What Is True Affordability?

Over the past decade, lenders and the media had many of us believe that affordability simply means qualifying to make a purchase in cash or through a loan.

Of course, this ended up with some pretty dire consequences, most saliently being the alarming number of Malaysian households that are now in the red.

The problem begins when we confuse eligibility with affordability, whether you are considering taking out a home loan or testing your credit card’s limit at the Apple store. 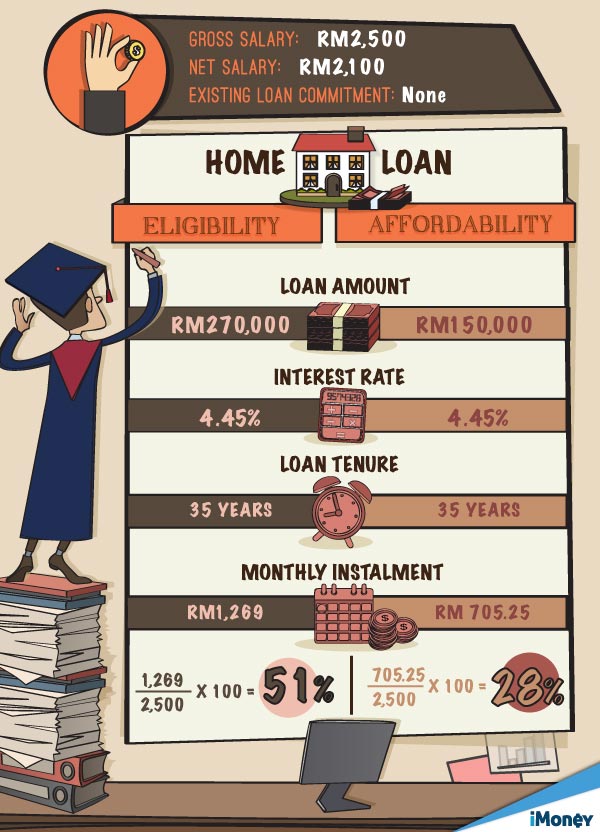 Let us first take a look at eligibility: For example, a fresh graduate earning a starting salary of RM2,500 (an estimated net income of RM2,100), and with no existing monthly loan repayments is eligible for a home loan amount of up to RM267,991. With 4.45% interest and over a 35-year tenure, he will have to fork out a monthly installment of RM1,260 – that’s over 50% of his monthly gross income!

On the other hand, when we take affordability into context, the golden rule is that your monthly home loan instalment, including principal, interest, real estate taxes and homeowners insurance should not exceed 28% of your gross monthly income to avoid getting sucked into bad debt or risk foreclosure. If you earn a gross starting salary of RM2,500, your monthly home instalment should not exceed RM700.

What this really means is while the fresh graduate may be eligible for a home loan, he may not be able to actually “afford” it. Besides his home loan repayment, he will also need to factor in other aspects such as property assessment tax (cukai pintu), quit rent, strata title, maintenance and utility bills into his budget.

Prices have a way of going up from year to year, which means that many of the goods and services we purchase today will cost more next year and the following one.

The increase in prices, also called inflation, results in a decline in the purchasing power of your hard-earned Ringgit. For example, sugar prices went up about 96% from RM1.45 per kilo in 2004, to RM2.84 this year.

According to The Star, Malaysia’s inflation rate rose by 2.8% in October 2014 from one year ago. Meanwhile, consumer price index (CPI) in November 2014 increased by 3% to 111.9 compared with 108.6 in the same month last year. Inflation rate is measured by CPI.

According to the same report, the increase was attributed to the rise in index for transport (up 5%), restaurants and hotel (up 4.3%), housing, water, electricity, gas and other fuels (up 3.5%), health (up 3.45) and food & non-alcoholic beverages (2.9%). These six groups of goods and services contributed 96.6% to the increase in CPI for the month of November this year.

Generally speaking, growing inflation rates commonly have an inverse relationship with true affordability. However, findings from the Household Income Survey 2012 revealed the mean monthly household income in Malaysia has increased by 7.2% annually from RM4,025 in 2009 to RM5,000 in 2012.

When compared to a yearly inflation rate of under 3% on average, these figures indicate that the purchasing power of Malaysians has actually risen by at least 4% per annum from 2009 to 2012 (Believe it or not!).

Despite the rise in purchasing power, mismatched expectations and lack of general financial knowledge had (mis)led many Malaysians into financial mismanagement and ultimately, into the debt trap.

How much are we paying for debt?

The acceptable level of debt-service-ratio is about 30%, meaning that a household should not be spending more than one third of their income on debt repayment. However, 2012 statistics revealed that the debt-service-ratio of households in Malaysia stood at 43.5%, which means that Malaysian households use more than two-fifth of their monthly disposable income on average to service their loans, The Star reported.

More alarmingly, the estimated debt-service-ratio of civil servants in the country at around 60%.

With some 60 Malaysians declaring bankruptcy every day, there is a growing concern locally about household debt. According to statistics from the Malaysian Department of Insolvency, some 19,575 cases were categorised bankrupt in 2012 alone.

Effective money management is imperative to ensure that one does not fall into the lethal debt trap.

How much should we be spending or saving?

Whether you are a parent with two kids or a fresh college graduate working on your first job, the 50-20-30 money management guideline can help you figure out how much you might want to allocate to each area every month, as well as to determine the order in which your money can be allocated. The guideline basically breaks down all your expenditures into three categories: Of course, all guidelines are as they are – just a guide. That said, they can be a helpful benchmark when you are assessing where your money is going. Understanding affordability and its true implications is important to help you make important money decisions and to adjust your budget according to your lifestyle and long-term goals. Think sustainability when  making any financial decisions.