Full-time workers in Kuala Lumpur can’t afford a three-bedroom rental condominium in the city centre, without spending more than the recommended 30% of their income.

Based on the recently released Household Income And Basic Amenities Survey 2016 by the Department of Statistics Malaysia, the average monthly income in Malaysia stands at RM5,228 in 2016 compared to  RM4,585 in 2014. That’s a 6.6% growth rate.

Despite recording the highest median household income in the country, workers in Kuala Lumpur are still struggling with rental affordability.

According to Global Property Guide, the gross rental yields in Malaysia overall have fallen significantly from gross returns of 8% two years ago, to 4.5% for condominiums of 120 square metre. Although, investing in these properties are less attractive nowadays, the average rental is still above 30% of the average monthly income.

There’s really no golden rule to how much you should spend on rental because it all depends on where you live, work as well as how much you earn.

However, the general rule of thumb for rental is not to exceed 30% of your income. This is based on a law passed in 1969 in the United States where the rent in public housing was capped at 25% of residents’ income. This “rule of thumb” has now been increased to 30% by many.

Below we compare the median household income and average housing rental for Kuala Lumpur city centre to other neighbouring cities within the Klang Valley:

Based on a report released by Khazanah Research Institute in 2015, Malaysia’s housing market is deemed “seriously unaffordable”, where the median house price is 4.4 times median annual household income. With high property prices, the rental would likely follow suit.

Here’s how much of the median household income in Kuala Lumpur rental will take up in the city centre and its surrounding areas in the Klang Valley: 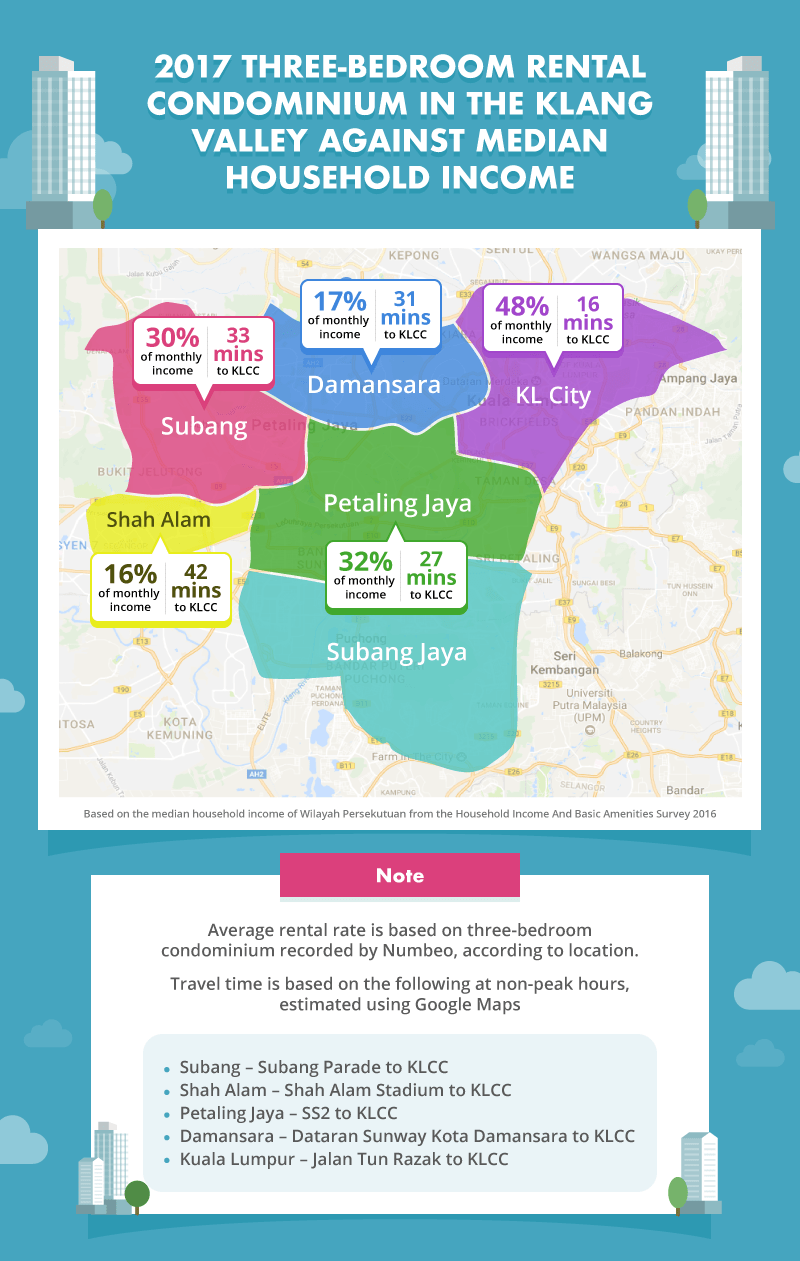 Rental in Shah Alam has the lowest percentage of income compared to other cities in the Klang Valley. However, it has the longest commute to the city centre. If you are working in KLCC, you will likely spend more than an hour driving each way during peak hours.

If you are driving a Honda City with the estimated fuel economy of 7.5 litre per 100km, your monthly fuel consumption to and from work would be as follows:

Although you pay less in rental if you live in Shah Alam and work in the city centre, you would be paying RM141.40 more in petrol. However, the average rental in Kuala Lumpur city centre is RM4,338.97 a month, according to Numbeo, while in Shah Alam it is only RM1,433.33. That’s 67% difference in rental. This does not include the cost of car maintenance in the calculation, which can be higher due to the longer commute.

Overall, it will still be cheaper to live in Shah Alam and commute, rather than renting in the city centre. However, you will be spending a lot more time on the road.

How much should you be spending on rental?

For one to afford a 3-bedroom condominium in the city centre, he/she would need to rake in about RM14,500 a month.

However, a quick search on iProperty shows that a furnished 3-bedroom condominium around city centre ranges from RM4,000 to even RM15,000 a month!

The rental for metropolitan Kuala Lumpur was not surprising, but shocking nonetheless. Despite it being the renters market today, rentals are still beyond affordability for the average wage earners in the city.

It’s a grim outlook for renters and the above numbers show sobering disparities between income and rent.

For those working in the city centre, they are caught between a rock and hard place when it comes to renting. Should they cut their rental by renting further or should they prioritise quality of life and opt for shorter commute?