Most people think the cheaper solution to cutting costs when it comes to reunion dinner, is to cook the feast themselves. However, nowadays, the difference in costs of cooking dinner at home and having your family gathering at a restaurant are not significant.

Traders expect the prices of food to spike up between 10% and 20% yearly during the Chinese New Year period, while a weakened ringgit and GST add on to the financial burden, as reported by the The Malaysian Insight.

It was also stated that retailers have turned to expensive imports from Australia, New Zealand, Korea and countries other than China, after consumers were alarmed by news of fake food from the country as shared on social media.

Meanwhile, last year, the Federal Agricultural Marketing Authority (Fama), revealed food items such as cabbage, meat and seafood went up by 50% within a week due to weak currency and the monsoon season!

So, if you thought of a do-it-yourself reunion dinner, think again –  you’re essentially paying more or the less the same amount for a stressful affair, rather than relaxing and enjoying the dinner at a restaurant.

However, if you’re still not convinced, maybe one of these CNY promotions we’ve listed will catch your eye.

Here are nine that will fit the bill and fill everyone’s stomachs.

Instead of the usual set menus, how about trying a buffet?

You don’t have to argue about who has the last piece of chicken, because if your plate is empty, just fill it up again.

Additionally, many buffets have specialised stalls where you can customise food according to your palate and satisfy even the pickiest of eaters.

Here are a few affordable ones right up your alley, which are great for big families with even bigger stomachs.

The annual buffet takes place at the Sime Darby Convention Centre and features traditional Chinese cuisine whipped up to signify traits of prosperity, luck and friendship to start off the new year.

Certified as a halal restaurant well-known for its dim sum, the spread will feature traditional dishes such as the classic prawns and herbal chicken.

It might not be your conventional restaurant setting, but the hall can accommodate up to 200 people with private rooms able to fit up to 40 people. 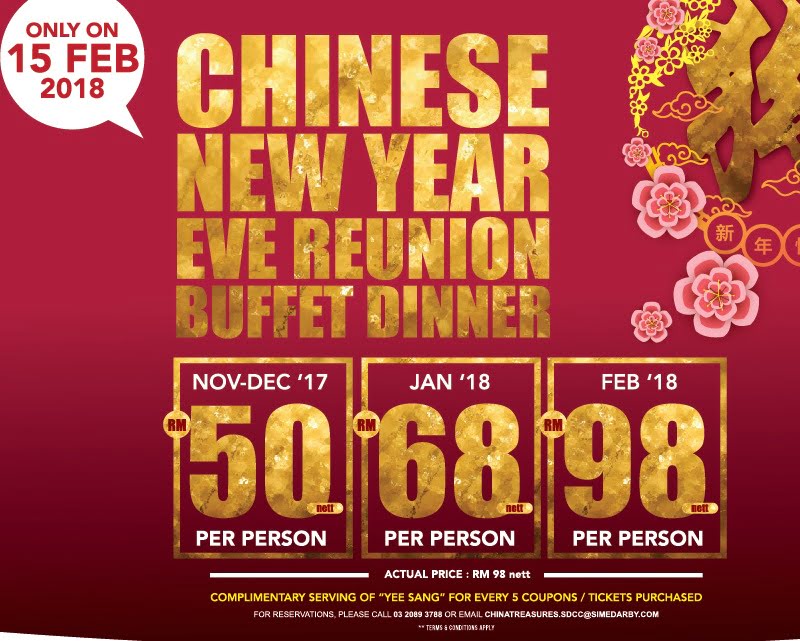 Tickets for the buffet retail at RM98, but if you book in January, you can enjoy an early bird price that entails RM30 off.

If you’re the impatient celebrator, then you can head to Empire Hotel Subang where the buffet lines have already started in conjunction with CNY.

However, you don’t have to limit your choices to just Chinese cuisine as they serve other dishes from barbequed goods to Japanese food.

You can also create your own Yee Sang at their specialised stall with fresh and natural ingredients.

Family sets under RM150 per person

Now, let’s move on to the usual CNY set menus. Banquet-style set dinners are generally more expensive, compared to buffet dinners. However, we’ve combed the market and found some value-for-money set dinners from as low as RM88.80 per person, up to RM150 per person.

You’ll find nothing short of Chinese tradition here having been established since the 1990s. The restaurant, located in Ampang, serves fresh food straight from their own fish tanks.

You would be delighted to know their all-time famous dish – the Chilli Crab –  is included in one of their CNY sets as shown below.

Besides that, you also can savour dishes featuring salmon, salty chicken and grouper fish for RM88.80 (excluding GST and service charge) per person! 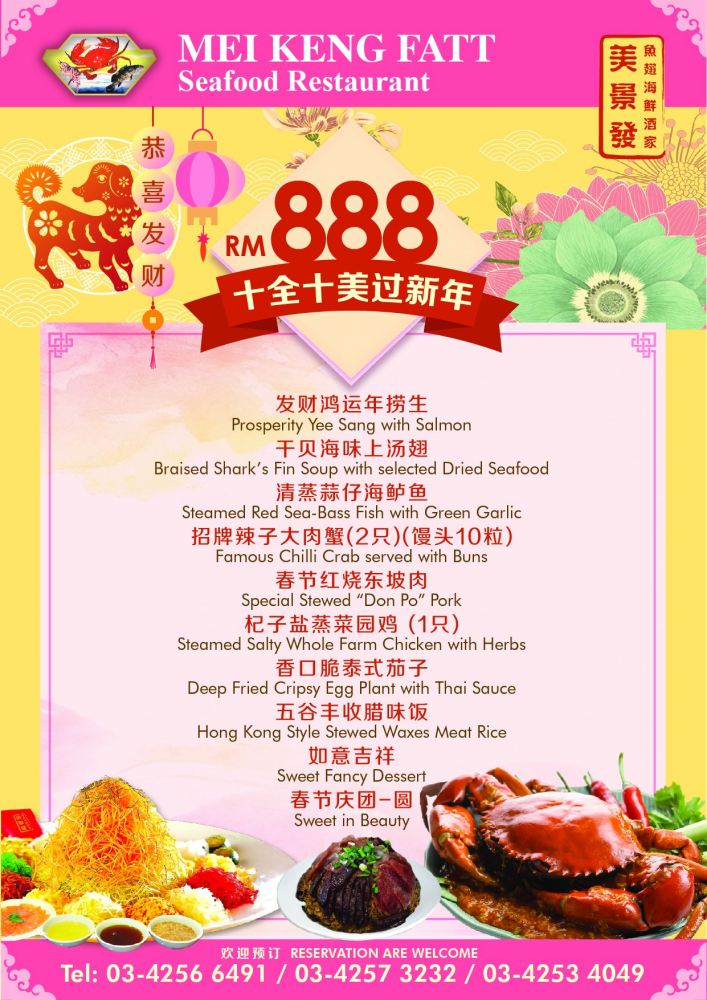 Voted the largest chain of Chinese Restaurants in Malaysia, this list would not be complete without Tai Thong. Known for their Cantonese cuisine, they house exceptional chefs who skillfully preserve the traditional flavours but add a subtle twist of modernity to classic dishes.

The restaurant chain caters both pork and pork-free outlets listed here and is perfect for a family gathering with their homey ambience.

With their sets, you’ll get fusion-type food such as Snow Pear Yee Sang and Iberico Ribs in Champagne.

Here’s a preview of the set menu available at their pork outlets: No frozen seafood here folks, because Unique Seafood is known for its spectrum of tanks filled with seafood such as Alaskan crabs, clams and of course, fish. You won’t have that icky after-taste of preserved seafood because it’s straight from the tank and into the wok!

The restaurant, which has several branches listed here, describes itself as “casual and comfortable” and the reviews seem to agree with this fact too.

Here are some of the sets being offered, where you pay no more than RM100 per person at their Subang and Petaling Jaya outlets. 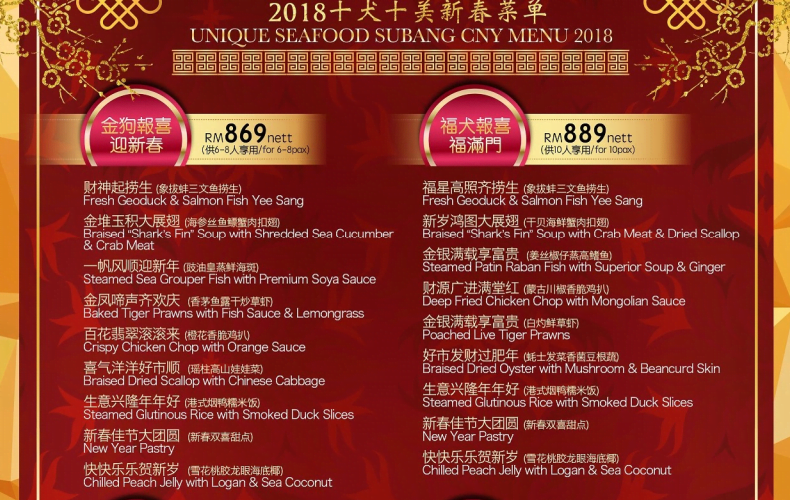 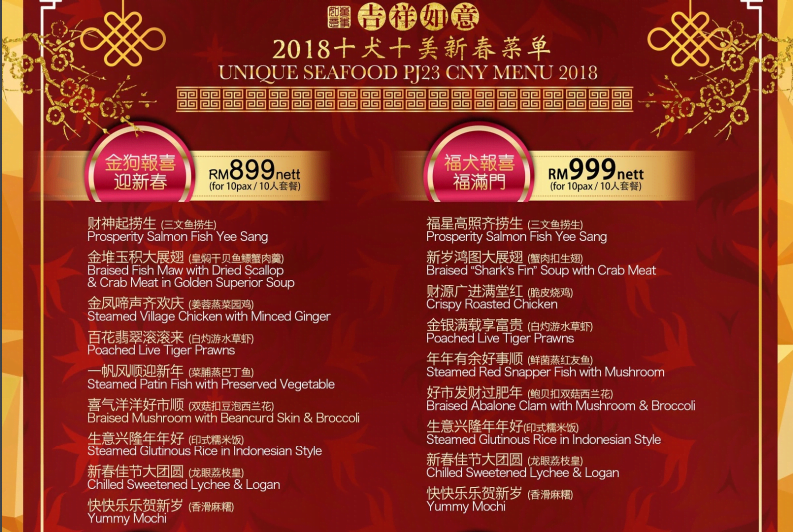 The chef serves secret recipes made with top-secret techniques that will have your family drooling for more.

Another plus point is that, its set-up isn’t over-the-top and is just right for a homey, wholesome meal surrounded by furniture with classic Chinese accents.

Enjoy a red snapper, or maybe a grouper fish and end your meal on a good note with their chilled longan for less than RM140 per person. 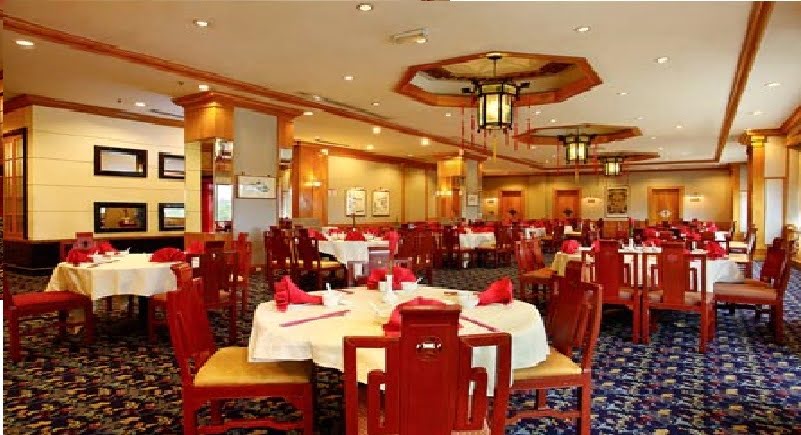 Curated for a family of 10, here’s what you can expect if you opt to book their menus:

Head over to their website here for more details.

Want to feast on award-winning food? This restaurant serves a modern touch to traditional Chinese cuisine with a seal of approval backed up by their long list of awards.

Here, you won’t have to spend more than RM126.80 per head (excluding GST and service charge) for a set menu filled with specialties such as steamed glutinous rice or deep fried soft shell crab in money bag. 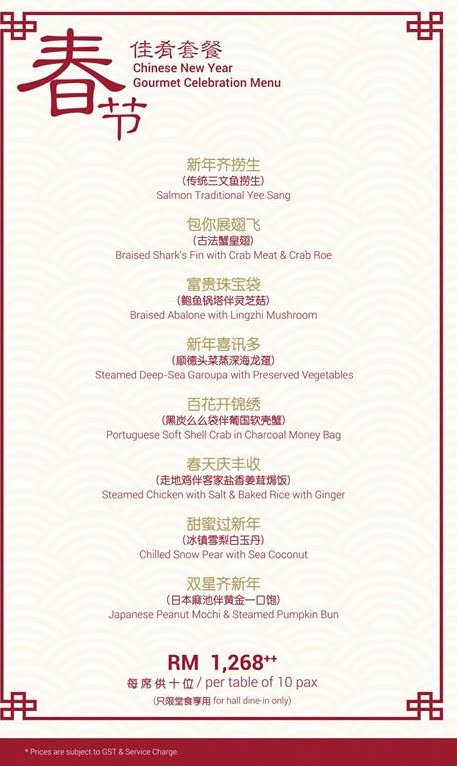 Gourmet Cantonese food, premium fresh ingredients – a recipe for a great dinner you can enjoy at Grand Harbour.

The restaurant, which has been established since 2012, are known for their barbequed meat, herbal soups along with an array of dim sum.

To top it off, their classy and modern venue are designed to fit family occasions from weddings to, you guessed it, CNY.

We’ve picked out two of their set menus you can get in their Kuala Lumpur and Selayang outlets for under RM110 (excluding GST and service charge) per person which features sea prawns and crispy Nian Gao! 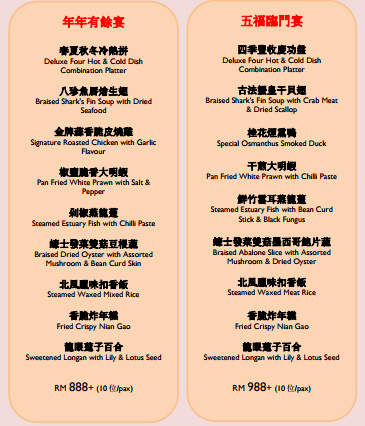 Get your seats early and get more details here.

With a menu of traditional Cantonese cuisine, the food tastes as good as it looks at this restaurant located in Dorsett Grand Subang. A classy setting decorated with oil paintings, it may seem a little out of budget at first sight.

Nevertheless, you can indulge in their CNY set menu for under RM140 per person.

You can also get a lucky red packet filled with hotel vouchers from their ‘Tree of Prosperity’, when spending RM688 in a single receipt – which is a sure thing if you reserve one of the set menus below. 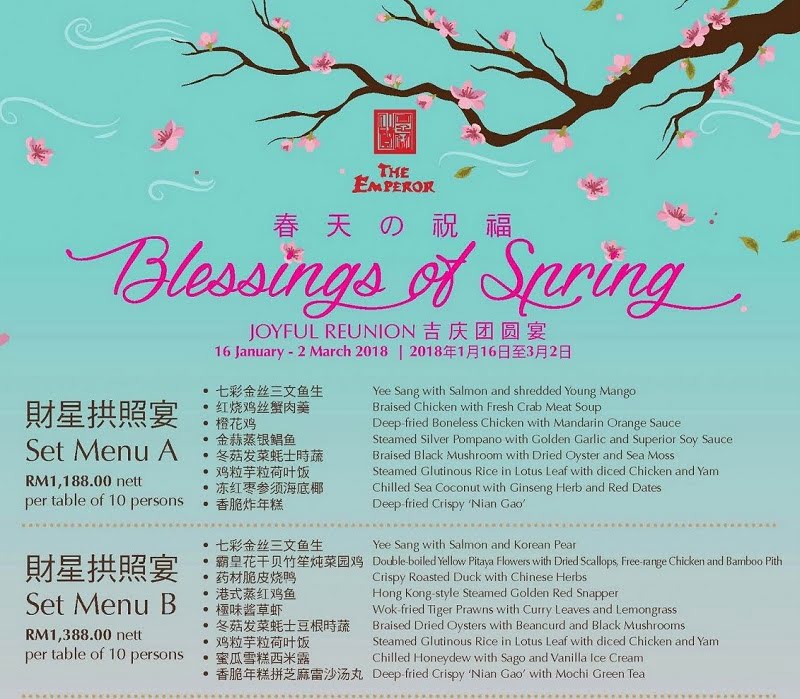 For more information and to check out their full menus, check them out here.

But, you better book early!

The reunion dinner is probably, the most significant time of the traditional festivities. It could be the only time of the year you see any of your relatives as it’s better to usher in the new year together.

However, it’s also better to ring in the new year with a healthy financial wallet, so we suggest you book early to avoid disappointment and enjoy these deals.

CNY promotions, especially ones that are considered within the affordable range, sell out as fast as freshly baked pineapple tarts (another must-have every CNY) – you’re not the only one aiming to save a little bit of money.

Here’s a few of our saving tips for you to keep in mind:

So, with that being said, we wish you a prosperous New Year and all the best in the Year of The Dog!