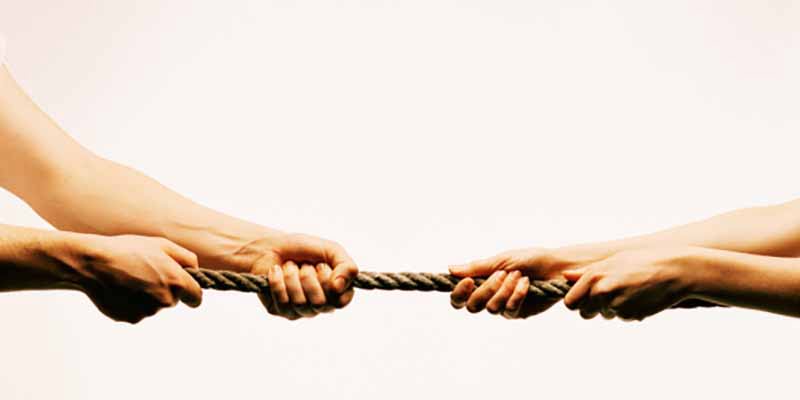 Outplay The Power Play In Your Marriage

He works but she doesn’t, or perhaps she does, and he stays home. How about when the income scale tips lower on one side than the other? And there’s also the couple with the family of one spouse being wealthier than the other.

All these are common situations that can lead to a power play within a marriage. A power play happens when the earner or the one with access to more money dictates the spending priorities in the family – which can mean making most major family decisions.

Power plays can get ugly and over time lead to resentment and eventually the breakdown of a marriage.

These situations can make it easy for the spouse with more income to initiate a power play and dictate how the money is to be spent. Some even go as far as calling it financial bullying. This can be multiplied when the other spouse is unemployed or underemployed, adding salt to the wound.

Some of these marriages may not end in divorce, but constant fighting about money problems and the tension that ensues can kill whatever happiness the couple once envisioned when they said “I do”.

The power struggle is real

How does money trigger a power play? Some couples can successfully navigate through their marriage without any power struggle – perhaps they have reached equal footing in their relationship, or perhaps one half doesn’t mind not wearing the pants.

According to Dr. Johnben Loy, the founder and clinical director at Rekindle Centre for Systemic Therapy in Desa Sri Hartamas, power comes down to the issue of safety.

Although a power play is not unheard of in Asian families, it is not a common topic of discussion when it comes to marriage. It happens, it’s just not something Asian families recognise or talk about.

“A power play is actually not a usual topic, especially for Asians. Westerners are clearer when it comes to recognising a power play situation,” Loy adds.

Certain marriages work without a power struggle because both the husband and wife hold different areas of power, and some have more impact than others.

Loy explains, “Finance has a lot more impact than say, parenting. I’ve seen a couple, where one handles finances and does not share with the wife what is going on, while the wife handles parenting, where she restricts the husband’s access to the children.”

The question is, what is the level of transparency and communication should couples try to achieve, and when does it begin?

“It really needs to begin early on. Believe it or not, we usually fall in love with people that represent someone in our past. And it is not always someone healthy in our past. Sometimes you could be falling in love with someone who is like a father that was very distant and aloof.”

The reason for this repetitive cycle is, we tend to fall in love with the same type of person we are familiar with, because he or she is someone you are used to, or perhaps, you are trying to make up for your loss.

“You are not really aware of what you are going into. You could enter into a power situation whereby you lock yourself and become submissive again,” says Loy, adding that this phenomenon is quite common, because human beings play roles and continue to play the same role in life.

Getting to the root of the problem

A power play is a deep-rooted problem, but is there a way to avoid or resolve it?

According to Loy, couples can’t just avoid it and sweep it under the rug. What they can do is open up the conversation right from the beginning, then at least the issue can be managed better.

“Sometimes, you just have to say “no” to certain relationships that are abusive.”

When it comes to money, a joint approach typically trumps managing solo. Income power shouldn’t automatically confer decision-making power, because it’s been well documented that men and women, often have different but complementary financial skills that work better together than separately.

This is especially important for us Malaysians as it’s hard to avoid a power play as the situation is likely to arise due to our cultural make up. For Asian families, it’s the norm to have the husband work while the wife stays at home. Of course, this is also evolving.

“With the typical example of the husband works and the wife stays at home, we have to think about the generation they are in. Are they in their 30’s or 50’s?”

Different generations view power (which often equates to money) differently. An older couple may be comfortable with unbalanced power between them, while a younger couple may not be so accepting.

Loy gives an example of how setting the right expectation early on is important to avoid power play:

I have an American Chinese friend, who used to work as a manager in a multinational company. She and her husband are both professionals and after they got married they had three kids. She decided to quit and stay at home to take care of the family.

She said to her husband, “Okay, let’s see the value of what I do.” And she started calculating. Then, she said, “If you were to pay me to do what I do, as a full-time mum and wife, you will need to pay me about RM230,000 a year. That is my value.”

That is an interesting way to ensure your value in the family is acknowledged and appreciated. However, will it work for families that have fallen into the power play relationship dynamic for years?

In the anecdote shared by Loy, education and career make a difference. The wife in the example was seen as sacrificing her career to care for the family. She was showcasing the opportunity cost of staying home when she could be working. This is one way to show her value.

The key here is to be able to represent your value clearly to your spouse. Not everyone can be in the same scenario as above but there are other ways to do it.

“I would say the best way to go about this situation is to do something to make yourself valuable. It could be something as simple as baking to generate some side income because you need some kind of economic value.

“If you don’t have an education, and you have the support from your husband, then get an education. There is now Open University, which allows part-time courses. It is less and less a taboo for someone in their 30’s to go to the university now.”

It may seem little but when you show that you have economic value in addition to your other responsibilities, it’ll help resolve a power play scenario.

The power play has become more prevalent in Asian families today, especially with change in society over the past three decades. With technology like the Internet, culture has become more globalised, and people in the East have become more aware of gender equality and other idealogies that were uncommon in Asia before.

“Change has come about so quickly. We are exposed to Western ideologies and there is so much societal pressure on women to come out and be on their own.

“To add to this, women’s perception of themselves are changing but the men are not changing along with that, or at least, not at the same pace.”

This inadvertently results in power plays that leads to resentment, especially if one of the spouses holds more traditional values than the other. Will counselling be able to help?

“I don’t think in a power play situation, the one in higher power will be open to counselling. However, the wife [assuming the wife is the one unhappy with the power play] can come for counselling separately to find out how she can manage that situation.”

Is a prenuptial agreement the neutraliser?

The society often has a skewed views on prenups, looking at it as a means to protect the interest of the wealthy in the worst-case scenario. However, a prenup can also be very useful for those wishing to maintain a healthy family dynamic in the unfortunate circumstances of a relationship breakdown.

Will prenups work to avoid power play? Does it fit into the Asian marriage dynamics?

“I don’t have enough research on overall whether it’s a good idea or not. I have seen couples who have been negatively impacted by prenuptial agreements.

“For instance, I know a woman who was struggling a little bit financially, and her husband was very comfortable financially but would not let her know what his ability was in helping her. She just had no idea,” Loy recalls.

“The issue was not so much about wanting money from her husband. The problem was why she still felt financially insecure when she had a husband who is comfortable financially?”

Some may want a prenup because they have gone through some nasty marriages that become messy in the absence of a prenup.

“In the example above, the husband wanted a prenuptial because he had a lot of money, and he suffered a lot financially from a previous divorce. I understand why he wanted the prenuptial agreement because he had been through previous pains. He wanted to protect his assets,” Loy adds.

There is no hard-and-fast rule to a prenup but there are situations and circumstances that warrant a prenup, and it all depends on the couple and how they talk things through. One thing’s for sure, it’s not just for the wealthy. Anyone who doesn’t want to risk their assets (whatever the amount) in case of a failed marriage would find a prenup the solution.

Love can often make you do crazy things. However, it shouldn’t blind you from issues you are facing, or may face in your marriage. Many couples won’t see this issue crop up now but in  ten or 15 years down the road, your marriage may not turn out like how you envisioned it to be when you first said “I do” to your other half. Hence it is important to ensure you pave the road to a conflict-free and happy marriage from the beginning. And addressing power play scenarios as early as possible is important. Be sure to talk about this with your spouse as ultimately, communication is the key to a successful marriage.

If you are facing serious conflicts in your marriage, get advice from counsellors who are trained to help relationships.

One way of managing your family finances well is through using the right credit card. Apply for one, and get a supplementary card!