Home › Latest Articles › Income › Earn More Or Save More: Which Is Better For You?

Earn More Or Save More: Which Is Better For You?

If you ask gurus of the personal finance world, most say that focusing on earning is more powerful than saving more money.

“If you want to be rich, I encourage you to change your mindset about money — and start focusing on earning,” says Robert Kiyosaki, author of the bestselling classic “Rich Dad, Poor Dad.”

I can’t disagree — but while earning more money is useful, I think saving money is seriously underrated. Crucial to financial success for everyone — rich, poor and middle-class — but underrated and misunderstood.

Of course, there needs to be a healthy mix of both. But depending on your personal situation, you can adapt your focus to either saving more or making more.

Why saving money is so important

Saving money is important because most people don’t have savings. They’re one emergency away from debt — or being unable to pay the bills. Scary statistics from the EPF back this up:

“98% of rural households have zero savings, while 86% of those in urban households do not have savings… one in three Malaysians does not have a savings account.”

But saving money gives you security. It gives you a secure base to start growing your money. And peace of mind to handle emergencies. It also prepares you to handle larger and larger sums of money.

If making more money is like driving a Ferrari, learning to save money is like taking up driving lessons in a small Proton. Yes, you can go super-fast in a Ferrari — but you’ll crash if you don’t master the basic driving skills first.

When is saving more money not the best approach?

1. When you could be spending your time and energy better elsewhere

Trying to squeeze more money isn’t the best approach when you’re already financially stable. For example, if you’ve already got one year of monthly expenses in the bank. No credit card debt. And 25% of your salary automatically invests itself in fixed deposits.

In other words, you’re already in great financial shape.

Would it then be useful for you to check fixed deposit rates from the banks every day? If your RM20,000 (US$4,760) in fixed deposit is getting 3.60% in Bank A, and Bank B has a promotion for 3.80% — should you take the trouble to go to the banks and switch? Yes, the difference is RM40 per year — but is it really the best use of your time and energy?

There’s a difference between being frugal and miserly. And while I hope you’re careful with your money — I don’t want you to spend your life trying to squeeze 20 cents more out of every single situation either. That won’t make you rich; it’d make your quality of life much poorer.

Instead, if you’re already financially secure — the way to more financial freedom isn’t in trying to save more of what you currently make. It’s in finding better ways to earn more money.

2. When you really can’t save any more

On the flip side, let’s take the other extreme. Let’s say you’re dirt poor and have a family of six to feed. You’re already extremely frugal with your money: you don’t eat at restaurants, you use a motorcycle to work, and you sweat yourself to sleep every night because you don’t have an air-conditioner.

Yes, more savings would be great for you. It would give you security. But where are you going to save more money from? You’re already saving everything you can. The advice to “live frugal and save more money” here is borderline useless. In fact, it’s offensive.

(Word of caution: If you come from a privileged background, don’t ever tell poor people that “Saving money is easy; all you need to do is…” I’ll smack you myself.)

When you’re poor, trying to squeeze more money out of small earnings doesn’t help much. To improve your quality of life, you’re really going to have to make more money. 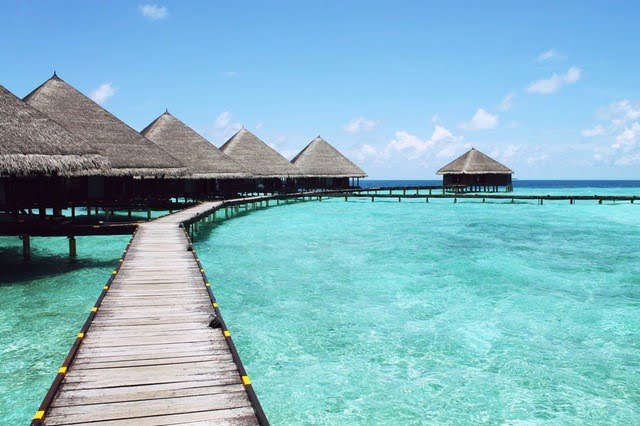 No, saving 10% of my salary isn’t going to get me to Bora Bora. Image from Pexels.

Why earning more money is so important

There’s a saying in corporate circles that goes like this:

“Revenue covers a lot of sins.”

It means that when a company is making lots of sales (and profits), people care less about the company’s costs. But when the company doesn’t have good sales to cover its expenses, that’s when people start scrutinising the business for flaws. That’s when employee benefits get cut, and people get laid off.

The same principle applies to personal finance. Consider the two situations below:

In the first situation, RM200 is 10% of the guy’s salary. Which is way too much for a haircut, if you ask me. (Even if the shampoo girl is really pretty.)

But in the second situation, yes the haircut is still expensive — but it’s really only 1% of the guy’s salary. He could go for five haircuts every month, eat at cafes every day, and still have 25% of his salary left for investment and savings.

Most of us have a stable “fixed cost” every month. How much we pay for our home loan, children’s schools, and insurance doesn’t usually change. Ideally, we should be earning more than our “fixed costs,” and putting the balance into savings and investments. Something like this: 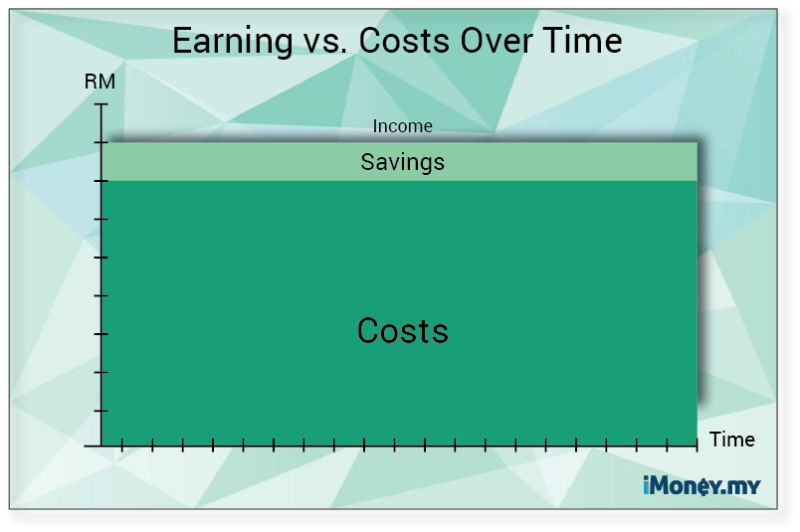 But if you made a lot more money (and kept your costs under control), your graph would look a lot more like this: 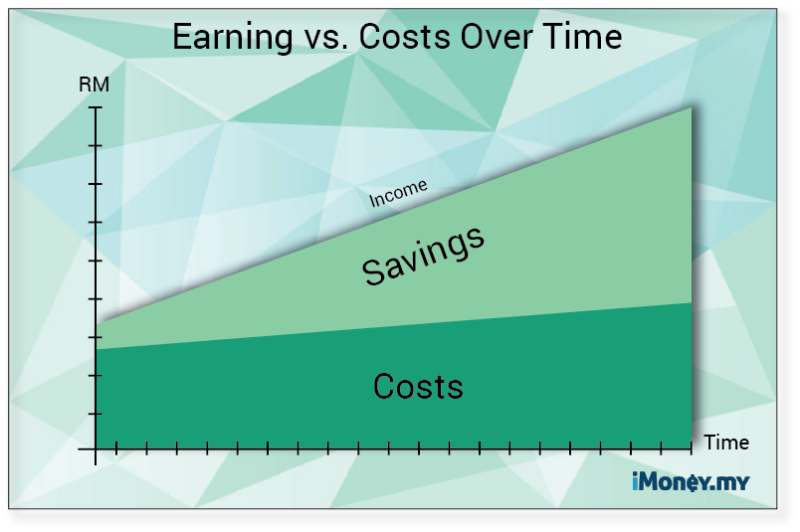 Notice how the blue section of Savings has grown huge compared to the first graph. Accumulate enough here, and really cool things can start to happen — like financial freedom and early retirement.

The best thing about earning more money? Depending on your abilities, your potential to earn money is unlimited.

But the challenge that comes with earning big money is this: can you control your spending?

When is earning more money not the best approach?

The above might sound like a stupid question, but it’s one that every high-income earner needs to ask. Because focusing on earning more money is not the best approach when you have no financial discipline.

The problem is, a lot of people have this simplistic view that making lots of money would solve all of their problems.

But it’s not true.

While money can help solve basic needs like shelter and food, it can’t solve deeper issues. Money just amplifies what you already are. If you’re a reckless gambler with money, having more money will make you an even bigger gambler. If you blow money irresponsibly when earning RM5,000 — you’ll blow even more money when earning RM15,000.

Live below your means – regardless of situation

If we oversimplify personal finance, saving money would be as simple as:

But interestingly, the rule of not spending more than you earn applies regardless of whether you earn RM3,000, RM30,000 or RM300,000. Think there’s a point where you earn so much money that you’ll never be able to spend it all?

If you don’t have good control (and most people don’t), your lifestyle can quickly catch up.  Maybe you have a wife who’ll help you spend all your money. How much do you think a Birkin handbag costs? 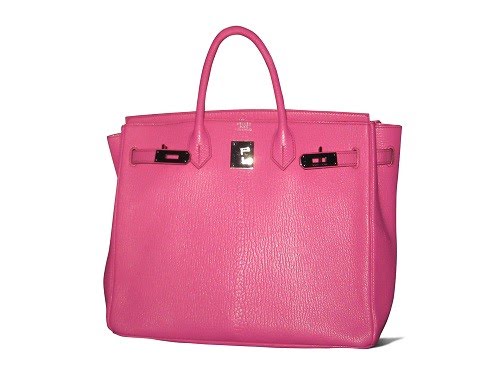 There are also countless examples of sports superstars, actors, singers and lottery winners who’ve all made big money — yet somehow ended up bankrupt.

How did this happen? Using our car analogy from the beginning of the article, these people skipped Proton driving school and went straight to ultra-fast Ferraris. They never mastered the basic skills first.

They never learned to build financial discipline and save.

There’s a difference between making money and keeping money.

If you’re making big money, but not able to save/invest any — it’s time to focus on being more disciplined. If you’re already extremely frugal, but your finances still aren’t strong — it’s time to find ways to make more money.

It’s been tough for me to write this article because I keep having to tweak my points. I don’t want to overemphasize either one, or make it seem like the other is unimportant.

Ultimately, both making money and saving money are important. But like most “adult” things in life, it’s balance that makes all the difference.