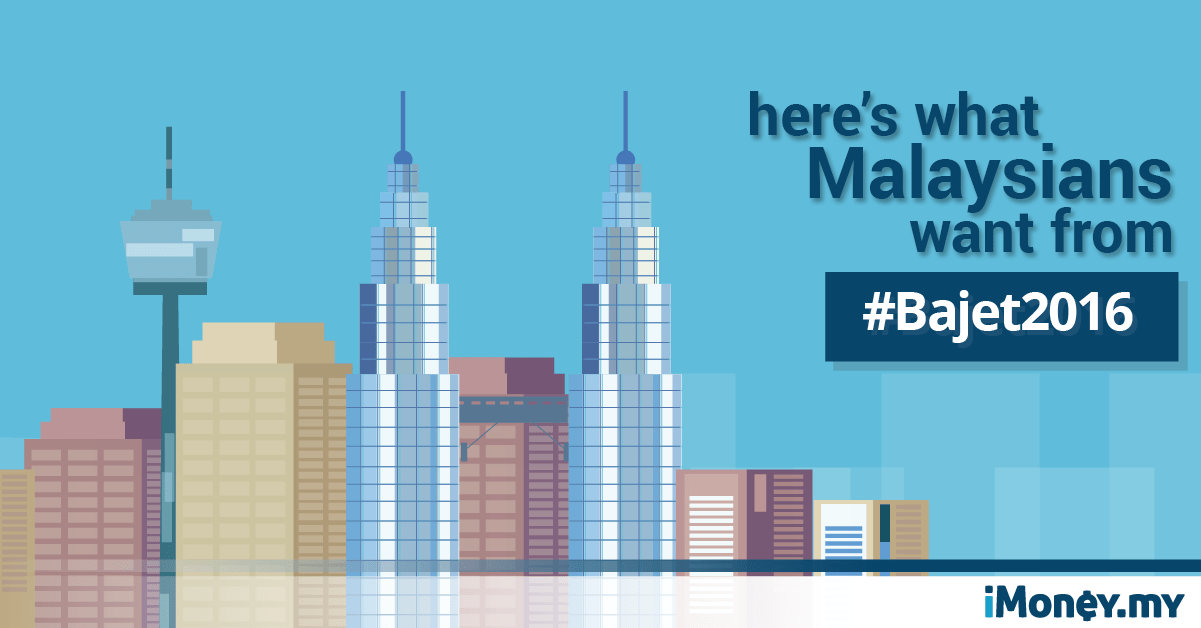 Budget 2016 Survey: Malaysians Buckle Under The Rising Cost Of Living

As Malaysia draws closer to the tabling of Budget 2016, how far a Ringgit goes and whether Malaysia is on the brink of recession are among the major issues for the rakyat, according to our Budget 2016 Sentiment Survey.

The cancellation of subsidy for fuel, weakening global economy, tumbling currency and political instability have further exacerbated the rising cost of living, which is found to be the biggest concern among Malaysians.

Earlier this month, we’ve asked more than 2,000 Malaysians what their main concerns for the upcoming budget are, and we receive overwhelming responses that indicate all is not well with our pockets.

We found the rising cost of living (87%) was the pre-eminent concern for Malaysians, while 39% was still apprehensive over the high property prices.

Unfortunately, the rising cost of living has a knock-on effect on other areas, such as housing affordability. Inflation has picked up considerably since the 6% GST went into effect in April. Combined with the weakening Ringgit, Malaysia’s inflation in July spiked at 3.3%, and abated slightly in August, at 3.1%. Cracking under the weight of rising cost

The implementation of the 6% consumption tax in April this year had many Malaysians reeling from the sudden increased in their expenses, shortly after the abolishment of fuel subsidy in December 2014.

All these changes in subsidy and tax have further shrunk the value of our Ringgit, with errant businesses taking the opportunity to make a bigger profit. This has made the average consumer the loser in the equation.

With 65% rated between eight and 10 (10 being severely affected) when asked how GST affect their finances, it is safe to say that not many Malaysians view GST favourably.

Spending on housing (38%), which includes rental and home loan payment, tops the expenses chart, while meals (33%), which includes groceries and dining out, follow closely behind. Despite housing being listed as GST zero-rated, other property expenses are still affected by GST, such as renovation services, electricity usage after 300 units, rental by GST-registered company, maintenance fees, and other fees. All these snowball into a substantial amount.

The Government has introduced the Bantuan Rakyat 1 Malaysia (BR1M) in 2012 as an effort to ease burden of the lower-income group in Malaysia. In the first year, RM2.6 billion has been disbursed to around 5.2 million household which represent about 80% of Malaysian household. The programme was continued with different quantum since then.

However, according to the BR1M recipients who took the survey, a resounding 93% said that the Government handouts were not enough to cope with the rising cost of living.

If BR1M is not the answer to the lower- and middle-income groups’ plight in coping financially, what is? What do the rakyat want from the upcoming Budget to help them manage better?

Majority of the respondents blame GST and its lack of proper execution for the escalating cost of living. 80% want the Government to reduce the GST rate of 6%, and 68% want the authority to step up on regulating prices to deter errant businesses from rampantly increasing their prices.

Slightly more than half (51%) want more subsidies from the Government, and not surprisingly, only 5% suggest more BR1M handouts.

House prices in Malaysia continue to rise, albeit at a slower pace following some cooling measures introduced by the Government and the central bank, Bank Negara Malaysia (BNM).

In 2014, the Real Property Gains Tax (RPGT) was made steeper at 30% for properties sold within three years to deter property speculation, or commonly known as “property flipping”. Other measures introduced by the authorities to correct the property market is the abolishment of the Developer’s Interest Bearing Scheme (DIBS) and BNM also introduced pre-emptive measures to make getting a home loan more difficult.

Despite the effort made by the Government, Malaysia’s housing market is still viewed as “severely unaffordable” with a median house price is 4.4 times median annual household income, Khazanah Research Institute (KRI) said.

According to experts, the maximum median range for housing prices compared to median income should not be more than three times the median income.

92% of our respondents think these effort did not make a big enough impact in correcting the market, and they are still not able to afford a home.

As income dawdles behind the increasing prices of daily essentials and properties, 42% of Malaysians are only able to afford properties that cost about RM160,000, which translates to RM850 in repayment a month. This is quite impossible to find, especially in Selangor and Kuala Lumpur, which are where 75% of our respondents reside now.

Even PR1MA homes in the Klang Valley cost more than RM200,000, which leads to 75% of respondents who have heard of it to think that it does not really address the issue of housing affordability.

More aid needs to be in place to help the rakyat to finally own a roof over their heads. The most popular suggestions are to lower the interest rates 38%) and criteria (20%) of home financing. Others want the tax relief (18%) on home loan interest rates and DIBS (13%) to be reinstated. The survey results aren’t random — the cost of getting by in Malaysia has been going up, and it spiked steeply with the cancellation of the petrol subsidy in December 2014. To add salt to the wound, the implementation of GST further increased the prices of things, pushing inflation up.

Although the appreciation of properties have slowed down significantly, the problem with the cost of living is still a huge deterrent in first property ownership, especially in urban cities. However, when it comes to this, the Government may find themselves between a rock and a hard place.

To curb property speculation, stricter housing regulations must be in place. However, these regulations seem to be deterring genuine first time home buyers from getting a home too. Perhaps, the authority should look at the bigger picture of how to help Malaysians manage their money better to achieve their goal of buying a home. This includes maintaining a healthy credit report, which can easily be done with a good credit card behaviour.

Will Budget 2016 be able to address all these issues? We won’t know until it is tabled in Dewan Rakyat on October 23, 2015. For now, we’ll just have to wait and see…

Want to know the complete results of the survey? Go here! Looking for way to cut your rising cost? Change to a credit card that will put money back into your wallet. Get started here.

The information and/or data from the Budget 2016 Sentiment Survey may only be rebroadcast or republished with full and proper credit and attribution to “iMoney Malaysia.” This survey was conducted between October 5 and October 15, with a sample of more than 2,000 Malaysians.