Why Did The Petrol Prices Increase Again?

Thousands of Malaysians queued up for fuel last Sunday ahead of a price hike, when the Domestic Trade, Cooperative and Consumerism Ministry announced that prices of RON95 petrol and diesel will be priced at RM2.05 per litre in June, up from RM1.95 in May.

Meanwhile, RON97 fuel is now priced at RM2.35 per litre inclusive of the Goods and Services Tax (GST), up from RM2.25 last month.

This follows the Ministry’s decision to set the market prices of petrol and diesel on a managed float, starting from December 1 last year. Under the managed float system, retail prices are based on the monthly average world price of crude oil.

Using this system, the average petrol price difference in the cost of the fuels in a month would determine the retail prices for the following month. 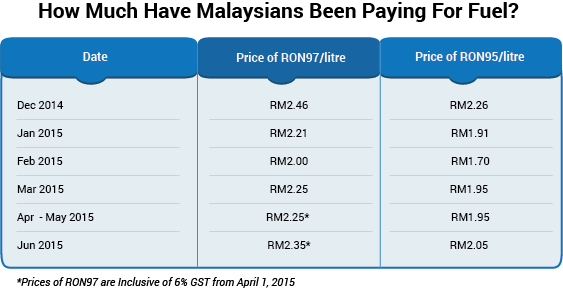 So one of the reasons why you are now paying more for fuel is simply because crude oil prices have gone up in the world market.

Brent crude oil prices fell to a five-year low in the fourth quarter of 2014 and early 2015 as robust global production exceeded demand. After reaching monthly peaks of US$105 per barrel in June, the crude oil benchmark fell below US$50 per barrel.

However, oil prices showed signs of rebounding in early May following a plunge in drilling activity, at which Brent crude oil traded over US$67 per barrel, the highest since December.

The price increase in May is why our fuel price escalates in June because the managed float system factors in the average price difference  in the cost of fuels in a month to determine retail prices for the following month. 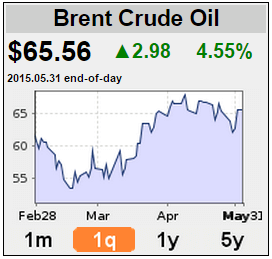 The month-to-month increment is unlikely to continue, though, as crude oil prices reportedly dipped again in the beginning of June as the market continued to be oversupplied due to the near record production in most oil-producing regions, including the Middle East, Russia and North America.

What this means is fuel prices in Malaysia could go down again in the month of July.

However, falling crude oil prices presents itself as a double-edged swords for Malaysians. On one hand, lower world oil prices will mean cheaper fuel for Malaysian drivers.

On the other, because the Ringgit’s performance is tied to oil prices, falling price of crude oil continues to put pressure on the Malaysian Ringgit, which traded at 3.7 against the US Dollar at this point in writing. In May, the US dollar increased to 3.6 Malaysian Ringgit from 3.53 in April.

The Ringgit’s depreciation coincided with the strengthening of the US dollar, and the dip in crude oil prices does not help sentiment on the Ringgit given that Malaysia is the only net oil exporting country in ASEAN. It is seen by analysts as one that will lose out the most from plunging crude prices.

However, being a trade-oriented economy, lower crude oil prices can bring about a positive knock-on effect on Malaysia’s exports, on top of more competitive pricing from the Ringgit’s depreciation.

With an optimistic outlook for economic recovery, a weakening currency can be beneficial if we can find a way to turn this monetary adversity into opportunity.