Basically, a hybrid car is one that uses an engine that is paired with one or more electric motors.

One of the biggest advantages that a hybrid car has over one that is powered solely by petrol is that it runs cleaner, which makes it more environmentally friendly. Also, since they are assisted by electric motors, they tend to be pretty good on fuel consumption too.

They’ve been quite a few hybrid cars that’ve come out over the years. We could safely say that it was all pioneered by Toyota’s famous Prius but we’ve come a long way from that. Today there are a whole range of hybrid cars from standard city cruisers all the way to racing beasts.

Recently, Toyota introduced its new Toyota Camry Hybrid to this mix and we’re going to look at whether buying a hybrid car still makes financial sense.

What’s in a full hybrid vehicle? 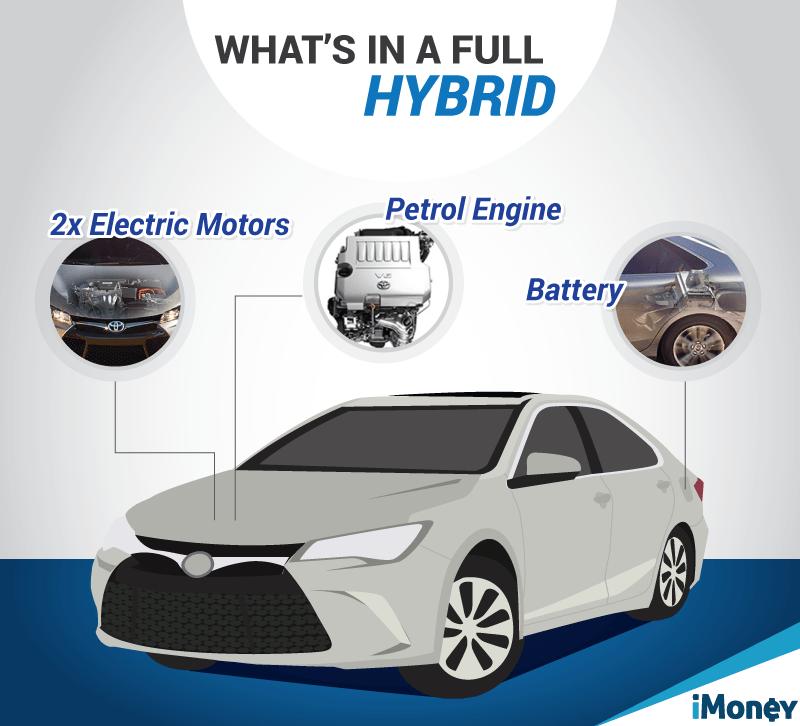 So why does buying a hybrid vehicle make financial sense?

Besides being more environmentally friendly, hybrid models also typically have better mileage as they run on both engine and electric motors that can work independently. This slashes fuel consumption quite dramatically (depending on how you drive).

Thanks to a system called regenerative braking, this electric motor never needs plugging in to charge as it receives all the charging it needs in normal motoring and through reclaimed energy whenever the vehicle slows or brakes (but not in a complete standstill).

As in the case of most hybrid cars, the energy harnessed from regenerative braking is sent back to the main battery, and then used to power the car or extend the electric-motor range, allowing the car to use less petrol.

Are they more expensive to buy?

For many people, the biggest drawback to owning hybrid vehicles is how much more it will cost to buy them. In most cases, hybrid variations of vehicles tend to cost more by thousands of Ringgit.

For instance, the Toyota Camry Hybrid costs roughly RM5,000 more than the Nissan Teana 2.5XV, its petrol-only equivalent of the same class.

But of course, there are exceptions to the rule. Compared to the Honda Accord 2.4 VTi-L, the Toyota Camry Hybrid actually costs RM3,300 less.


Going by this comparison, hybrid drivers can look forward to saving up to RM40 a month. That’s RM240 in six months, and RM480 in a year! This estimate is at present fuel prices (which are at an all-time low), so expect greater savings as prices climb back up.

Of course, these are just estimations but as Top Gear famously pointed out: if you drive a hybrid flat-out, you may not notice a significant difference in fuel efficiency, but in regular driving, most hybrids are significantly more economical than their petrol-only versions. Meaning that for most of us, a hybrid offers much greater savings since we are frequently driving at low speeds in cities.

This will go especially well for folks who are always on the road or when you’re driving long distances, as you will be spared the hassle of having to keep refilling your tank due to the hybrid’s regenerative system.

As cities switch their public transportation and service vehicles over to hybrid cars and buses to become more environmentally responsible, incentive programmes and special discounts have been established by governments around the world to support the purchase and use of hybrid vehicles.

There was disappointment when the government announced the discontinuation of import duty and excise tax exemptions. However, In January 2016 they changed their minds and announced an extension to this policy for hybrids and energy-efficient vehicles (EEVs) to promote the sale and usage of environmental-friendly cars here.

Thanks to these incentives, the Camry Hybrid currently comes with a competitive price tag of RM174,900  – which is pretty sweet considering that it also comes fully kitted out with a standard seven-inch touch-screen display audio with navigation, bluetooth connectivity for audio systems, a wireless charger, and a full-suite of safety features that include seven airbags, Blind Spot Monitor and Rear Cross Traffic Alert System.

The general perception is that by focusing on fuel-efficiency and lower emissions, hybrid vehicles typically sacrifice higher speed and power, which slows down performance.

This is not entirely untrue because compared to regular cars of a similar size, the petrol part of a hybrid’s engine is smaller (which means it has less power), and the electric motor is usually low power.

However, not all hybrids are built equal. For example, in a full hybrid car like the Toyota Camry Hybrid, the petrol engine and electric motors always run simultaneously, instead of alternatively as they do in some mild hybrid or micro hybrid variations. This translates to higher power efficiency and better performance.

For instance, Toyota quotes an impressive 7.8 seconds for the Camry Hybrid’s 0 – 100km/hour time. So it’s clear here that the Toyota Camry Hybrid is no push-over as other hybrid options like the Prius or the Lexus CT200h, which take more than 10 seconds. It’s only slightly behind other much more expensive options like the Audi A6 Hybrid by 0.3 seconds.

So what you’re getting is a car that delivers on power when you need it plus fuel efficiency for the rest of your driving time at a really great price point.

Given its competitive price range, environmental friendliness, EV mode and fuel-saving benefits, the Toyota Camry Hybrid is still a pretty sweet deal compared to other regular vehicles in the same range or even other hybrids out there.