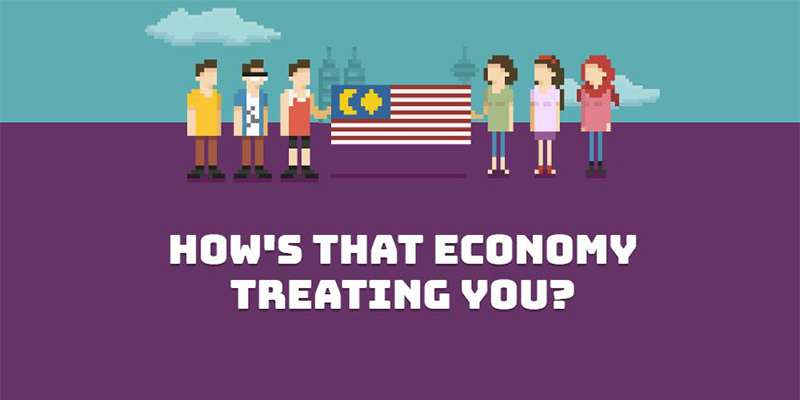 Imagine being on a treadmill going full power with a non-functioning On/Off button. Or swimming towards the lifeboat with the current going against you.

Both are very difficult situations to get out of. Unfortunately, both scenarios aptly describe how young Malaysians feel when it comes to dealing with the skyrocketing cost of living and the property prices that have risen relentlessly in the country.

Majority of the respondents in the Millennial Survey ranked high cost of living as their number one financial concern. The survey findings was align with last year’s Budget survey where the rising cost of living (87%) was the pre-eminent concern for Malaysians, while 39% was concern about the unaffordable property market.

While money concerns were already weighing heavily on people’s minds, this year we found out the extent of these concerns – among millennials in Malaysia.

“You, youngsters, have it way better than us!” So, says the Baby Boomers and the Generation X-ers. But, financially, it is far from the truth.

Here’s the alarming truth we found from the latest survey about millennials and money:

Millennials are having a tough time surviving financially

Keeping a roof over their heads, the lights on, food in the fridge, a car in the driveway — covering these everyday expenses is Malaysians’ biggest financial concern. With 86% of millennials in Malaysia rate cost of living as their top three biggest concerns, it is undeniable that many are finding it tough to make ends meet.

The survey included the following financial concerns as options displayed randomly, which respondents ranked from least to most challenging:

Though expenses such as food and petrol do not differ much for both age groups and also across income ranges, it becomes a problem when the lower income has to spend close to half of their income on food. This makes it increasingly difficult for this group of people to survive financial because the cost of food is only heading one way – up.

This is in-line with statistics released by the Government, where Malaysians spend 31.2% of their disposable income on food and food away from home; 23.9% on petrol, housing and utilities; and 14.6% on transport.

The findings also point to lack of money management skills among millennials, with the lower income spending 21% to 27% of their income on entertainment. This in turn results in their inability to save money, which is ranked the third biggest financial worry. 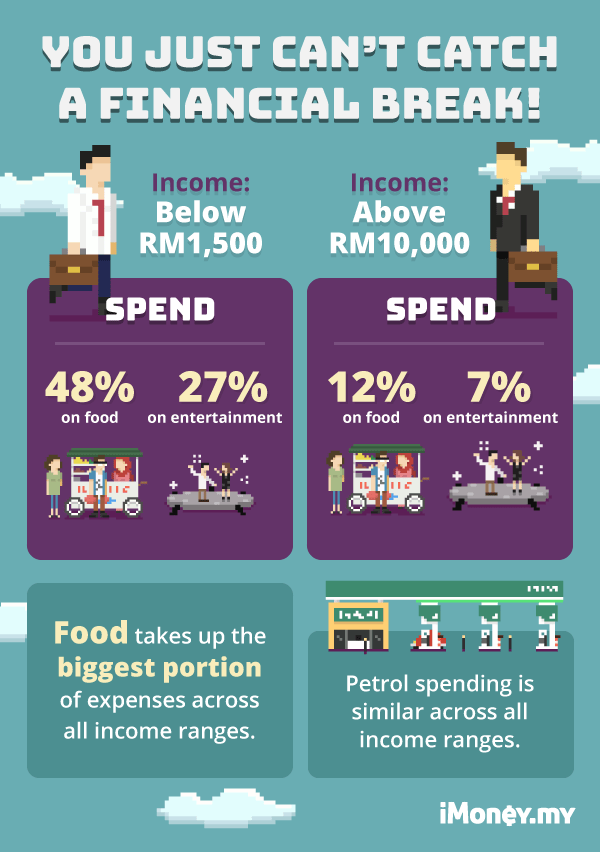 Despite the harsh financial situation they found themselves in, 51% of the respondents still manage to put away money for their golden years. However, 73% of them are still not ready for retirement as Malaysians need to save at least 10% of their income, on top of their compulsory retirement contribution with the Employees Provident Fund (EPF), to achieve two-thirds of their income in their golden years. 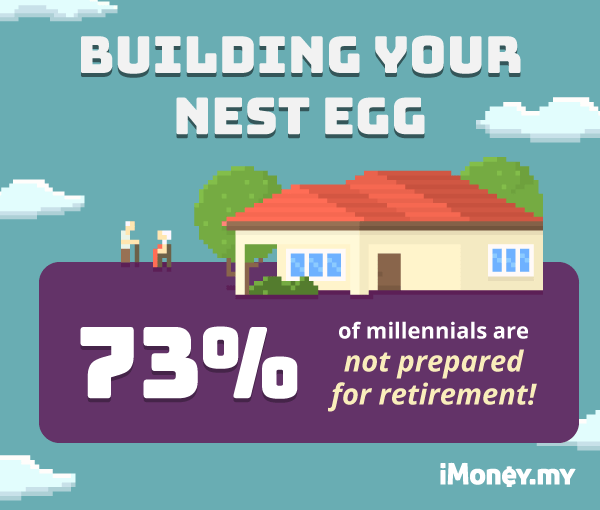 The fight for affordable housing intensifies

Slightly more than a year ago, Khazanah Research Institute (KRI) published a report that said the Malaysia’s housing market was “severely unaffordable” because the median house price is 4.4 times the median annual household.

The millennials’ inability to afford a home is exacerbated with the fact that they are buckling under the high cost of living.

Despite the various cooling measures introduced by the Government, the average house prices continued to increase in 2015, with a slight dip in the last quarter. 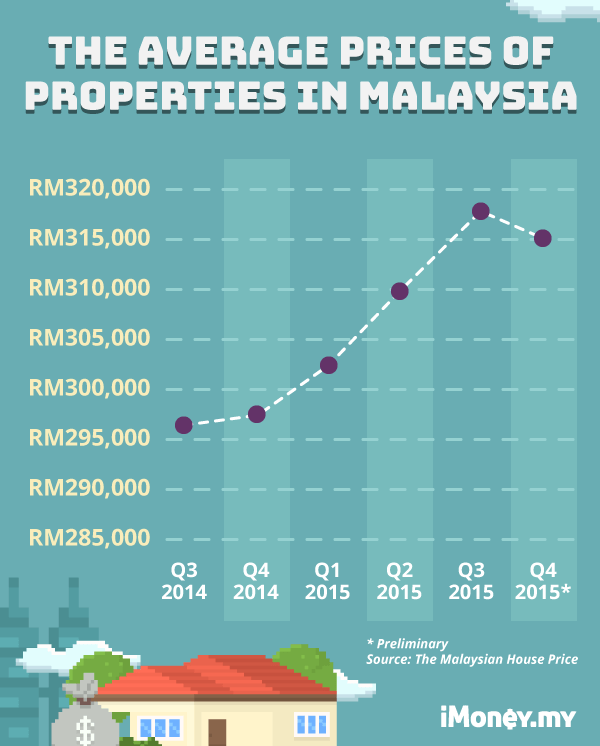 Based on the same report by KRI, Kuala Lumpur, Penang, Terengganu and Sabah have the highest housing affordability rate of 5.1 and above. For example, in 2014, the median all-house price in Kuala Lumpur is RM490,000, while the median monthly household income is RM7,620.

It is hardly surprising for those in the 21 – 29 years old group to find unaffordable housing in the country to be the biggest financial worry for them, while the older Generation Y ranked it as their second biggest concern. 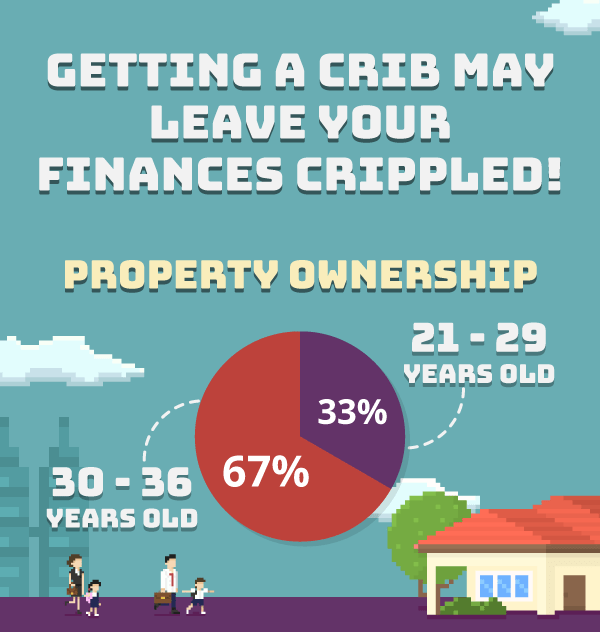 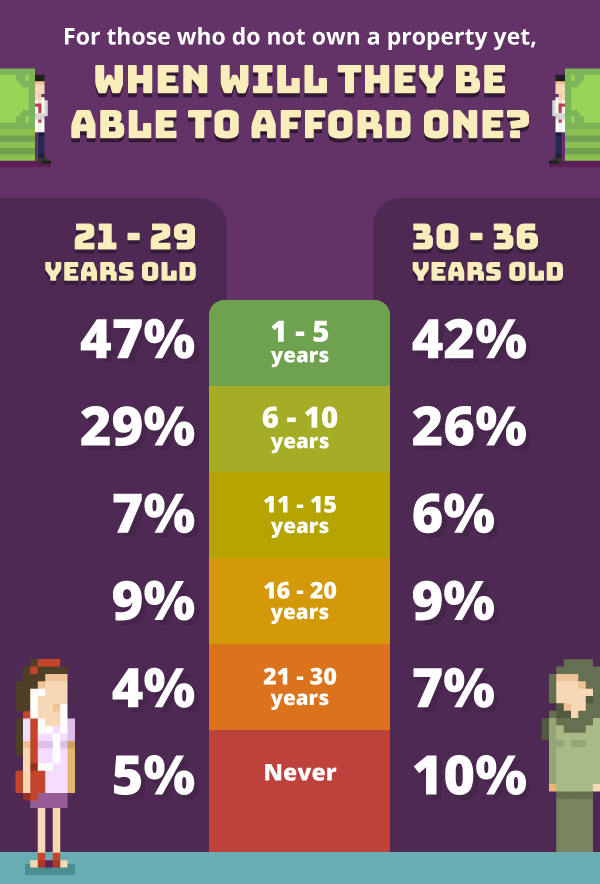 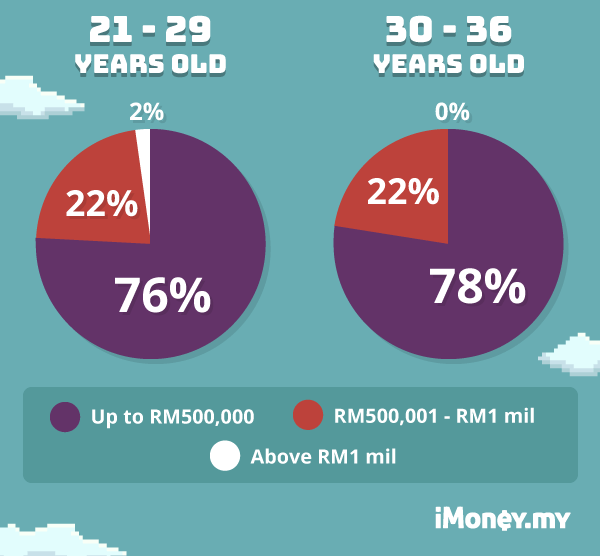 Which brings us to the next point…

Millennials are knee-deep in debt

There are many words to describe millennials and these are just a few that came to mind: YOLO, selfies, and ridiculously high debt.

Malaysia has the third highest car ownership in the world, with 93% of households owning a car, said Nielsen in 2014. It comes as no surprise that close to two-thirds of Malaysian millennials are carrying a car loan. 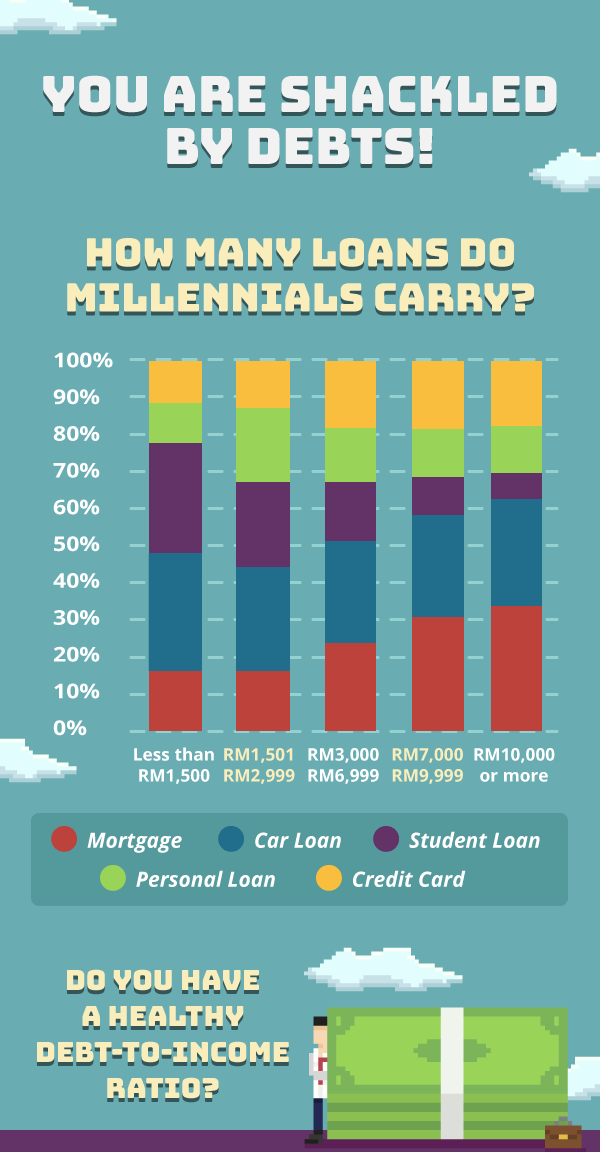 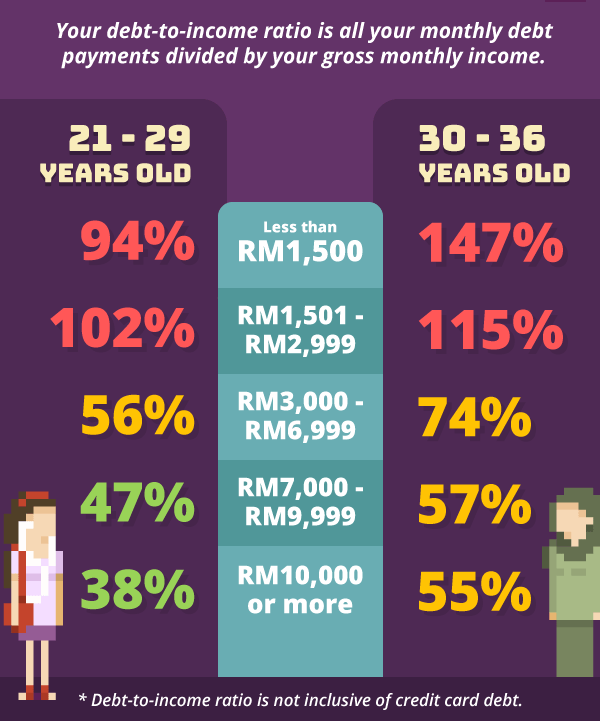 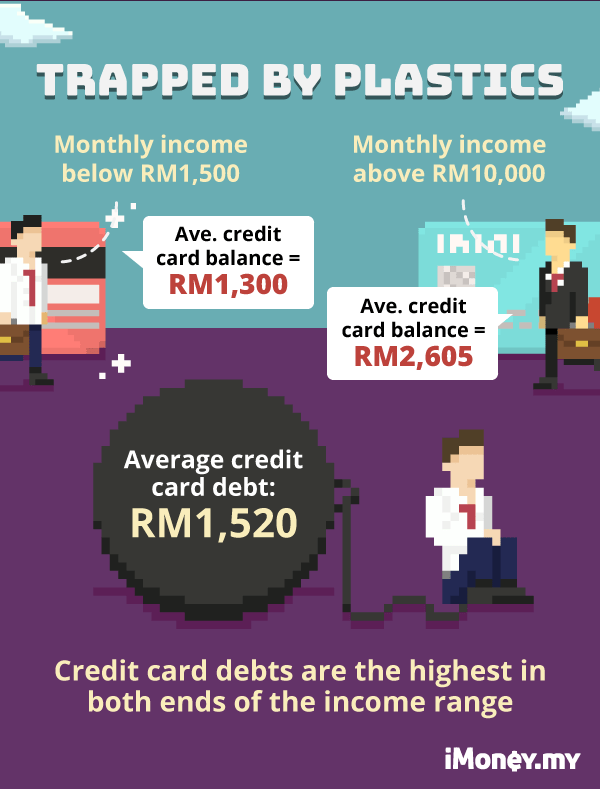 Debt-to-income ratio is your total monthly debt over your gross monthly income. The higher it is, the worse off you’ll be. Those with high debt-to-income ratio may find it impossible to obtain anymore credit facilities from financial institutions, and they also run a higher risk of defaulting on their payments.

If your current debt is more than 60% of your income, any financial emergencies could leave you scrambling. The ideal ratio that banks look for when approving a credit application is below 60%.

The survey found that many millennials are highly leveraged, with the lower income groups having high debt-to-income ratio exceeding 100%. This means their debt repayment exceeds their income. This could easily lead to bankruptcy as these individuals would have no way of servicing their loans.

Our survey also found both credit card debt and mortgage inches up in tandem with our income, but it is alarming that the younger group of millennials with the lowest income (below RM1,500) has an average credit card debt that’s higher than their income, at  RM1,850.00!

The financial predicament that we are in

When it comes to recession, many Malaysians feel like the country is already in one. The common sentiment among millennials is, we are in or headed for recession. A whopping 49% thinks that we are already in recession, while another 41% says we will be soon in recession.

However, the truth is, Malaysia is far from recession. A recession is defined as a significant decline in activity across the economy, which go on for more than a few months. Though growth has slowed, Malaysia’s economy has grown in line with market expectations at 4% for the second quarter of 2016, and 4.2% in the first quarter.

However, this did not shake the perception of recession among Malaysians. Hardly surprising, with the financial hardship that most millennials are going through, many of them have to sacrifice major financial decisions just to survive in today’s economic climate.

As finances stretched thin, many millennials find themselves postponing some financial decisions, with 69% of the respondents said they have postponed or cancelled plans for vacations overseas, and 65% delayed buying a home.

Other decisions that are brushed aside are buying a car (41%), furthering your studies (37%), and getting married (30%).

To many, their financially quandary is a culmination of a few factors: 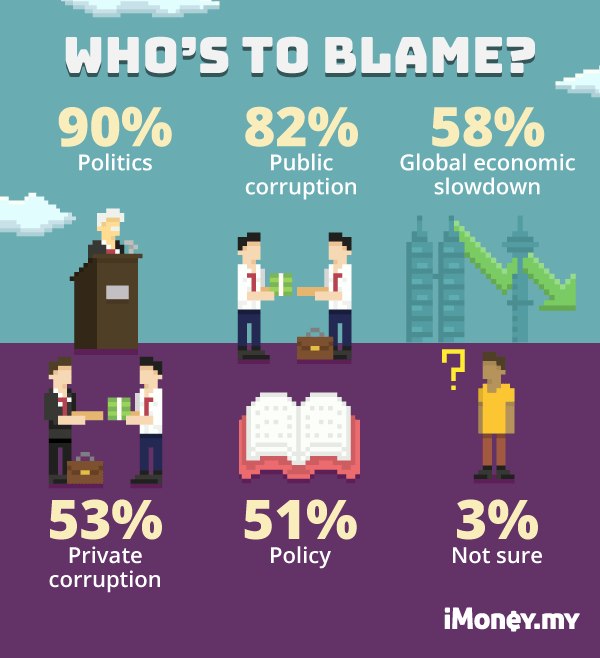 Though these factors may be at play, there are also many other factors within our control that can help millennials out of their financial predicament. For example, a better management of their spending, debts and savings, could go a long way in helping them to not just survive, but thrive, even in bad times.

The upcoming Budget 2017 is expected to cover a few measures to help the bottom 40% household income group (B40) and middle 40% income bracket (M40) to deal with the high cost of living and purchasing their first home.

Though confirmed by Minister of Finance II Datuk Johari Abdul Ghani that 1Malaysia People’s Aid (BR1M) will be continued, any change to the quantum of the financial aid is not revealed. However, based on our survey last year, 95% of the BR1M recipients said that the aid was not enough to help them cope with the cost of living.

Hopefully, the national budget to be announced later this month should pull some new tricks out of its hat to really make significant strides in elevating the income of the B40, and solving the issue of affordable housing.

The Edge Millennial Survey covers the urban dwellers with 75% of the respondents residing in the Klang Valley. Here is the breakdown of the demographics: 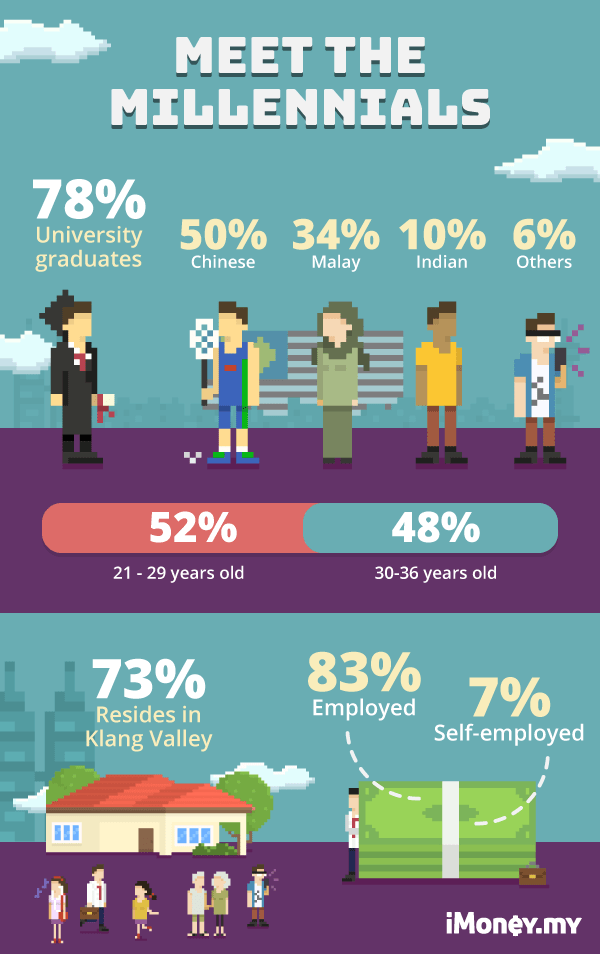 The information and/or data from the The Edge Millennial Survey 2016 may only be rebroadcasted or republished with full and proper credit and attribution to “iMoney Malaysia & The Edge” This survey was conducted between September 26 and October 6, with a sample of more than 1,200 Malaysians.