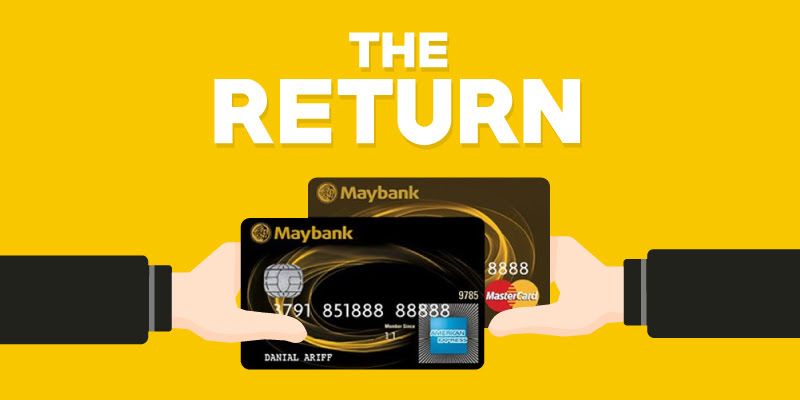 The Return Of The King: Maybank 2 Cards

In 2015, Maybank pulled the carpet under our feet by removing the 5% weekend cashback for all retail spend on the American Express card of the Maybank 2 Cards, and restricted it to only weekend dining. We were heartbroken to say the least.

Maybank 2 Cards hailed as the king of all cards before the change last year. To put you up to speed, we could *almost* rule the world with the Maybank 2 Cards with these perks:

Sounds good? However, on August 2015, Maybank switched up the perks to restrict it to only weekend dining cashback at 5%, and still capped at RM50 per month per customer.

To add salt to our wound, less than a year later, the TreatPoints benefit was also revised. On April 2016, instead of earning 5x TreatPoints for every RM1 retail spend on the American Express card, we could only earn up to 1x TreatPoint for most of the categories. Think about all the TreatPoints you were not getting when you spend hundreds on petrol every month! Previously, you would have gotten 1,500 TreatPoints for every RM300 spent on petrol, and with this change, it was reduced to 300 TreatPoints.

The return of the king

After spending more than a year reminiscing the good ol’ days, Maybank finally has some good news for us on the Maybank credit card rewards.

Text message from Maybank informing cardholders of the great news.

As of March 15, 2017, Maybank 2 Cards Gold and Platinum cardholders will once again be able to enjoy 5% cashback on all retail spend on weekends using their American Express card. It is no longer limited to dining spend anymore. This is still capped at RM50 per month.

For the points addict, you are not disappointed with the new update too. All petrol spend will be rewarded with 5x TreatPoints for each RM1 spent. Great news for Maybank 2 Cards cardholders. You are now in possession of the king of credit cards again.

Here’s the new list of perks for Maybank 2 Cards:

For more information on the benefits, please visit Maybank.

Get 5% cashback on all your local and overseas weekend spending!

Up to 5x TreatPoints for every RM1 spent daily, including petrol
Apply Now

Now it’s much easier for you to max out your 5% weekend cashback of RM50 a month because you can spend RM1,000 in any categories in order to get the maximum cashback.

That can be easily achieved if your spending is as follows:

The 5x TreatPoints for petrol spending will be limited to a maximum of RM500 per month though. That is a reasonable cap for the usual city driver.

If you spend RM250 a month on petrol, you will get 1,250 TreatPoints per month. That’s 15,000 per year. As TreatPoints expire in three years, you can easily accumulate at least 45,000 TreatPoints in that period on petrol alone!

But… there’s a catch

However, there is one tiny detail that many may miss. The previously low interest rate of 8.88% per annum has now been increased to 15% per annum. It’s fine if you are the type who pay off your balance every month.

However, if you are the minimum-payment type of cardholder, you may want to be careful as the difference in the interest rate could mean a lot.

That’s RM3,903 more in interest and it will take one more year for you to clear your debt.

The reinstatement of the perks spells great news for Maybank 2 Cards cardholder, and it does make the cards one of the best credit cards in the market.

One of the best things about the Maybank 2 Cards is that it rewards you with both reward points and cashback, and there aren’t that many credit cards that offer both perks.

Get your hands on the Maybank 2 Cards now!