How Location Can Make Or Break Your Property

Property is still on our minds. According to the Real Estate and Housing Developers’ Association Malaysia (Rehda), more than half of Malaysians surveyed still expressed a desire to own a home.

In a poll of 1,655 respondents, the association said 56% were looking to own a home, primarily within the KLCC area and the Kuala Lumpur city centre.

This is unsurprising, given that in the purchase of a home, location reigns supreme. A separate survey, this time by portal PropertyGuru, revealed that Malaysians seeking to land their first home consider safety and property size above price, but location remains the most important criterion.

In its Malaysia Property Market Sentiment Survey, 98% of the 1,013 respondents polled said location matters followed by security and safety of the property location (84%) and property size (73%). These three emerged top from a list of 18 factors.

So if you are on the hunt for your first property, here’s why you should not give up on landing a home that’s strategically located, and let’s take Sentul as our case study.

Appreciation is in your favour

Let’s put this out there first: as an investor and first-time homebuyer, it is almost impossible for you to know the details of all property price movements.

That said, you can still make some calculated guesses with publicly available data and trends.

So, Sentul is located in the northern region of Kuala Lumpur but the capital is known for expensive properties and high yield.

Based on figures from the Valuation and Property Services Department, Kuala Lumpur and Selangor were among the six states that charted a high annual price increase of 5.1% and 7.5%, respectively.

The most expensive housing in Malaysia can be found in Kuala Lumpur, with house price averaging RM772,126 in Q3 2016.

If you are looking at a condominium for your first home, here are the price trends for high-rise units in the capital over the last 24 months:

And you can really get granular with this. For example, using information from annual Housing Price Index, potential buyers can obtain data by region. 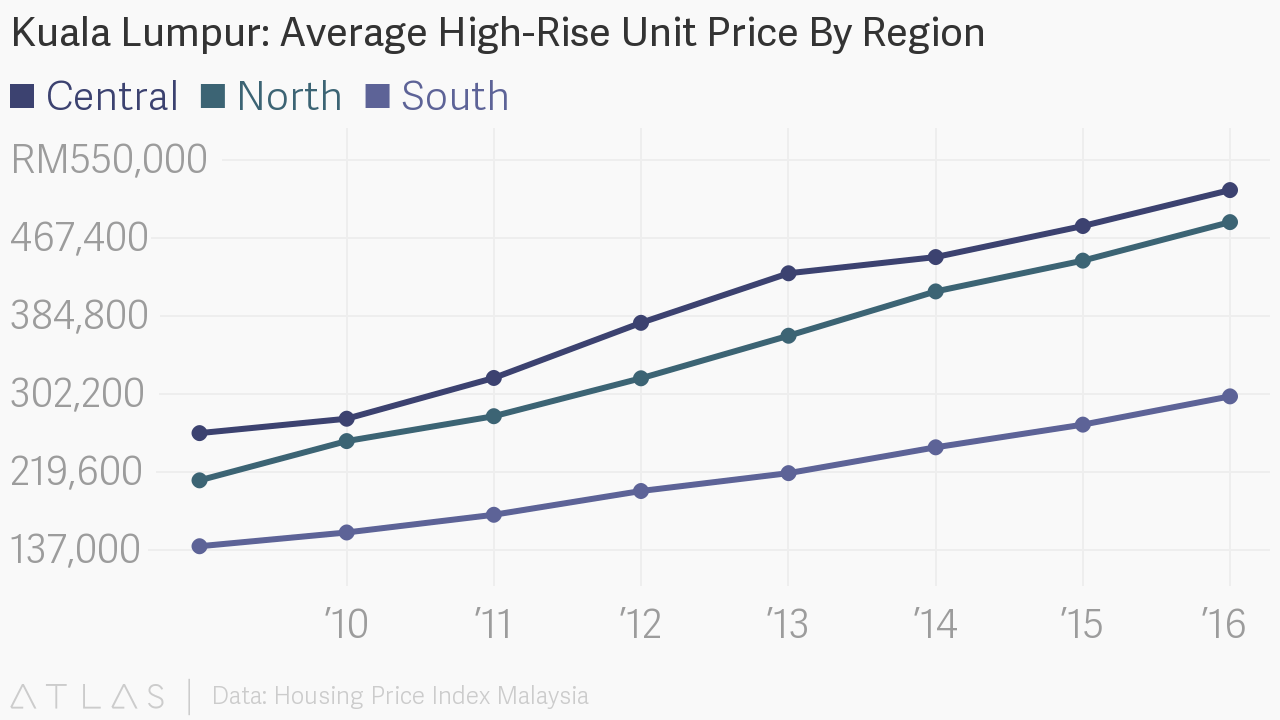 But the good news is wherever you are in the capital, property prices are seeing an uptrend. When it comes to the hottest addresses, central Kuala Lumpur is the place to be. But since the average price is RM518,145, it may be a tad steep for the average Malaysian.

If so, then your best option is the northern region of Kuala Lumpur – which encompasses areas such as Sentul, among others – where house prices are going for an average of RM484,218.

You can also definitely consider the southern part of Kuala Lumpur – such as the districts of Petaling and Cheras – if you are looking for something easier on the pocket.

The northern region is experiencing a property boom

The northern zone, of which Sentul is part of, is defined by the boundary of Kuala Lumpur which separates Kuala Lumpur from the town of Batu Caves, Selangor.

Also nearby are industrial areas and estates. In fact, City Hall classifies Sentul as one of the “stable areas” in the city where major development in the zone shall be focused on the completion of the development programme for the proposed large-scale commercial and residential centre in Sentul Raya.

Be mindful of amenities and accessibility

Sentul is only about 5km to the city centre via the Duke highway. It’s nearby established neighbourhoods such as Setapak, Mont Kiara, Hartamas and Jalan Ipoh.

This means high rental yields. According to a study by US-based apartment search portal Rentcafe, Kuala Lumpur is the most affordable city for renters in the world.

It said those renting apartments in the capital need only spend about 20% of their income on rent.

Also, the Real Estate and Housing Developers’ Association of Malaysia (Rehda), believes strata residential properties are on the rise.

Based on the findings of its Property Industry Survey (PIS) for 1H17, residential properties continue to lead new launches with 53% of them comprising strata units.

A strategic high-rise unit is also located within walking distance or a short drive to shopping malls, international schools, hospitals and even major highways.

Interestingly, a study by Universiti Kebangsaan Malaysia found that 70% of young people chose to live in an urban area citing closer proximity to their office and amenities typical of urban location.

So naturally these positive factors can help translate into better rental yields for a homeowner.

In comparing the northern and southern region of Kuala Lumpur, one will find that it’s the former that’s currently better equipped in terms of accessibility and amenities.

Always aim for a lifestyle hub

These days it’s normal for developers to offer not only a home but a community where everything can be found either a short walk or drive away.

If you are looking at Sentul, there’s the famous Kuala Lumpur Performing Arts Centre (KLPAC), a port of call for youths and Malaysians interested in the arts scene.

Malaysia is also known as a smorgasbord of flavours and Sentul is known for its offering of local cuisine and delights, from the institutional banana leaf rice to Chinese food along Jalan Ipoh.

Families can also take respite from the hustle and bustle of the city at Sentul Park, a 35-acre private gated community park just off Jalan Ipoh. Although access to much of the park is restricted to residents of adjacent condominium blocks, the public is allowed to enter parts of the park where KLPAC is located.

In fact that’s one of the selling points of Sentul: it’s an area fashioned by big-name developers such as YTL who was also responsible for building up Sentul Park and its surrounding areas.

Also the recently launched River of Life project is a sign of confidence that the capital is not left behind when it comes to creating a sustainable living environment. The project, launched by Prime Minister Datuk Seri Najib Razak, is situated around the convergence point of the Klang and Gombak rivers.

Its focus is to increase the liveability index of the city, to ensure Kuala Lumpur would be on par with other world-class cities.

Stakeholders have also praised the effort, saying that value of properties in the area would increase, adding that there would be more activities around the river that would attract more tourism to the city.

Erick Kho of the Malaysian Institute of Estate Agents rightly said if the river were dead, real estate around it would also die.

And it has to be serviced by public transport

Last year, the Finance Ministry revealed that by and large, Malaysians spend 23.9% of their disposable income on petrol, housing and utilities, as well as 14.6% on transport.

To top it off, a car is now considered part of the basket of necessary goods which includes mobile phones, computers and Internet access.

Let’s say you are staying in Sentul and working in Semantan. Here’s a breakdown of your monthly travel expenditure:

So, just by relying on public transport, you could potentially save RM6,864 a year.

Again, between the northern and southern corridor of the capital, you’ll get a better chance of being service by public transport in the former as opposed to the latter.

Speaking of LRT stations, there’s the spellbinding MRT2 station, also known as Sentul West, which will service the area. It is part of the stations along the Klang Valley Mass Rapid Transit Sungai Buloh-Serdang-Putrajaya Line. The station is located at Jalan Ipoh between Viva Residency and the prestigious KL Performing Arts Centre (KLPAC).

Ultimately, think for the long term

Buying a home is a life-long investment and owning one brings with it a fair share of responsibilities.

Always take time to consider your lifestyle and finances before committing to one. Thorough research, background checks on the property developer and even polling friends and family with prior home-buying experience can add to an enriching experience while you are out on a property hunt.

If you are on the lookout for one, consider SkyMeridien @ Sentul. Developed by SkyWorld Development Group, these residential towers consists of 780 units with living spaces ranging from 581 sqft to 1,318 sqft.

The property is located within walking distance of the Sentul Timur LRT station and is roughly five minutes’ drive to other nearby public transportation hubs. It’s also near major highways as well as lifestyle hubs such as Taman Tasik Titiwangsa and the KLCC shopping mall. 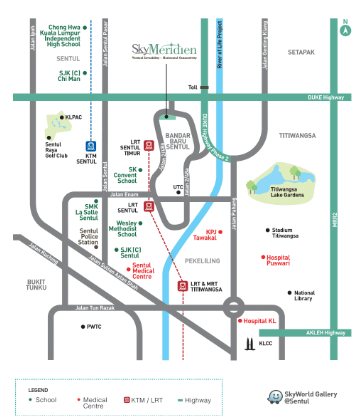