Father’s Day Special: “My Financial Life Changed When I Became A Father!”

For first-time fathers especially, having a baby means big changes in money management. However, this can often be forgotten, of swept aside in the midst of the excitement and worries that come with expecting a child.

Most parents would get lost amid shopping for a crib and a stroller, and forget to have a frank discussion about how becoming a parent will change their financial life. New fathers have a massive amount of things to consider, and sometimes it becomes so overwhelming that they tune things out.

As a Father’s Day exclusive, here we talk to the fathers in iMoney, on how they financially deal with the arrival of their bundle of joy.

While most fathers would look for better paying career opportunities, Rossnan Cheong did quite the opposite. He moved from a cushy corporate job to a start-up company that paid him less. However, he believes all that was made possible because he had planned his investments ahead of time using the savings from his previous job. The more flexible hours was something that he saw as being more important than anything else.

Cheong and his wife started planning on the financial needs of their child when they found out that they were expecting. He knew that he had to set aside funds for the delivery and the regular doctor’s visits. They started to do a lot more bulk grocery shopping in order to cook more often. Generally, luxuries were cut down and they went out a lot less often than before.

“You’d be surprised at how much you can save by just staying home”, chuckled Cheong. “Even my wife’s fashion budget has been put on hold for quite some time now.”

Adjustments included setting aside more into investments like Amanah Saham Bumiputera (ASB) and moving up property investing plans. Cheong had also made a property purchase early on and they suffered quite severely since they had a lot more money being set aside for these things. However, he knew it will pay off. These decisions were not just so they had money when the baby was born but for longer term plans.

When their little one was finally born, the first thing that he did was to invest a medical insurance plan worth RM200,000 for her. They were already covered with insurance and they made sure that their daughter was also covered. That’s primarily health coverage for her in case she’s hospitalised or anything.

When speaking on his daughter’s future education needs, Cheong understands that it can cost a bomb when his daughter goes to college. He now has primarily set aside his ASB investments, followed by the properties that they own for this purpose. He expects that they’ll be financially secured enough to comfortably send his kid to university overseas by the time she turns 18.

Every big financial decision is made with the need of his daughter in mind. They decided to stay in the house he had originally bought for investment because of the space. They also recently sold both their cars because they were too small and bought one bigger one. It’s a practical decision as they often travel as a family anyway. Ross believes there’s always Uber or MyTeksi otherwise, which still costs less if you’re not actively using your second car.

Their monthly budget saw only a slight increase since they stopped their other unnecessary expenses but baby-related stuff comes up to between RM400-RM800 per month. They mainly spend on diapers, doctor visits and medicine as well as baby food. Then there are occasional larger expenses like play pens, mats, clothes and toys but those are made with gaps in between to spread out the damage.

When asked what financial advice he would give his daughter, this was what he said “Things cost money! I think that’s something that maybe I didn’t quite grasp when I was young.  The most important lesson for her to understand is the value of money. From there we can work on getting her to understand how we must always have more than one way to make money. Maybe I’ll teach her to sell lemonade on credit and collect interest!”

Quick Tips For Expecting Fathers
“Prepare early! Get your investments in order before you’re close to getting a kid or even getting married. It’ll make your life easier. Also, be prepared to make a lot of sacrifices on your entertainment. It’ll pay off in dividends later on!” – Rossnan Cheong

See this: With GST, will parents with school-going kids be further burdened financially? 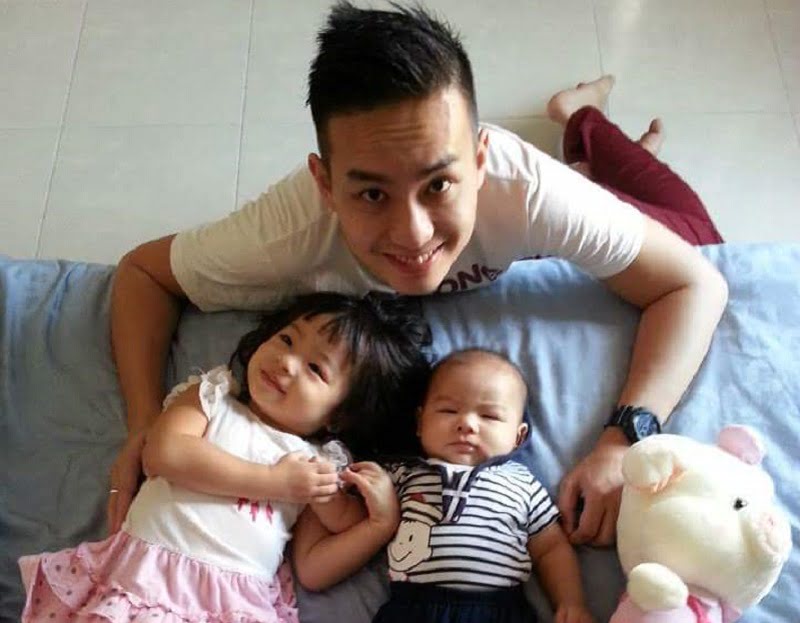 Ian Leong strongly believes that financial planning is the foundation of any successful family planning. Before trying to start a family, the couple need to be mentally prepared to save up and sacrifice to make adjustments on their lifestyle and spending. Both are equally important and must go together concurrently.

When Leong first found out that his wife was expecting their first child, he first invested in a property and bought an education plan. He recognises that providing his kid with the best education is the best legacy he can leave behind.

Unlike most first time fathers, Leong didn’t switch jobs or look for other career opportunities with the arrival of his child. His job, when he was expecting his first child, provided sufficient financial security he needed. He saw his monthly expenses spiked up by about 50% primarily for milk, diapers, and nanny’s fee.

“These additional costs can kill you if you aren’t prepared for it,” Leong said.

However, he has invested in healthcare insurance for his kid worth RM100,000. They have also cut down on various unnecessary expenses to contribute more towards savings and other investments. Whenever he and his wife need to make big financial changes, the needs of the kid comes first above everything else.

Now a father of two, Leong’s financial advice for his kids is, “Work hard on your own. Don’t think of inheriting anything from your parents. By the time of inheritance, the amount of money they get is probably worthless”.

Quick Tips For Expecting Fathers
“Buy a property before your kids arrive. As soon as you start thinking about having a baby, start a baby fund.” – Ian Leong

Read this: Bringing up a child can cost a bomb. But there are smart parenting lifehacks to cut your family expenses!

Harry Antarakis, a father of two beautiful children, truly believed in investing in a property first before having kids.

When he first found out that he and his wife were expecting, he started investing in better insurance policies and setting aside money for their future education purposes. Education doesn’t come for cheap, he reckoned. Once his first child was born, his first financial move was to get insurance coverage, especially on healthcare insurance.

“A child is an incredible responsibility, and a bit of planning goes a long way,” advised Antarakis.

Having kids is a life-changing experience, says Antarakis. He started investing more time with his kids and reduced his outings, like watching movies at the cinema and eating out.

“It was an automatic change,” he said. “The changes that accompany adding a new little member to your family can be stressful, but you can reduce the stress greatly by minimising the financial factor.”

With the arrival of his child, Antarakis looked for better career opportunities that paid him more, so he can provide financially for his kids, and also allow him to invest more in his kids’ education, like sending them to the best private school. Private education costs him approximately RM40,000 a year. He also needed to get a bigger car to fit the stroller!

Antarakis’ financial advice for his kids is that they should study well, because that will enable them to secure a job with good prospects.

Quick Tips For Expecting Fathers
“Save some money in advance. It will be very useful in taking of the added and ad-hoc expenses that come along with having kids.” – Harry Antarakis

In short, becoming a father has an enormous impact on any family’s finances, including the goals, priorities and lifestyle. Many first-time fathers can be petrified when they see the numbers – it’s huge and there can be various unexpected outcomes.

Like everything in life, preparation is key. So before you start picking out the room colour and planning your baby shower, it may be valuable to start making the necessary adjustments in your financial life before bringing home a baby. Early planning certainly will decrease your financial woes, stress and anxiety. You can then sit back and enjoy the new addition to your family.

How about you? As fathers and father-to-be how have you changed your finances?

Parenthood doesn’t come for cheap. With 6% GST, you can expect your costs to escalate further.