Dr Mahathir Mohamad: Reforming Spending From The Top Down (Part 2)

During his leadership, he implemented economy policies that put Malaysia on the map but he was also criticised for his industrial drive and handling of political dissenters.

In a lengthy interview with iMoney, he weighed in on the various problems currently faced by the country and his desire for economic reform, even at 91 years old.

In Part 1, he discussed his spending habits and the state of the ringgit while giving advice on entrepreneurship and investment, among others.

Here, in the second and final part of this exclusive interview, Dr Mahathir speaks to iMoney’s writer, Emmanuel Surendra, on the current state of the country’s education, the economic crisis, and his political future.

In your ministerial portfolio, you oversaw education from 1974 to 1977. Our public universities have not been ranking well, forcing many to seek private education which is getting costlier every year. Your thoughts?

Well, the government has a duty here to provide some support, be it scholarship, subsidised education, or other means to help people acquire knowledge.

I believe that currently they are cutting back on their allocation of funds for the higher education ministry even though they have a good budget. But those are just figures as the funds are not available.

So, on one hand, we need more funds for education; on the other hand, we need to study the contents of our education curriculum and find out what is best to suit current needs.

Current needs, of course, are more on science and technology, which I had changed the teaching of science and maths into English but they reverted to Malay.

I think we are going to have poorly educated people who either may not find jobs or find low-paying ones.

So, what can Malaysian parents do to cope?

It is always a question of money. See, I noticed a lot of Malays, though still not enough, were getting scholarships, while a lot of Chinese studied abroad or at private higher educational institutions because their parents were rich enough to pay.

For that purpose, I introduced the twinning arrangement where a local higher education institute twins with a foreign university. They do the first two years in the country, costing them much less, and the final year abroad.

That has helped a lot of families who are not exactly poor but can’t afford to send their children to foreign universities or even to private local universities.

It’s these options, which have enabled a lot of people to get better education for their children that parents can explore.

But, of course, we still need to bring down the cost of education.

So, with all that’s going on, are Malaysians better off today than under your leadership, financially of course?

I don’t think they are better off. For one, the cost of living has gone up.

The sales tax affects only the person who buys. If he doesn’t buy, he doesn’t pay. But the GST affects everybody, whether you buy or don’t buy, just because you live, you have to pay tax, the poor has to pay tax.

So, people are not enjoying life today, and purchasing power is a lot less. The devaluation causes the decrease in purchasing power and at the same time with the devalued money you have, you have to pay a higher price for the things you want to buy, simply because those people have to pay tax and naturally the price of whatever they produce rises.

In an opinion piece on East Asia Forum, Dan Slater of the University of Chicago said the road toward economic ruin commenced with you, and not with the current PM, that you didn’t pull Malaysia out of its crisis with economic reform or adjustment, but with more borrowing and spending. What do you have to say?

It is because of the changes, the changes in policy. They wanted to make their own legacy and they changed the policy… 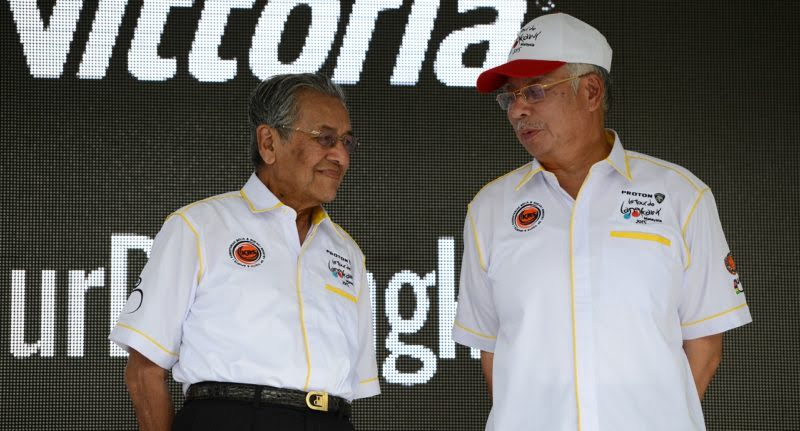 Both Abdullah and Najib. Najib worst of all because his belief is that cash is king.

So, you never borrowed…

None of these things happened [during my time]. Those who say this was due to me, please show when did I borrow money.

I borrowed money from the Japanese because their offer was at 0.7% rate of interest, repayable over 40 years. It’s almost like free money. If you didn’t borrow, then you are stupid. So, I borrowed.

But, otherwise, they can see my record of borrowing. Very little. Even during the currency crisis, we did try to borrow but failed, but it doesn’t matter because Malaysia has got huge savings, one of the biggest.

About 40% of the GDP is saved every year in the form of the force savings where people can put their money and take it out when they want, perhaps KWSP (Employees Provident Fund), Socso, for injuries, the pilgrim’s fund (Lembaga Tabung Haji), or PNB (Permodalan Nasional Berhad), the government-run unit trust.

So, there was huge savings in Malaysia, which is unusual for any developing country or developed country. Because of that, we had financial strength. It was a matter of mobilising the finances.

Unfortunately, during Najib’s period, what he did was he monetised the wealth and created things like the FGV or Felda Global Ventures, for example. He valued the wealth and sold it as shares in the market, took the money and invested it in non-profitable things.

The same thing happened with KWSP, the biggest single fund that we have running up to US$200 billion, and KWAP, which is a pension fund for the government.

And Tabung Haji, the pilgrims’ fund. 1MDB had bought government land at below market price, at RM64/sqft, when its surrounding area was sold at RM7,000/sqft. Then, it subsequently sold the land to Tabung Haji for RM RM2,773 /sqft.

Was that what I was doing? If they say this is because of me… what I was, of course, doing was to enrich the country and my successors robbed it.

Let’s say the opposition wins the next general election, what would you like to see changed? Do you think the NEP should be revived?

The NEP has, to a certain extent, served its purpose. But it needs to be reviewed.

There are certain things that do not require much support for the Bumiputeras, but certain areas still need that support.

For example, if you give a contract to a Chinese entrepreneur, to carry out his contract, he depends upon the support of small industries all run by Chinese, simply because there are no Malays around.

If you don’t give government contracts, then the Malays will never get the contract from the Chinese.

Can you imagine, a Malay company competes against five Chinese companies, which are very solid, very experienced companies for a contract? You can’t blame them for giving it to the Chinese company.

But the government can discriminate in favour. This is what affirmative action is all about. To correct the imbalance, you have to do something that is not balanced. 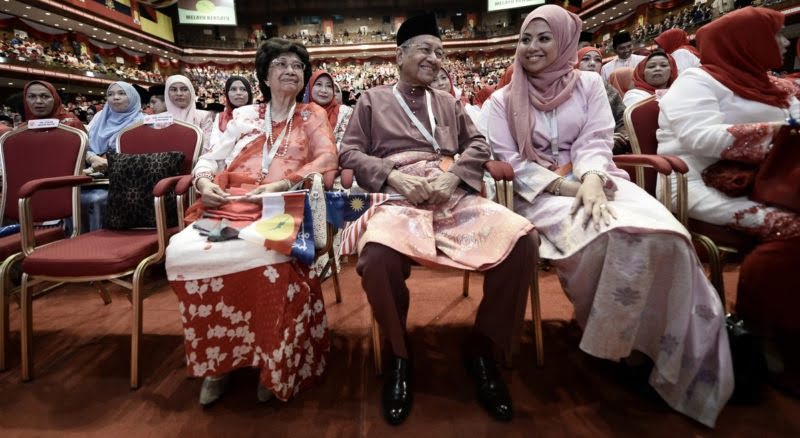 But wouldn’t the New Economic Model (NEM) be a better alternative as it is needs-based and more attractive to investors?

I think this country has always been very attractive to investors. During my time, you can see factories all over the country.

Now, because of corruption, because of instances where the government gives contracts or favour or demand that certain shares be giving to so and so and all that, the amount of FDI has come down.

But, what happens now is, they define FDI as foreign capital coming in to buy land and property and to develop that land.

They are not bringing in any expertise because our own people have the capacity and they are just making money here to take home.

In some cases, of course, they don’t even use local labour. They use foreign labour. So what benefit is that to the government?

One particular case I would like to mention is that there is a scheme to sell houses developed by foreign companies, where if people buy property in another country, they get a free gift in Malaysia, in the form of a house.

So, what does this mean? This means there are no monetary transactions, no profits are made in Malaysia, nobody gets jobs in Malaysia… the government doesn’t get any tax out of this because no profit is shown as it is done in other countries and this house is just a free gift.

Any other reforms you’d like to see take place?

The first important thing is to stop corruption. The government must be more transparent. You must respect freedom of the press, freedom of speech and all that.

I have always believed there is no absolute freedom. I mean while you may have the freedom of speech, you can’t go up to a man and curse him in the face and say, “Well, that is my freedom.” You are going to be bashed in the nose by the other man.

So, there must be a limit to the freedom of speech, of expression, and of the press. But the ability to criticise the government is something you must allow and certainly you must not abuse the law.

Today, there is no rule of law in this country. For example, if you report something about the prime minister, you are going to be arrested, questioned and charged in court for terrorism. This has happened.

People say it was all done during my time, show! Yes, there was the ISA (Internal Security Act). If you’d like to see, there is one recording by the former police chief, he pointed out that I had to accept his advice on security. So it was his decision, not mine.

There is no rule of law in this country. It has become almost a police state.

Recently Datuk Seri Nazri Aziz in an interview with The Star said that at 91, you should be spending time with your grandchildren, rather than fighting. What do you say?

I don’t think I would be doing that if everything is fine in the country. I have a responsibility. You know what happened? When I retired, groups of people came to see me and they are not happy with the running of the country. They kept begging me to do something about it.

I tried to convey this to the prime minister. He didn’t respond in any way. Yes, I advised the PM, but he keeps on doing things which to me are not acceptable, and one day he told me that cash is king…

I rejected that entirely because cash is king means that corruption is okay and I cannot subscribe to that. And people kept on telling me to do something, so that’s why I am involved.

It’s not because of me alone. Of course, I am unhappy with what is happening. I am not happy and I would like to do something about it. I have to respond to do that.

What’s next on the agenda?

I am trying to reverse the process and help turnaround this country by changing its leadership.

If you’ve missed Part 1 of the interview, read it here to find out what Dr Mahathir’s thoughts are on the weakening ringgit.