The much anticipated Budget 2015 was recently tabled by our Prime Minister, Datuk Seri Najib Tun Razak with various new schemes, initiatives and opportunities for the people at large. This was in line with the budget’s theme of “Budget 2015: The People’s Budget”.

Prior to the budget, most wished that the Government will introduce various measures to address higher cost of living and soaring property prices with higher BR1M, lower income taxes, affordable housing initiatives, and larger Goods and Services Tax (GST) exemptions. Listening to the voices of the rakyat, Budget 2015 unveiled last Friday did cover most of the wishes.

Looking at the allocations in Budget 2015, following are the winners that have gained the best advantages out of Budget 2015:

It can clearly be seen that 2015 will certainly be a year of entrepreneurs as the Government has allocated a larger portion of the budget, with a string of programmes to boost both bumiputera and non-bumiputera entrepreneurship in Malaysia. This will certainly help create better opportunities for individuals to be self-employed, encourage talent, skills and creativity, as well as elevate Malaysian products and services to a more global entrepreneurship level. In line with this, the Government has various initiatives to encourage start-ups, conducting more research and development via high technology, ICT and knowledge-based industries and enhancing use of new technology, automation and innovation. 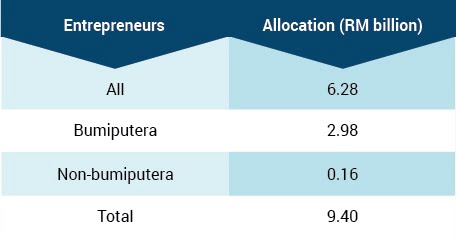 Other benefits for entrepreneurs include: The Government recognises the positive impact entrepreneurship has on the economy, in terms of job creation, being globally competitive, opening new market opportunities, increasing productivity, foreign income generation and poverty alleviation. In line with that, we can see the Government boosting entrepreneurship with a section of the funds allocated to encourage start-ups and further accelerate entrepreneurs and SMEs.

Budget 2015 has also proven to be beneficial for the lower to middle income households as they save on income taxes, able to better afford a home, and reduce the impact GST. With the reduction of tax rates starting from last Budget announced in 2013, this year followed the same trend. Though all taxpayers benefit from the reduction, the biggest saving goes to the higher income group. The higher your income, the higher your tax savings will be. This only applies to their income tax – this group is expected to pay out the most for GST as they would also be consuming in larger volumes.

Here is the tax saving benefit that this group of people gain from the Budget: 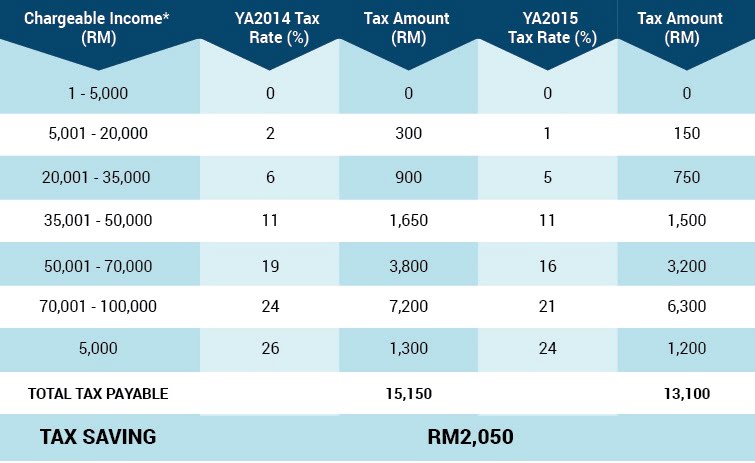 Everyone dreams of owning their own home. However, in recent years, due to soaring property prices, owning a home remains much of a dream for many. Besides that, even saving for the down payment to buy a property has become a huge barrier with the living cost on the rise. This has caused many to move away from the city to buy affordable houses but commute for hours to and fro for work in the city. Recognising the plight of first time home-buyers, the Youth Housing Scheme is set to take-off next year. A day before the budget announcement, The Congress of Unions of Employees in the Public and Civil Services (CUEPACS) voiced out their opinion that the Government needs to raise the salaries of civil servants in the wake of GST implementation next year. CUEPACS’ Deputy President, Zainal Ismail said that their salaries have not been revised since 2007 and is expecting a 30% increase in salary and a bonus of two months in 2015. He also hoped that more civil servants can afford their own homes under the 1Malaysia Civil Servants’ Housing (PP1AM) scheme.

The recently tabulated budget saw some benefits in store for civil servants: As the Government recognises the need for women empowerment and leadership in Malaysia, there are several initiatives outlined to create better opportunities for women: 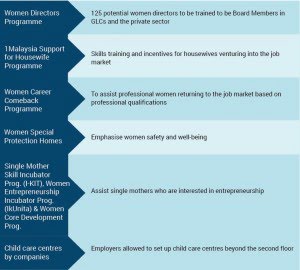 With the increasing cost of living, for many women, working is an economic necessity in order to support their family. The initiatives planned under the budget will allow better job opportunities for women, especially young mothers who would want to return to the workforce after taking sabbatical for one year, not including the three-month paid maternity leave.

Training them to be equipped with the latest skills commonly expected of them, such as the usage of the particular software or system, will better their opportunity to secure a job. Besides, with the increase of women in the workforce, the Government will be on the right track to achieve its high-income target of US$15,000 (RM47,414) per capita by 2020.

With 2015 being the year of GST and possibility of increased revenue, we can hope to see better benefits in Budget 2016 for the people. These excess revenues can be channelled to increase housing affordability with young first-time home buyers with more housing units allocated under the newly introduced Youth Housing Scheme. We also hope to see the Government further target the issue of rising living cost with lower tax brackets, better subsidies, and smaller income disparity. Malaysia had achieved tremendous economic progress throughout the years under various initiatives, and more can and will be done to improve the well-being of the people.

True to Government’s aim of addressing the needs of the people, Budget 2015 was “pro-rakyat” with various measures to manage rising cost of living. Find out who else has significant advantage from the recent budget.