Why Your 2014 Money Resolutions Tanked

As a New Year unfolds, the tradition of making your New Year’s resolutions stares you in the face. For many of us, it is a time to look back and reflect on who we are and what we have done. But more so, it is a time for us to look forward at who we want to be and what we want to accomplish in our lives.

Many of us are great at making resolutions, but are usually not as good at keeping them, especially if they involve money. If your resolutions from last year are still dangling in the air and are nowhere near to being materialised, do not despair – here are some legitimate reasons that could have caused your 2014 money resolutions to tank:

Those hoping to purchase property in 2014 may have a hard time securing property that they can afford. Home ownership has become increasingly difficult for Malaysian homebuyers in recent years due to escalating real estate prices.

Even with the various cooling measures introduced by the Government to correct the property pricing, especially in the urban areas like the Klang Valley, owning a home remains a dream for many.

These days, an apartment in the city centre cost as much as RM676 per square foot, which means that a basic 800-square-foot unit could cost close to RM550,000.

This is compared to a national mean monthly household income of about RM5,000, according to the 2012 findings by the Household Income Survey (HIS).

What this basically means is, homebuyers will now have to pay more to own a home. Here is a comparison of how much you have to pay before and after the OPR hike: A RM76.58 increase per month may not sound like a lot, but the figure adds up to RM918.96 in a year, and RM32,163.6 in 35 years. For the working class, the slightest increment could make a difference between the possibility of owning a home and having to rent one.

Potential homebuyers should always set themselves a step ahead by comparing the best mortgage rates available before making a decision on which loan to apply for.

Property investors who are hoping to make a profit by selling their property this year may encounter some setbacks due to the increase in Real Property Gains Tax (RPGT).

The government believes that hiking up RPGT will curb property speculations, which will in turn stabilise prices in the housing sector. This could spell good news for first-time home buyers as property prices is expected to escalate at a slower pace.

Here is a comparison of how much you have to pay for RPGT in 2013 and now: 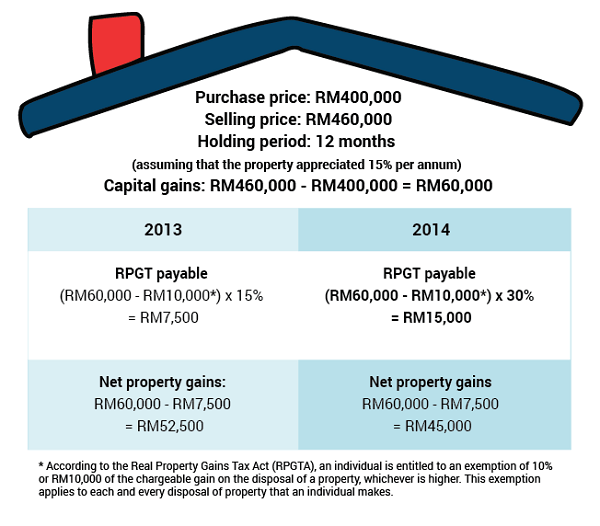 The good news is, individuals can get RPGTexemption on gains made from the disposal on one residential property (this is a once in a lifetime opportunity, so please use it wisely).

Individuals also get RPGT exemption on gains arising from the disposal of property between family members (e.g. husband and wife, parents and children, and grandparents and grandchildren).

Malaysians who made plans to travel abroad this year-end may need to rework their schedules and itineraries, or may even have to change or cancel plans due to the weakening value of the Ringgit.

In December, the Ringgit hit a record low in five-years as emerging Asian currencies lost ground due to plunging crude oil prices.

The declining value of the Ringgit means that Malaysians will now have to fork out more to make up for the higher exchange rates, even in neighbouring countries like Singapore. Due to this, many may have to think twice about travelling in this time of the year or abandon their travel resolutions altogether.

The higher exchange rate automatically increases the cost of your travel plans. Take accommodation for instance, a night’s stay at a budget hotel in Singapore that would have cost you an average rate of S$150 or RM388.50 in 2013, would set you back further at RM400.50 in December 2014.

However, the savvy traveller will be able to leverage on their wanderlust with travel credit cards that offer cash back benefits or free air miles.

For many of us, the advent of a New Year brings about new hope and new opportunities to start afresh. Adequate financial management or engaging a financial planner may be your answer to growing your wealth and finally meeting your financial goals in 2015.