Home › Latest Articles › Investment › What Does The 6.40% EPF Dividend Mean To Your Savings?

What Does The 6.40% EPF Dividend Mean To Your Savings?

Over the weekend, the Employees Provident Fund (EPF) finally announced the dividend rate for 2015 at 6.40%, with a total payout of RM38.24 billion.

Here’s the historical rates of dividend announced by EPF from 2000 to 2015: 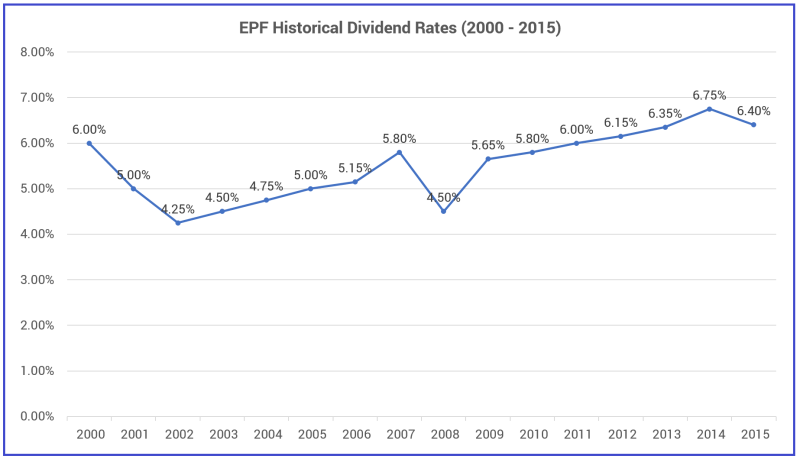 Tan Sri Samsudin Osman, chairman of EPF said, the volatility in the currency markets would make it difficult for EPF to repeat the outperformance in global assets recorded last year.

The rate of 6.40% was considered disappointing by the Malaysian Trades Union Congress (MTUC). Acting president Abdullah Sani Abdul Hamid told The Malaysian Insider, though it was disappointing, it was still better than Tabung Haji’s 5% dividend.

Gopal Kishnam, MTUC’s secretary-general said the union was hoping it would be more or at least similar to last year’s.

However, the announced rate has exceeded expectation amidst global economic slowdown. According to a report by The Heat Malaysia last month, economists have projected that EPF will announce a lower dividend rate of between 4.5% and 5.2% for 2015 due to the weaker investment climate as a result of  slower global and domestic economic growth.

Leading economist and dean of business of Malaysian University of Science and Technology was quoted by The Malaysian Reserve as saying, “Given the current weak climate, a dividend of 4.5% to 5% would be a commendable return.”

Another prominent economist and investment advisor, Prof Dr Hoo Ke Ping said, “There were so many negatives last year. Asset prices fell and most hedge funds had weaker performances. It would likely be the same for EPF.

“A dividend of 4.8% to 5.2% will be considered good. It is important to note that this will be better than what bank deposits offer, which only range around 3%.”

How is EPF dividend calculated?

By understanding how EPF dividend is calculated, you can then make a decision on whether to contribute more to EPF, or use your Account II savings for other higher-yield EPF-approved investments.

Your dividend is divided into two types of calculations – annual compounded dividend and pro-rated monthly dividend. Both of these calculations are on daily rest – which means your dividend will be calculated based on the previous day’s outstanding balance.

Based on the example of a 2015’s EPF statement below, there are three steps to calculating your dividend earned for 2015. 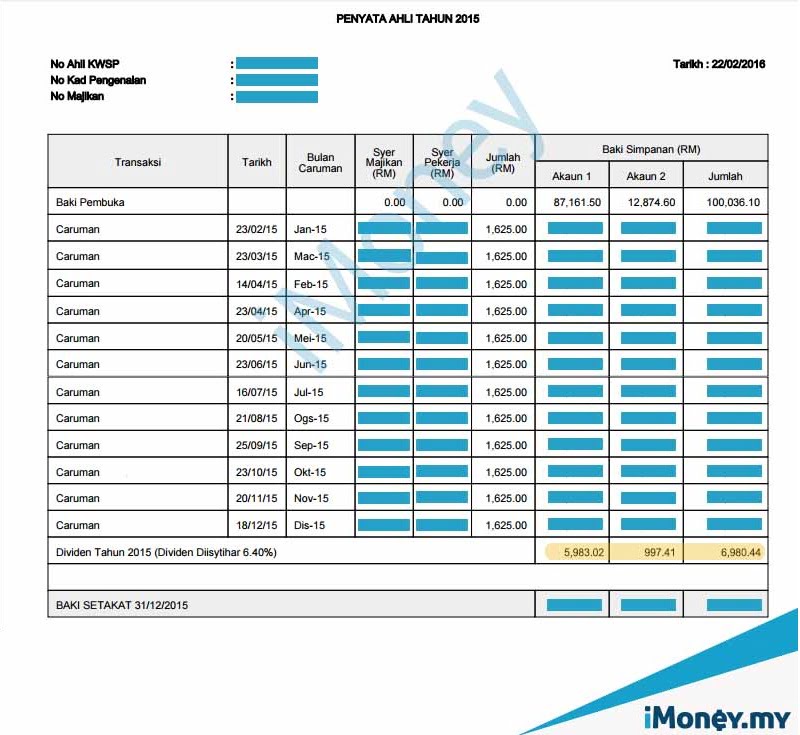 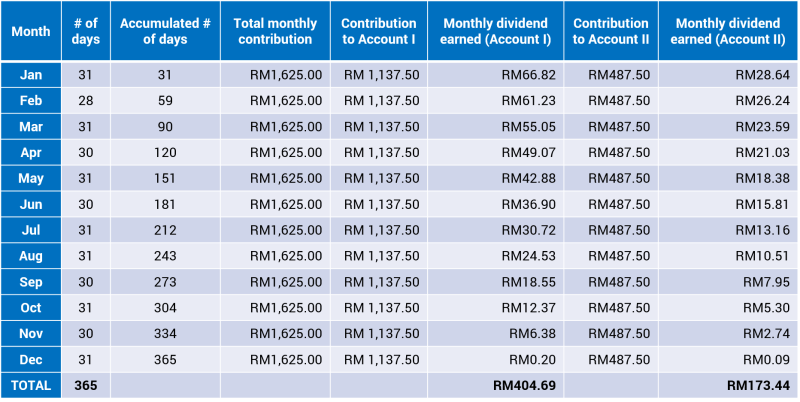 If you were to get the same rate as 2014 at 6.75% per annum, you would have gotten an additional RM381.74 in dividend. However, in today’s volatile and bearish market, there are very few investments that would give you the performance that EPF has with the security of funds that it also provides.

With the minimum rate of 2.5% guaranteed by the Government, EPF poses one of the more secure investments for long-term goals like retirement.

However, if you do feel like the dividend rate is too conservative, EPF allows its members to withdraw a certain amount of money from Account 1 and invest into EPF-approved unit trusts provided the Basic Savings in Account 1 is met.

EPF members can withdraw not more than 20% of their total amount in excess of their Basic Savings in Account 1. For the 2015-2016 list of EPF-approved funds, go here.

One of the top performing EPF-approved funds is Kenanga Growth Fund, and based on its historical performance, here’s how much you can potentially make if you withdraw from your EPF to invest in the fund:

* Qualified as savings exceeds the Basic Savings and minimum limit for investment at RM1,000. # Based on the Bid to Bid Returns (%) published on FundSupermart website. The conservative annualised rate of 8.00% is used for illustration purpose.

However, investing in unit trust funds come with additional fees and charges. The Kenanga Growth Fund charges a 2% initial fee (based on FundSupermart discounted rate) and an annual expense ratio of 1.59%. The Goods and Services Tax (GST) is also charged on these amounts. These charges will eat into your returns, hence instead of 47% returns, it would be lower.

Is that better than leaving your money in EPF? Let’s find out using the historical dividend rates for the past five years:

+ Calculations are simplified for illustration purposes.

As illustrated in the example above, the Kenanga Growth Fund investment based on the conservative historical annualised dividend rate of 8.00% still outperformed the historical dividend rates of EPF. However, leaving your money in your EPF account would involve less risks.

Though it is a good option for EPF members to withdraw certain amount of their EPF savings for investments in unit trust, but it is important for them to understand the investment before putting their hard-earned retirement fund in it.

Whatever the rate announced by EPF is, it pays for its members to be aware of how their savings are growing. Though EPF contribution is compulsory, we can still take proactive steps to scale our retirement fund to ensure our retirement dream can be fulfilled.

Take the first step by monitoring your contribution and the growth. EPF members can access the latest EPF statement online via i-Akaun at myEPF website. Alternatively, members can obtain their statement via EPF kiosks or visit any EPF branches.

With 6.40% dividend rate, would you choose 8% or 11% contribute rate? Find out what it means to your EPF savings.