One reasonably prosperous country, spending more on cultural shows and entertainment. The other is a Malaysia struggling to get by. This ‘other’ Malaysia is caught by rising prices and are unable to keep up with inflation.

The real question is whether this problem is getting worse? Newspapers are certainly making it sound like the gap is widening, with the poor getting poorer and the rich getting richer. But that isn’t the whole story.

Overall, the report shows a reduction in the ratio of B40 earners to the T20. The Gini coefficient – which measures income inequality – showed an improvement from 0.513 in 1970 to 0.399 in 2016. In this case, a Gini coefficient of 0 would show perfect equality, while 1 would show all income concentrated in a single household.

On the whole, it would appear that the wage gap is indeed decreasing. At least statistically speaking.

Where does the growth come from? 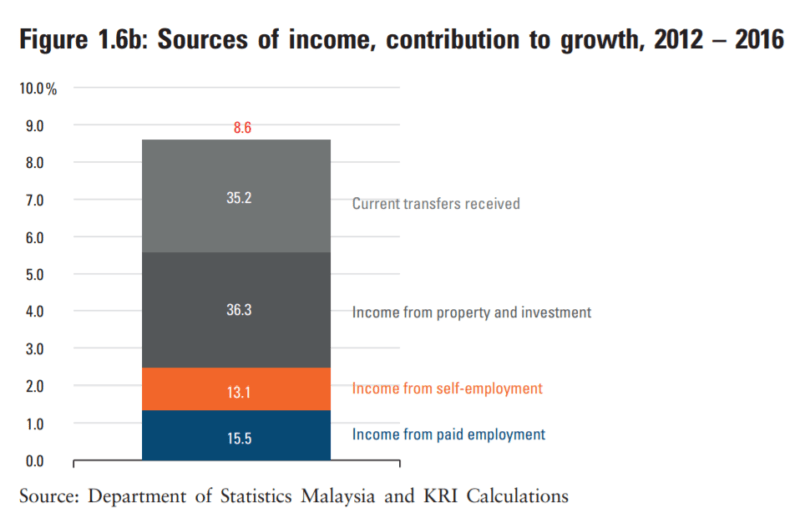 However, the same data showed that income from paid employment dropped by a marginal amount. This was being replaced by income from property and investments, and from a category called ‘current transfers received’. This covers government aid (read: BR1M) and money transfers from family members.

Notably, the current transfers received category made up 35.2% of the annual growth to household income. On the other hand, income from property and investment contributed slightly more at 36.3% to the growth.

Both self-employment and employment only contributed 13.1% and 15.5% respectively. What this potentially shows is that one should either have enough money to invest in property or be poor enough to qualify for government aid.

What about real income?

The real story about income has more to do with how much is left after necessities such as food and rent have been paid. KRI’s report shows that households earning less than RM2,000 would have only RM76 (accounting for inflation) left every month, down from RM124 in 2014. This leaves them extremely vulnerable to emergencies or sudden price changes.

It should be noted that residual income in this case refers to any wages left after expenditure, including those spent on things like taxes, transportation, healthcare, and recreation. Although the lower income brackets are still spending on entertainment, there is not much leftover for this category.

Overall, households earning less than RM2,000 spent 94.8% of their wages on these consumable items.Compare this to the median income earners that spent 67% of their incomes.

However, spending on entertainment and other consumable items are not the key takeaway of this. The less we have leftover every month, the less we have to save for our financial goals. With just RM76 every month, it will take a household 33 years to save enough to pay the down payment of a RM300,000 property (considered affordable housing)!

The less discretionary income we have, the less likely we will achieve our financial goals, be it buying your first property or saving for your retirement.

While it’s tempting to think that the drop in residual income is due to a weakening economy where everyone suffers together, the great divide between income brackets tells a different story.

Higher income earners may have lower residual incomes, but that is due to an increase in expenditure. Essentially, rich people are simply spending more of their money on consumable items. On the other hand, low income earners have been feeling the squeeze and have been spending less overall. 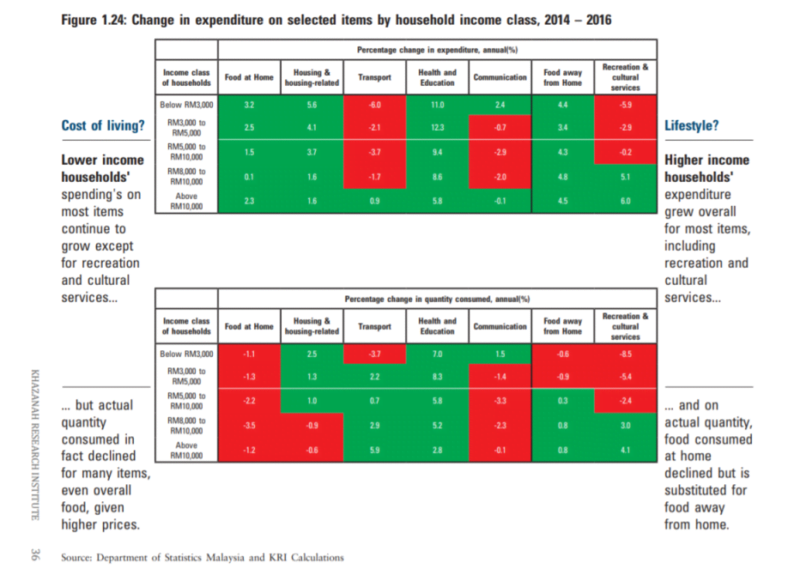 Despite this, rising prices have seen all households inevitably see their expenditure increase, whether or not they consumed less food.

Recreational and cultural expenditure tells a similar story of the wage divide. High income households have the wages to spend on entertainment, while those in the middle to lower brackets have perhaps elected to spend less.

KRI admits that while the income gap has statistically shrunk, the actual number of people living below the poverty line has increased. In fact, the number of households living on wages that are less than 60% of the median wage has been on an upward trend since 1995. However, it registered a decrease between 2012 and 2014.

Similarly, the researchers cautioned that the Gini coefficient may not be reflective of the true state of Malaysia. The data used in the report was collected from a long-term survey, which excluded several categories of households. This includes the top income earners (which were very difficult to reach) and foreign labourers (which would inflate the low-income numbers).

In fact, adjusting for the missing categories, KRI estimates that Malaysia’s true Gini coefficient would be at 0.441. Roughly 9% higher than the sovereign investment fund’s research shows.

KRI also warned that Malaysia is unusual among developing nations. The income share from labour has been on the rise in the country, going against the trend of reducing expenditure on income as more automation and technology becomes available.

In other words, our country has been opting to hire more low-skilled workers instead of investing in new technology.

This has apparently helped low-income earners and reduced the wage gap. However, it could have negative long-term effects, as labour intensive industries have trouble scaling to meet modern demands, which could leave us left behind as the rest of the world modernises for the 21st century.

But then again, adopting modern technology could potentially reverse the positive trend of boosting low-income earners, especially if there is no structure to provide training for the demands of a high-tech workforce.

Overall, it means that Malaysia has been moving in the right direction. Efforts to improve the lives of the B40 have not gone to waste, especially considering how government handouts played a big part in increasing household income. However, financial aid is just a short-term solution and may cause more harm in the long-run.

Despite all this, there is still a massive gap between how the high- and low-income earners have been leading their lives. The imbalance is very noticeable when one segment of society is tightening its belt while the other is consuming more.

Sadly, many of the existing programmes to help the B40 do not appear to have long-term appeal. Handouts appear to have had a negative impact on the country’s finances, while expanding the reliance on labour could leave a massive gap in terms of R&D development.

KRI’s report doesn’t make recommendations as to what is the right way forward. It’s only there to illustrate the economic reality that is Malaysia. If anything, it shows that making plans for the long-term may require a lot of sacrifices right now.