Use Exchange Rates To Pick Your Next Vacation

It’s coming to the end of the year, the time of the year when most people will be planning for their year-end holiday. However, holidaymakers earning Ringgit who are planning a trip abroad could find that 2014 isn’t the best year to grab a bargain, no thanks to the weakening Ringgit against most currencies.

Continuous drop in the value of the Ringgit over the past year has made it harder for Malaysians to travel overseas for a holiday. However, Malaysia is not the only one sliding downward. With most of the countries in the Europe and also the US, moving in the same direction in terms of currency, going on a Eurotrip may not be such a bad idea, compared to 10 years ago. At the time of writing, RM1 is equivalent to US$0.3, €0.24 and £0.187.

By looking at the currency when choosing your travel destination, you may find yourself getting more out of the same amount of money. RM100 may only have gotten you £14.28 back in 2004. Today, you get £18.80.
If you are planning for a four-day-three-night break for two, consider these destinations and see how far your Ringgit can stretch. Here we compare the costs of each destination by collating the prices of typical tourist purchases, which are a meal for two, sightseeing, transportation and hotel.

New York City is one of the best cities in the world to visit. With the US currency at 3.32 against the Ringgit, we are undoubtedly at a disadvantage. Here is roughly how much you need on an average holiday in New York. 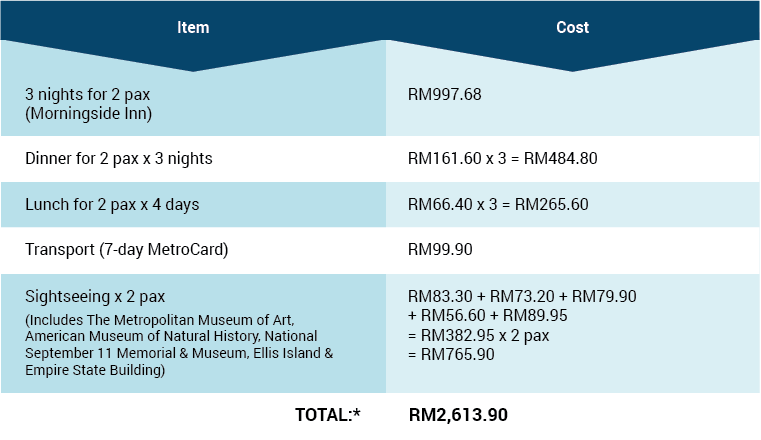 A holiday for two in New York City will roughly cost slightly below RM3,000, not inclusive of flight and shopping. However, who can resist shopping in the fashion capital of the world, especially when you have access to premium factory outlets in Woodbury?

If New York City is not the place for you, consider another dream holiday destination: London, UK. Currently, £1 is about RM5.33, which is steeper compared to the US Dollar. However, compared to the rate 10 years ago (RM7 for £1), a vacation in London now doesn’t sound too bad. 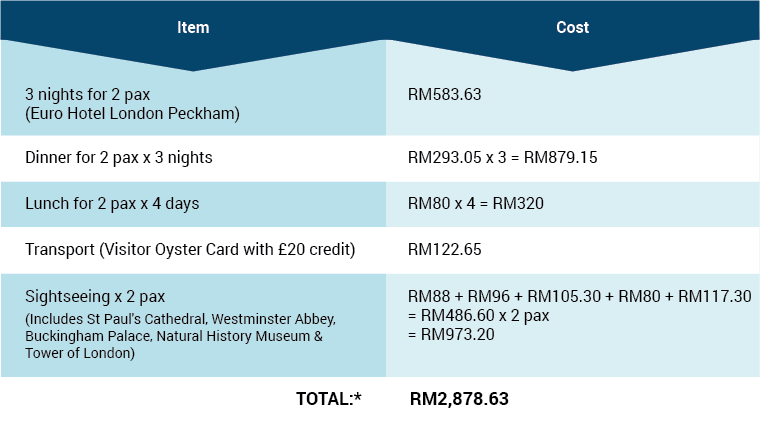 Even though the exchange rate for British Pound is much higher than in the US Dollar, certain things are cheaper in London compared to New York City. You can get a two-star rated hotel (on Agoda) for cheaper than a hotel in New York. Overall, a vacation in London for two cost slightly higher than New York City.

Barcelona is a major cosmopolitan city in Spain and now may be a good time to take advantage of the economy crisis that befell the Europe. It makes exchanging money a whole lot cheaper. Here’s the rough breakdown of how much you need to spend for a holiday in Barcelona: 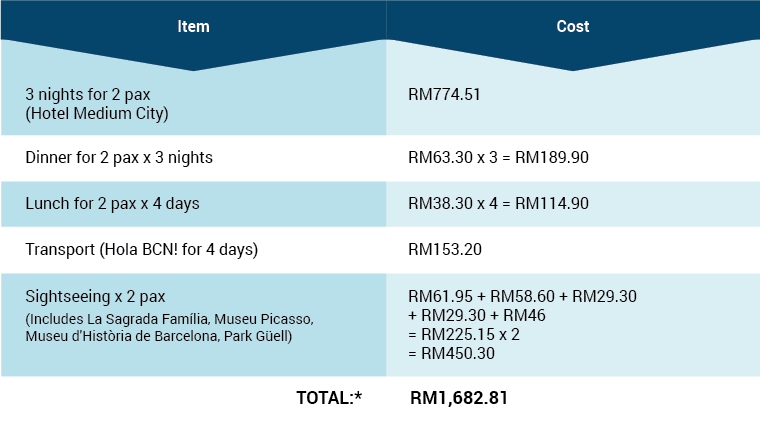 Due to the sluggish economy in Spain, Barcelona is a relative bargain compared to most of the major cities in western Europe. A four-day-three-night vacation in Barcelona, can cost way lesser than what you would spend in the US and UK. It is definitely time to consider saying Hola to the Catalan!

Known as the cultural capital of Australia, now may not be the best time to visit the dynamic and cosmopolitan city. You may find your Ringgit less stretchable due to the strength of the Aussie Dollar. 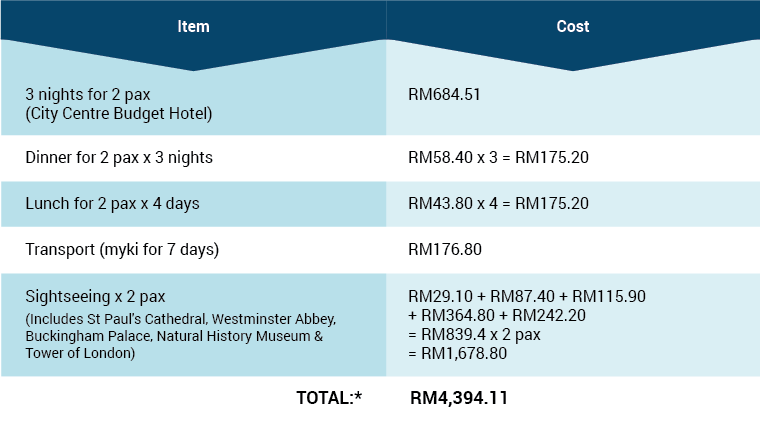 Whatever you are saving from the flight fare, you are paying for your expenses there. Melbourne is definitely an expensive place to explore now, especially if you are planning to visit places that are out of the Zone 1 and 2 of the city.

Japan is the perfect country to highlight the fact that even though the currency of the country is weak, it does not reflect the living cost. Though the Japanese Yen has a lower value than the Ringgit, we may find our money worth less in the land of the rising sun. 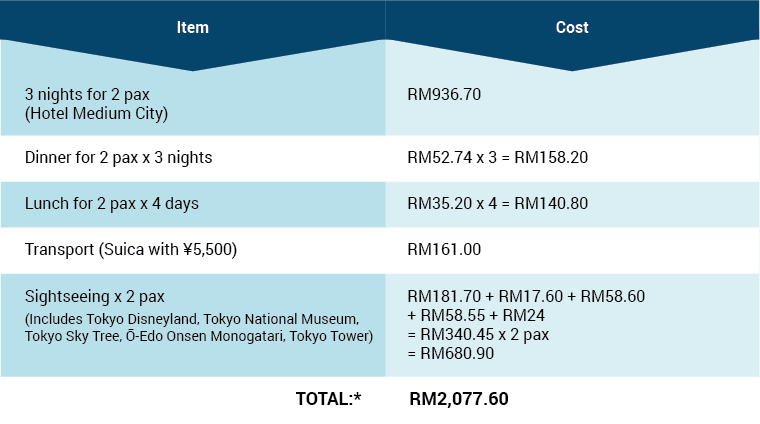 Tokyo is a beautiful city, but it is definitely not cheap to visit. Without calculating the amount you may need for shopping, you will need at least RM2,077.60 just to explore the city. However, if your finances allow, it will definitely be worth it for the cultural experience you get from the visit (and it’s still cheaper than the US or London).

You should not only take into consideration the currency rate when choosing your travel destination, but also the rate when you are booking and exchanging money for the vacation. If the rate of the country goes up, then you would have saved some money when you pre-booked your accommodation and other tours for sightseeing. Though unless you have access to a time machine, this will be pretty hard to do for sure.

To get the best out of your Ringgit, it pays to monitor the currency rates for the countries that you wish to visit. However, it is also important to consider the cost of living in the country. Though some countries may have a lower rate compared to Ringgit, it doesn’t mean that things are cheaper there.

Start planning a vacation and save some money using Miles points. Find out how one Enrich Mile is worth.

* The amount does not include money spent on shopping and also flight fare.