Singapore Vs Malaysia: Who Reigns Supreme In Medical Tourism?

The Health Ministry recently expressed hope that the government would increase its allocation by 10% to 15% for the upcoming Budget 2018.

Its director-general Datuk Dr Noor Hisham Abdullah said this was necessary given the steady rise of outpatients and in-house patients in government hospitals and clinics since 2015.

According to the ministry, 20.26 million outpatients and 2.4 million admissions in government hospitals in 2015. The figure has since risen steadily last year and it expects it to increase this year as well.

It’s a fact that healthcare across the globe is rising and paying exorbitant fees back home has urged people to look elsewhere for similar or even better quality of medical treatment.

Enter, medical tourism. Patients Without Borders, a medical travel site, using US costs across a variety of specialties and procedures as a benchmark, ranked the average range of savings for the most-travelled destinations are as follow: Now an article in The Straits Times said that while Singapore might be one of the region’s top dogs when it comes to medical tourism, its neighbours are swiftly closing the gap with Malaysia taking the lead when it comes to a cheaper alternative.

But the question is how cheap? Before we dive into a comparison of which side of the Johor Strait is better, keep in mind that medical tourism here deals with private hospitals and care providers.

So let’s see how both countries are doing in terms of medical tourism.

A beeline for the peninsula

These figures encompass all registered patients with a foreign passport, which by default also encompass expatriates, migrants, business travellers and holidaymakers for whom healthcare may not be the main motive for their stay.

Also as a result of a higher number of medical tourists, the council also noted endorsed medical facilities in the country have increased over the year.

As for revenue, the country grew from RM299 million in 2008 to RM683 million in 2013. Demand is increasing, hence the Health Ministry is expecting Malaysia to hit RM1 billion by end of this year.

The leading state contributing to this industry is Penang with 60% of medical tourists coming to Malaysia making a beeline for the island. In 2014, hospitals accrued RM370 million in revenue and the following year it went up RM390 million.

But world-class services across the causeway

Singapore has been seeing a softer outlook amid a decline in growth of foreign patient numbers, so overall revenue is affected.

According to UOB Kay Hian, foreigners made up 40% of healthcare provider IHH Healthcare’s business in Singapore in 2013 but this fell to 30% in 2016.

Now to Singapore’s credit, it has one of the world’s best healthcare systems in the world. Whether it’s blood supply ranks or healthcare outcomes, the republic is certainly known for providing some of the best services.

But… it’s the second priciest medical tourism destination in the world and the most expensive in Asia.

Singapore vs. Malaysia: How high can you pay?

Typically, it is a matter of cost, so here are the top five most expensive treatments: 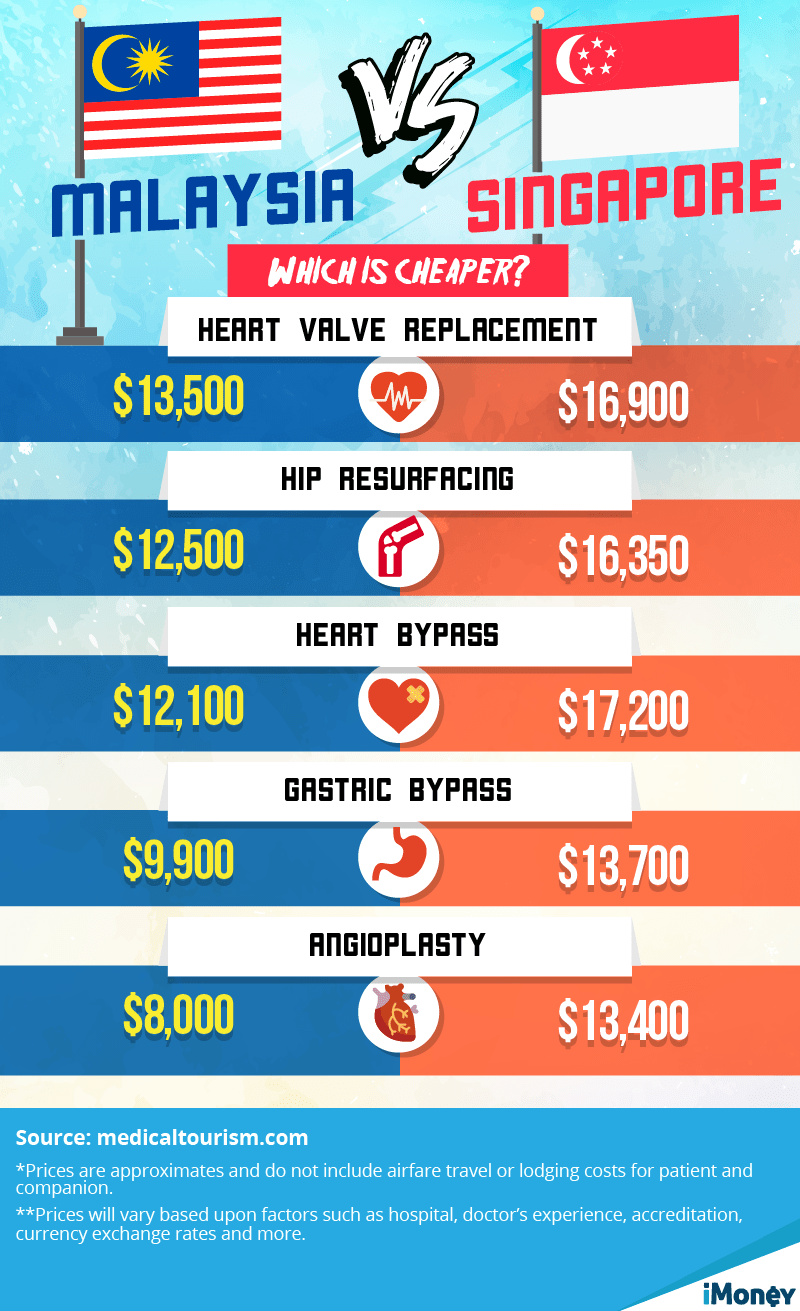 For example, if a medical tourist is seeking a heart valve replacement, he can potentially save RM3,400 simply by doing it in Malaysia alone.

But there are some things to note. While Malaysia is offering lower costs and growing availability of quality care, Singapore is still the favourite destination when it comes to its “patient experience”.

In fact, the island is going all the way by retaining patients through various offerings such as the “luxury experience” which is akin to a hotel, but that’s also slowly being matched by Malaysia.

Perhaps what’s still keeping Singapore in the game is its ability to cater for patients who needed world-class care for complex conditions. For example, new drugs for life-threatening conditions like cancer was approved for use relatively faster in Singapore compared with elsewhere in the Asian region.

This means patients can skip travelling to places like the United States to get such drugs. They can just cross the causeway to seek such specialised treatments and one country that has been doing this is China, where Singapore is famous among the affluent.

However what’s in it for the common man?

For Malaysians, medical tourism can significantly boost gross domestic product (GDP). But this also has an inverse effect: it can potentially contribute to rising medical costs, and this is simply because medical tourists are seen as part of the domestic demand pool.

According to Budget 2018, some RM30 million will be allocated for MHTC to spur further growth of the medical tourism industry.

No doubt it will boost the economy, but how much it will further inflate prices is yet to be ascertained.

The good part is that the country seeks to gain from this by way of government revenue, whereby the government not only obtains taxes from those employed in the medical tourism industry but from the goods and services tax imposed on vacationers as well.