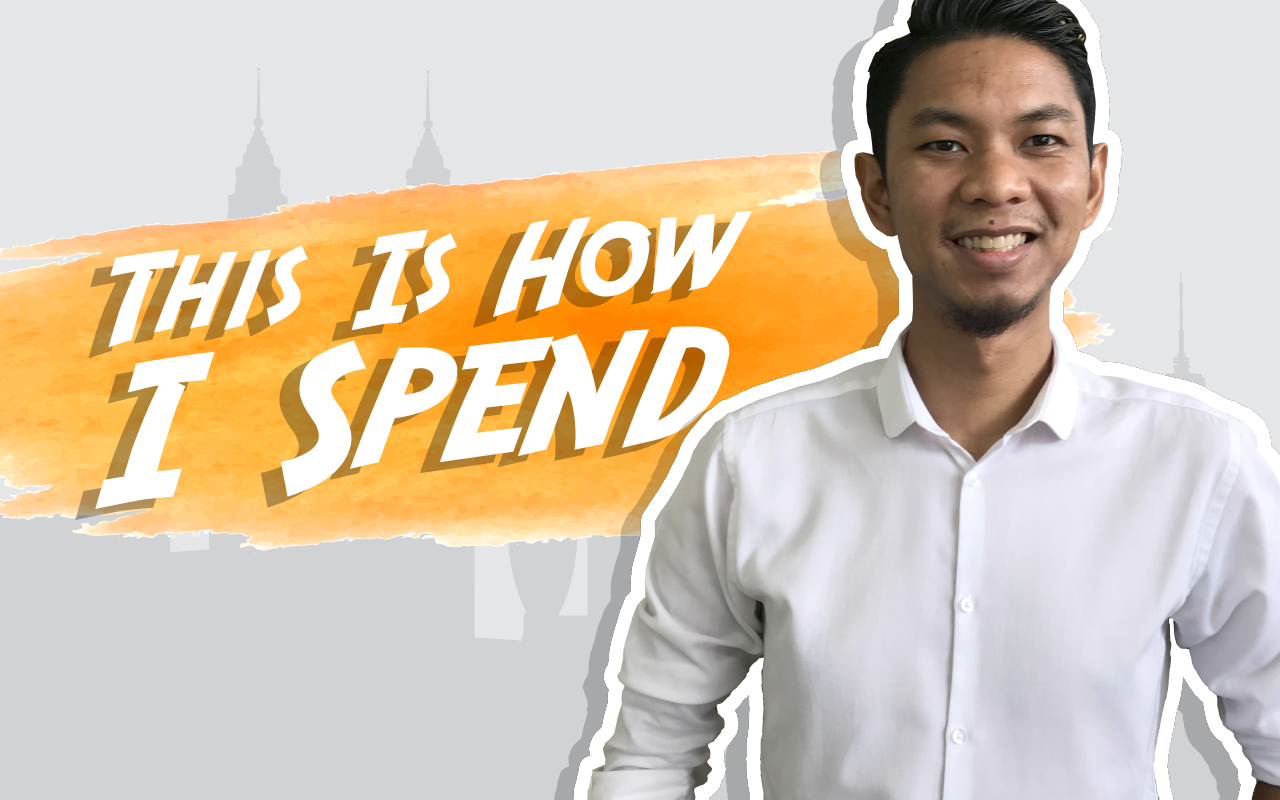 I’m Nadhir Ashafiq And This Is How I Spend

TheLorry is an on-demand platform for land transportation with an eye for regional expansion.

It recently raised a US$1.5 million Series A round led by SPH Media Fund as well as moved into the e-commerce vertical, working with leading online vendors and retailers to deliver bulky items.

We recently caught up with its young co-founder Nadhir Ashafiq to find out how he leads one of the brightest start-ups in the country and, best of all, how he spends his money:

Tell us what inspired your move from a steady, corporate job to founding a start-up?

My first job was in CIMB Investment Bank. I was part of their Complete Banker programme; I joined as a management trainee.

I had to go through four interviews just to get inside and then I got headhunted into an airfreight and logistics company, and I stayed there for two years.

I was earning a good salary at that time and I was comfortable, but I felt there was no job satisfaction, so I jumped two feet into entrepreneurship and quit my job in 2014.

I told myself, “Okay. I am going to do this for a set period of time.” I gave myself until the end of that year, and if nothing worked, I would just take up another job.

My first foray was creating an app as I was influenced by the Instagram acquisition by Facebook for US$1 billion. That inspired me to research about technology start-ups and then I went ahead and built my own.

It was called Glokalise – a combination of “globaI” and “localise” – and it was built as a social networking app meant to connect travellers and students into one app for them to communicate and socialise.

Although, it didn’t really take off, I learned a lot from that experience.

I was demotivated when the app didn’t work out. This was around May-April 2014. To make ends meet, I helped friends of friends to do a little bit of research for some money, or to do some company profiles. I also helped my wife build her baby-clothing business on Instagram.

I was doing many things at the same time, and one of those many things that I did was TheLorry.

We came up with the idea around the same time when the Glokalise app went south. We started an MVP or minimum viable product, and just tested the response of the market towards a simple product. Then we thought, okay there’s real potential here.

That’s when Chee, my co-founder, and I basically pumped a little bit of money, RM6,000, just to build the first version of the website. We launched officially on September 2014, and we’ve never looked back since.

Start-ups burn out bright, and pretty fast. What are some of your money management tips?

I subscribe to the book, The Richest Man in Babylon. One of the timeless principles is you got to take 10% of your wealth each month and put that into compounding investments.

I try to do that every month by setting at least 10% for investments and savings. Sometimes, I save more; sometimes I save none.

Due to my hectic schedule, and I really don’t want to think about finances at the moment, all my monthly expenses are automated.

My telco bill is automated, and every month it’ll just get deducted from my account. That’s the same for my car, insurance and other bills.

You mentioned investments, so give us a peek into your investment portfolio.

I am still young and I know I should focus more on riskier assets, like what they tell you in university. However, I need time to research and time is of the essence to me right now, so my portfolio at the moment is simple: ASN/ASB.

So if time is of the essence, how do you track your finances? An app, perhaps?

At the moment, I don’t use any app. The thing is, my spending is quite liberal and what do I mean by this is, I actually belanja my teammates quite often. So, sometimes I claim; sometimes I don’t.

As for personal spending, a lot of my expenses is on food and drinks. I don’t really shop; my wife does the shopping. So my expenditure is for my wife and kids, food, and your typical car and household expenses. I don’t spend on anything else… I’ll also save little for travelling.

But in terms of an app, I don’t use any. It’s just looking at my credit card statements and bank balance, and let’s say if it is too low then something’s wrong and needs attention. It is more intuitive for me in that sense.

I don’t drill down to the very cent, and that is my personality. But in the company, you cannot have my personality managing accounts. You need to have a really analytical mind, and a straight shooter to manage your accounts, which we have.

Entrepreneurship is a money-making decision in one sense or another, and you mentioned earlier on trying something but that didn’t pan out. How do you recover from an untimely or bad financial move?

I don’t think I have recouped that investment yet, in cash terms. I think you just have to suck it up and move on.

Being an entrepreneur there are always hits and misses but you just need to be right once, and that one right will pay off everything else.

Name one financial red flags that prompt you to quit or change strategy.

Start a business with your own discretionary cash. Don’t do it by borrowing money, especially if it is a tech start-up. It’s very risky; you never know things will go well or not. You have to experiment but try to do it with your own savings.

So a red flag is when someone uses a personal loan with high interest charges to fund a business idea. I think more and more young entrepreneurs have been inspired by people like your co-founder Lee Ching Wei or Anthony Tan of Grab, but I would like to caution other aspiring entrepreneurs: Please try to validate your idea first.

Spend as little as possible and try to bootstrap for as long as possible, and if it’s part of your strategy, go ahead and raise funds to sustain the business.

Let’s expand on that, your advice to budding founders in handling cash?

Cash flow is the lifeblood of any business. When you are in the idea stage, don’t spend RM100,000 of your personal money or family wealth into building the first version of the product.

Ideally, spend less than RM5,000, but this depends on the business. Maybe you need to spend more to validate the idea, but try to spend below that ceiling.

If you are running an e-commerce business, or some form of marketplace, it won’t cost much. It will cost even less if you want to start like a publishing business or a blog, where you monetise using sponsored posts or advertisements.

The keyword here is to validate your idea. Validation is a process that I champion because I didn’t validate my idea when I ran that social networking app.

Validation here means testing your product on a sub-segment and see how they react and then go through an iterative process to improve the product.

How do you use credit responsibly?

I think banks hate me because I don’t carry forward balances on my credit card. I always pay on time. My advice would be to watch out as debts can be good or bad.

I think this is why more and more young people are declared bankrupt nowadays because they take on too much debt against their monthly income to maintain a certain lifestyle.

I am probably guilty of that, but I try keep it under control.

What else would you like to add to this that would benefit our readers?

I would like to speak to the entrepreneurs. A lot of people want to start their own business but they are probably not sure when to quit their job in order to do this.

There are multiple ways to do it. You could do it my way, create a bit of savings, and then just jump two feet into it and see how it works. If nothing happens within a set period of time, jump back into employment.

Another strategy is to take a sabbatical. I think some banks allow paid sabbatical, so you can use that to run your own thing.

If that is also impossible, then you can do it part-time. Personally, I feel businesses can’t be built part-time. You can sort of dabble a bit, but it won’t really take off until you put full-time effort to build it.

I am not saying it can’t be done, in fact a lot of businesses are built when the founder is working, and he/she works on the business at night or weekend. But it can get a bit tiring. So this would a last-resort kind of thing.

Great. Now, who would you like to see answer these questions?

POS Malaysia chief Datuk Mohd Shukrie Mohd Salleh. He is pretty young and the head of a government-linked company, so it will be good to see what he has to say.

This interview has been edited for brevity.

The How I Spend Series asks CEOs and experts to share their financial tips, routines and more. Have someone you want to see featured or questions you think we should ask? Email Emmanuel at emmanuel@imoney.my.

*The views and opinions expressed in this article are those of the interviewee and do not necessarily reflect the official policy or position of iMoney.my.