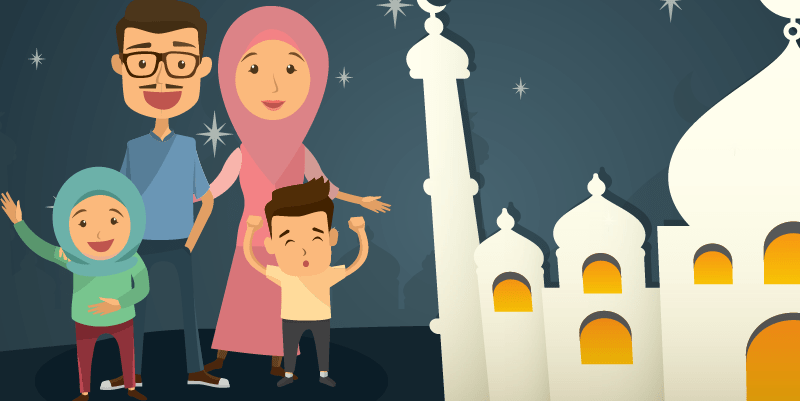 Malaysians Spend The Most On Food & Groceries During Ramadan

Ramadan is a holy month of fasting and introspection for our Muslim brothers and sisters. In Malaysia, it is also the busiest period and marks one of the biggest spending month of the year.

Despite majority of the population only spending on two meals a day, spending is expected to increase as we count down to Hari Raya Aidilfitri.

In fact, e-commerce sites expect a 50% increase in online spending, especially on items such as electronics, home gadgets and clothing apparels. Other expenses that are bound to increase are spending related to car services and road safety-related items as many Malaysians prepare for their balik kampung journey.

With these added expenses, how are Malaysians planning their budget this Ramadan? Are they prepared? Do they even have a budget to begin with? And most importantly, are they doing a good job sticking to the budget?

Majority of the respondents in our Ramadan Survey spend the most on food and groceries, while their balik kampung sojourn comes second.

However, thankfully, more than half of the respondents (54%) do have a budget for Ramadan, but about 47% of them exceeded their Raya budget.

Here’s what we found out about Malaysians spending behaviour in this festive season:

Malaysians spend the most on food and groceries

Despite having less meals during Ramadan, the survey found that almost everyone spent the most on food, drinks and groceries. This spending category ranks the highest in the top three list of spending during Ramadan.

Although overall spending on baju raya and accessories ranks fourth, it is the second highest spending for those who earn below RM3,500 a month. Balik kampung expenses ranks third for this group of people.

Malaysians are split into half on Ramadan budget

Fortunately, slightly more than half of the respondents (54%) reported to have a budget for Ramadan and their Raya spending. Of those who have a budget, 47% said that they exceeded their budget with their Ramadan spending, while 53% said they stuck to their budget.

Surprisingly, more than half of those who are in the higher income brackets (RM5,000 and above) exceeded their budget. 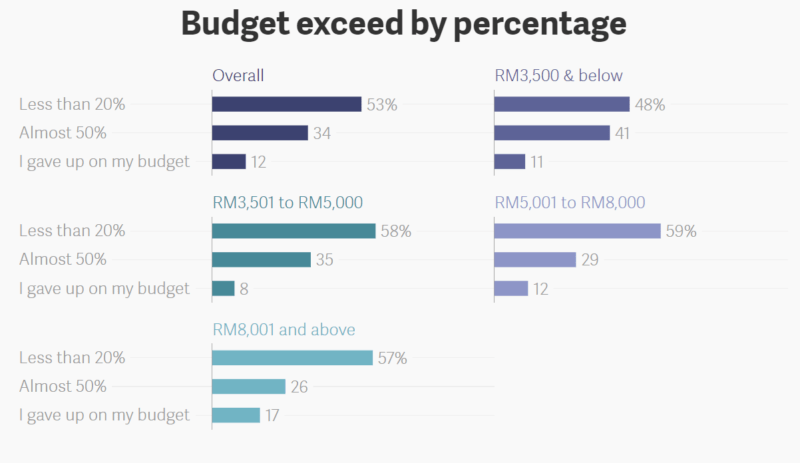 Most of those who exceeded their Ramadan budget have exceeded by less than 20%. However, those who are earning RM3,500 and below are dangerously close to exceeding their budget by 50%. So, how do Malaysians cover the extra expenses?

Although most Malaysians dip into their savings to cover the extra expenses, and some just use their monthly income, the findings do point to a worrying trend.

Credit card comes out as the third most commonly used method to cover extra expenses that Malaysians did not include in the budget.

According to Maybank IB Research, credit card spending in the economy rose 5.3% y-o-y in January 2017, driven by the seventh consecutive month of double-digit increases in spending by cardholders which grew 17.2% y-o-y in the same period.

Without proper management and financial prudence, a credit card can lead to insurmountable debts. If a credit card is used for extra spending, cardholders should consider facilities like a 0% instalment payment plan or even balance transfer, if the balance is too huge for their finances to handle.

Most Malaysians would turn to savings first, regular income second and credit card third, when they find themselves exceeding their budget during Ramadan:

Even for those who do save to cover the extra spending during Ramadan, most of them (54%) do not save more than RM1,000.

What can Malaysians do to manage their Ramadan spending?

Based on the findings, Malaysians do know the importance of having a budget in anticipation of the festive period. However, they will need a lot more help and discipline in sticking to the budget. Budgeting should also be realistic and if extra spending is required, they should prepare in advance for it by saving more, or consider how much of their savings they can afford to allocate to cover the expenses.

Other facilities like credit card, though convenient, must be used carefully. Features like 0% instalment plan can be useful to manage cash flow, but repayments must be prompt for it to make financial sense.

If you do rake up a debt, it’s important to take action promptly to avoid snowballing of the interest. One feature Malaysians can consider is balance transfer. This way, you won’t have to deal with a huge, unmanageable debt when you return from your Raya break.

Above all, prudence in spending is important. If you do find yourself stretched thin in your spending, prioritise your spending and only spend on those that are necessary.

The iMoney Ramadan Survey covers the millennials with 61% of the respondents aged between 20 and 35 years old. Here is the breakdown of the demographics: