In today’s digital world, every bank has an app for your phone or tablet and for many people, it is fast becoming the primary way to interact with their finances. As online banking moves from web browsers to app stores, banking apps could become a key factor in choosing a bank account.

However, most of us don’t have the time or patience to sign up for an account with every bank to test which apps are good, which is why iMoney has done the test for you.

We are putting the latest upgraded banking app from Maybank2U, promising to transform the way we bank online, to the test with another widely used banking app, CIMB Clicks.

Find out how these two mobile banking apps fare against one another, and which app will be the victor.

First thing you notice with the new M2U app is that it actually looks pretty good and it follows the design theme that they’re taking with their website – very Windows Metro. It also offers three themes that you can change to, if you are ever bored with the design. However, we all know that how an app look may be able to score some bonus points, but an app’s success really depends on the functionality.

The CIMB Clicks app looks pretty simple and gets to the point quickly. But really, the Maybank app does look nicer.

This app is easy to use, especially if you are already familiar with the web version of Maybank2U. The added security on the website login is also implemented on the app, where the pre-set image and caption are shown before you key in your password.

On the other hand, the login process for CIMB Clicks app only requires user to key in the username and password without prompting the secure word like its web version. This in our opinion is pretty sufficient and fast since the app should be less prone to phishing. Having the extra layer of security can be re-assuring but can get quite annoying but for some, safer is better.

This is really a personal preference on your accepted level of security, we feel that since the app isn’t susceptible to phishing we’re happier with CIMB Clicks’ quick log in. In addition to the basics of viewing your account number and balance, you can also view any floating amount or cheque clearance, as well as M2U, transaction and debit card transaction history. This is a comprehensive view of your account that mirrors the web version closely so you don’t have to go back to the web version to find out more information.

On CIMB Clicks, you can also view most of the same details but not separated according to the type of transaction like M2U. All the transactions are viewed based on the calendar.

The segregated view based on the type of transactions offered by Maybank is very welcome on a mobile app and on its own already makes the app more useful than CIMB Clicks. Another added feature in this snazzy new app is the mobile fund transfer. Previously, only allowing transfer to your own account or your favourite accounts, you are now allowed the flexibility of transferring funds to anyone with a Maybank account with just their mobile number!

This may be new and exciting for M2U, but this feature has long been available on CIMB Clicks, through OctoSend. Though not many people are aware of it, so M2U gets extra points for being more user-friendly for this feature (and using an easily understood term).

The Cardless Withdrawal Service enables M2U users to initiate a fund transfer to any Malaysian mobile number. Once a transfer is done, the recipient will receive a secure code via SMS. All they need to do then is take the SMS code, key it into a Maybank ATM (without needing to insert any card first) and withdraw the money. This is great feature especially since you don’t need to even have a Maybank account to receive the transfer.

Both M2U and CIMB Clicks apps allow Interbank GIRO and Instant Transfer for other banks, though it’s limited to favourite accounts only.

While the Maybank app has some pretty neat features for fund transfer we were quite upset with the difficulty in finding these functions. We knew they were there but we spent quite a bit of time trying to find out where exactly they were. Paying bills has come a long way. Gone were the days of queuing up for hours just to pay a bill, and don’t forget, this can only be done during office hours! With online banking, we can make any payments while still in our pyjamas. With the latest addition to the M2U app, you can make one-off payments, too! However, the available billers for this are limited.

Sadly, CIMB Clicks is still restricted to the payment for favourite bills only. This is a security measure to avoid someone draining your account if they manage to get your phone and get through the login process. It can still be frustrating if you want to send money or make a bill payment on the go.

With the log in security measures in place we shouldn’t need this, so we give Maybank’s app props for making it easy to pay any bills while sitting on our thrones.

In its bid to become a more interactive app, M2U has added a Promotion and an ARound Me options. Promotion is essentially a list of promotions and deals available for Maybank customers, either using their credit or debit card.

However, the ARound Me function is slightly more sophisticated where users can now search for promotions, branches and ATMs within 2km radius of wherever they are. Though it sounds fancy, but it really depends on whether the app is able to track your current location or not. And from our experience, this can take some time.

It’s a gimmicky feature that we’ve not been able to make complete use of now but it’s something CIMB Clicks doesn’t have at all. But it does make the Maybank app a lot heavier (34 MB!) The M2U app is on its way to eliminate the web usage completely. Users can almost do everything they need to go on this app. Perhaps because of its extended functionalities, the app definitely suffers from much more lag than the CIMB Clicks app. All in all, this is quite a breakthrough for a mobile banking app in Malaysia.

On the other hand, CIMB Clicks is lauded for its clean design and fast user-experience. When it comes to functionality, it still has some restrictions. At the end of the day, you will still need to go on the web browser to do some of your banking. Mobile banking all the way for CIMB Bank? Maybe not yet. 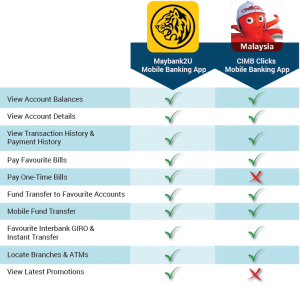 The new and improved M2U app sure offers a lot more functions than the average mobile banking apps in Malaysia, and we are sure the others will soon follow suit.

However, if you are not always on the go, and prefer to do your banking on your desktop, then the CIMB Clicks app is just great. However, CIMB bank will do well to improve and update their app to include more functionalities and reduce some of the restrictions if they want to give M2U a run for their money!

UPDATE: This article previously stated that the M2U app does not allow Interbank GIRO and Instant Fund Transfer. This is incorrect, and has been rectified accordingly. M2U’s Cardless Withdrawal feature is also added in the new update.

Save money on banking by going online! Here’s how online banking is out to replace the cheque facility!