Can Malaysians Afford The Fuel Hike? As Malaysians anticipate the announcement of Budget 2015, they were once again taken by surprise with the reduction of subsidy for fuel, as another round of petrol price hike was announced — with RON95 and diesel both saw a RM0.20 hike. The last hike was on the third quarter of 2013.

Despite assurances stating that inflation is under control, Malaysians are becoming increasingly fractious over the cost of goods in relation to wages. To add fuel to the fire (pardon the pun), the fuel hike announced mere days before the tabling of next year’s Budget was definitely not welcomed.

Many netizens took to social media platforms to air their grievances over yet another hike. However, we can’t really say that the hike is sudden or shocking. The government has been talking about subsidy rationalisation, which started last year, in its effort to reduce the country’s debt.
In 2013, the total subsidy borne by the government for petrol was a whopping RM24.8 billion and with the 20 sen subsidy reduction announced back in September last year, the government has saved RM1.1 billion.

There has been a series of price hikes since May in the current government’s bid to cut subsidies and improve state finances. This has inadvertently resulted in companies holding back on boosting wages due to reduced profit, and also the skyrocketing inflation rate.
The series of price hikes include a 14% jump in sugar costs in October last year, to an 11% increase for petrol a month before that and an average 15% to 16.9% climb for electricity in January, 2014.

Fuel hikes cannot be evaluated on its own as it affects almost everything in a consumer’s daily life. A slight increase threatens consumer spending growth, as most goods are transport reliance. Most machineries used to process food and produce goods are fuelled by petrol, which results in profit being affected, and manufacturers passing at least some (if not all) the bulk of the increased cost to the consumers.

Regardless of how one looks at it, a mere RM0.20 increment in a litre of fuel has dire consequences. You will inevitably see a hike in prices for many other things and services. As a result, the rakyat’s purchasing power will be diminished somewhat.

The furore over the petrol price hike is not really about the petrol price per se but the effect the hike has on the cost of living. Because petrol is so important in almost every single aspect of our lives, a slight change in the price can have lasting effects on the consumers’ expenditure.
This has caused the diminishing of purchasing power among Malaysians. Purchasing power is the value of a currency expressed in terms of the amount of goods or services that one unit of money can buy. Some of the food prices that ballooned after the last petrol price hike in 2013 are: 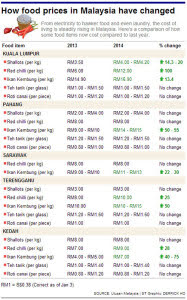 As the agriculture industry is heavily dependent of machineries run on fuel and also transportation from other states to the city, the prices are affected by the rise.

At the end of the day, the loser in the immediate equation is none other than the consumers, especially those from the lower and middle income groups.

Without a proper system to safeguard the interest of this group, all these changes in pricing, and the implementation of Goods and Services tax (GST) can spell disaster for the lower and medium income group in the short term.

Unless the Government is able to introduce an efficient, fair and holistic financial aid to safeguard all segments of the population, their steps in the next few years towards achieving high-income nation will be painful for Malaysians.

Looking beyond the horizon

However, in a broader sense, the Government’s move to rationalise subsidy can have a positive impact on the economy and also improve efficiency and competition among Malaysians.

In the developing world, the governments usually do its best to keep the price of fossil fuels artificially low in the form of price cap, preventing oil companies from charging too much at the pump, or even as a tax break to a domestic oil producer, which then usually passes on the savings. In both cases, the government has to make up the difference.

Chief economist for the International Energy Agency (IEA), Fatih Birol, said, “It’s a failed policy, but we see that many countries continue to follow it.” The reason for this is because politicians know by getting rid of subsidies cause immediate pain for the citizens, a drop in popularity, and sometimes even civil unrest.

Though it is considered an aid to reduce the financial burden of Malaysians, it does not always benefit the poor. The reality is, the benefit of fuel subsidies aren’t spread evenly as people with higher income benefit more from it than people with lower income. The money used to subsidise petrol can instead be put to better use to help pull the poor from below the poverty line.

In Malaysia’s journey to becoming a high-income nation, we need to set real world expectations for the people.

“There will be some pain in moving towards market-based pricing of the currently subsidized-costs of essential food items, fuel and energy,” said Suhaimi Ilias, chief economist at Maybank Investment Bank, in a Bloomberg report.

“Over the long term the economy will gain from a generally more efficient economy.”

One way of making the best out of the situation is to get a high cashback petrol credit card. Find out which is the best.

Need some creative ways to afford petrol? Here are 10 ways to save petrol!