Soaring cost of living is throwing household budgets into chaos in Malaysia. With inflation steadily increasing from 1.2% in January to 2.9% in November this year, households are tightening their belts in anticipation of a financially rough 2014.

But there is a light at the end of the tunnel to what seems like a grim 2014. According to the latest ECA International Salary Trends survey salaries are forecasted to increase by 5.7%.

Will this expected increment be enough to help households bolster their finances and cushion the price hike season ahead?

In addition to subsidy rationalisation and increase in excise duty which has resulted in petrol, sugar, and cigarette price hikes, families in Malaysia are set to face a surge in electricity charges, assessment fees for properties in federal territory, and public transport fares. The prospect of having to pay a Goods and Services Tax (GST) come April 2015 also looms over everyone’s heads.

Based on the latest statistics from the Department of Statistics Malaysia, the country’s Consumer Price Index (CPI) has persisted in an upward trend, rising by about 2.0% compared to last year. The rate is the highest recorded since December 2011 but is in line with expectations. 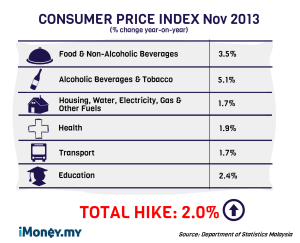 Middle-income group is Taking the Hit

The hardest to be hit by the rising cost of living are those from the middle-income group (individuals earning between RM2,300 and RM7,000 per month). Though this group forms 40% of the workforce in Malaysia and consists mostly taxpayers who drive the nation’s domestic economy, they are not entitled to any financial aid from the government.

According to the example below, an average household earning RM5,000 a month with one child may find it difficult to make ends meet: * Find your PCB amount here according to your taxable salary.

Based on the figures shown above, an average middle-income family in urban Klang Valley will find it difficult to afford insurance or accumulate a contingency fund. This group of consumers are in for a bigger blow come 2014 when most price hikes take effect.

“The middle income squeeze is highlighted worldwide. But in Malaysia, a large proportion of the population falls under the middle-income category. There is no doubt this group will experience price pressure [from the subsidy cut and increase in cost of living] and as a result they have to spend less than before,” said Dr Yeah Kim Leng, group chief economist of RAM Holdings Bhd to The Edge Malaysia.

To alleviate some of the financial burdens currently faced and that to-be faced next year onwards, the issue needs to be looked at comprehensively. The dole hand-out is a short-term measure but it is not a sustainable strategy moving forward.

“The government needs to ensure that welfare reaches the targeted group. Direct cash transfer is one of the best forms of support because it stops leakages and is targeted at the affected groups, unlike subsidies. However, the administrative burden for this is higher,” said Yeah.

Economists opined that for long-term result, the strategy should be to help the middle-income group graduate to high-income earners in order to reach high-income country status by 2020.

Are we ready to brave 2014? It may seem bleak now, but Malaysians are known for being resilient. By arming ourselves with better financial knowledge, we will be able to adapt and make the most out of our money.

Learn how to combat the rising cost of living with these five tips.