Love is not only blind, it can be pretty expensive too. If there is any occasion that preys on your heartstrings and even more so, on your purse strings, it is Valentine’s Day!

Though some couples have sworn off Valentine’s Day, saying it is too commercialised, many still hold dear to this day for its importance in expressing their love for their significant other.

In this case, nothing says: “I love you,” better than a bouquet of red roses, which has stood as a symbol of love and romance throughout the ages. Unfortunately, red roses are also known to cost a bomb on Valentine’s Day.

Just how much more do red roses cost on Valentine’s Day?

Roses do not come for cheap even on normal days, but on Valentine’s Day, a bouquet of 12 roses can easily cost 100% more! 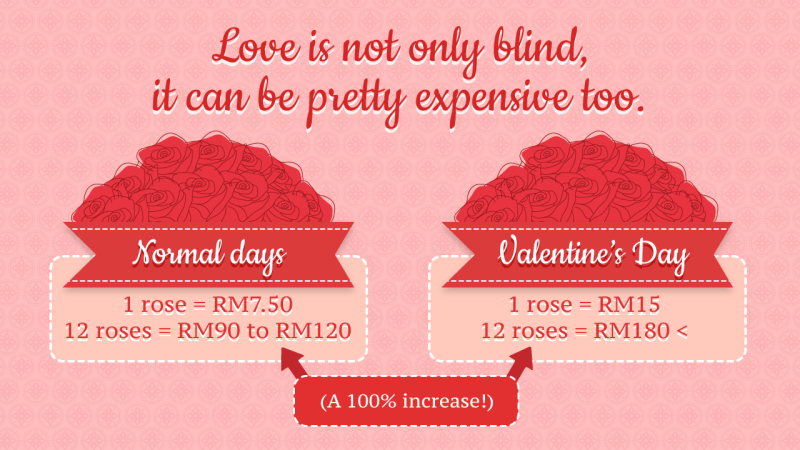 This is bad news for guys everywhere, as the pressure to make Valentine’s Day special usually falls on the male partner (we didn’t make the rules).

The question is, amid the rising cost of living and a generally bleak economic outlook, are Malaysian boyfriends and husbands still willing to spend on their loved ones on Valentine’s Day?

Apparently, yes. According to a recent survey done by Rakuten, Malaysians were willing to fork out up to RM200 on Valentine’s Day.

The survey, entitled Rakuten Shopping Secrets 2015, found that Malaysians were willing to spend an average of RM198.63 to buy their spouse a Valentine’s Day gift.

It also found that respondents were willing to spend an average of RM173.71 on their fiancé or fiancée, RM159.03 on their girlfriend or boyfriend, and RM156.09 on themselves.

The survey, which involved some 500 respondents aged between 20 and 60 in Malaysia, also revealed that 45% of women expect a gift for Valentine’s Day compared to just 36% of men.

Meanwhile, floral store owners we spoke to shared that demand for flowers on Valentine’s Day have not faltered despite the current troubled economy.

“There is still a consistent demand for flowers, especially from Gen Y, who are more focused on lifestyle and relationships,” said John Goh, owner and CEO of bloom2u.com.

Meanwhile, Joanne Ho, founder of Happy Bunch told iMoney that consumers are still willing to spend as long as the goods offered are of good value.

“Demand is still high on our side. We’ve been seeing a huge spike in pre-orders and we’ve already exceeded all our targets so far,” Ho shared.

What do Malaysian boyfriends have to say?

Neo, 23 said that while flowers can be a tad pricey on Valentine’s Day, it is “tradition” and people still buy it.

“My girlfriend is currently 1,000 miles away, eight hours behind Malaysia time. But if she were here, I would get her roses and a nice dinner,” he said.

Meanwhile, Jonathan Heah, 27 shared that while he intends to get flowers for his other half on Valentine’s Day, he will most likely opt for lilies instead of roses, as they are usually the most marked-up flowers in the market during the occasion.

For Eugene Cheong, 25, if that special someone appreciates flowers and appreciates the gesture, then it is worth every penny despite the hefty price tag.

Given these figures and testimonials, we’re guessing that many of you will be having a ball of a time this Valentine’s Day!

Are you looking forward to sending or receiving flowers this Valentine’s Day? Share your thoughts with us in the comments section below!