The third series of the 2014 Auditor-General’s report is finally out. After much publicity on how much money was loss, and how many projects mismanaged from the last series, what news does this latest report bring?

According to the report, a deficit of RM37.35 billion (3.49% GDP) was incurred by the federal government last year 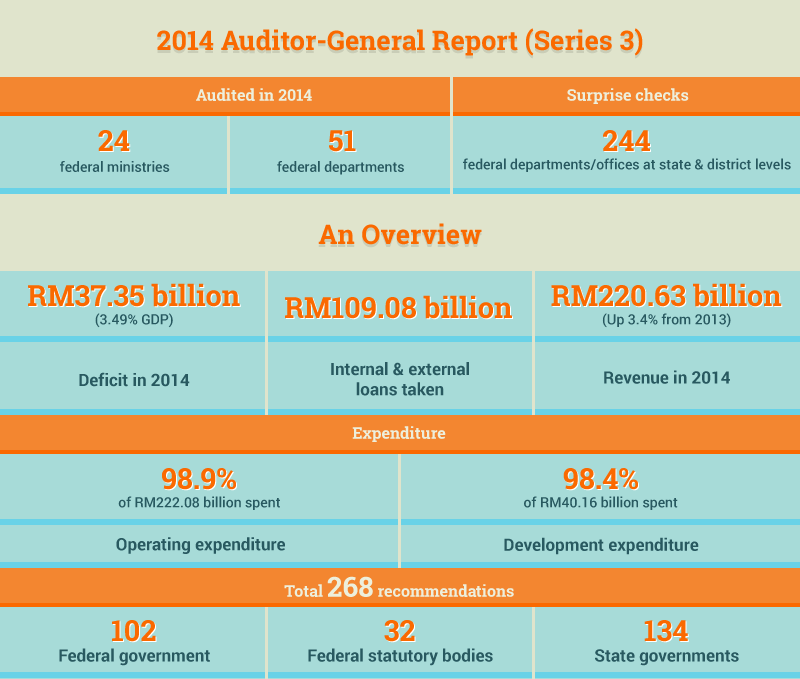 Unsurprisingly, this series of the report found more instances where taxpayers’ money was unnecessarily wasted due to poor management and transparency.

Here are some of the findings released by the report that could have you palming your face the rest of the day:

The latest report by the AG found that the contractor, Sejagat Bakti, in charge of the upgrading project of the Sultanah Nora Ismail Hospital in Batu Pahat, Johor, was appointed through direct negotiations and was given the fast-track by the Finance Ministry. Furthermore, the company has had no history of working on hospital or medical facilities prior to the appointment.

The project was grossly delayed, plagued with a long list of non-compliance issues, with 4,198 complaints lodged during the Defects Liability Period (DLP) that were not addressed completely by the contractor.

Contractors and vendors who are unable to meet projects deadline are typically imposed Liquidated and Ascertained Damages (LAD), and in the case of Sejagat Bakti, the Works Ministry clarified that the contractor had applied for a second extension after the initial 90 days but this was rejected and LAD was to be imposed.

However, the Finance Ministry approved the LAD exemption for Sejagat Bakti on July 3 2015.

AG’s recommendation
The contractor, Sejagat Bakti, to be slapped with LAD of RM13.34 million as a Certification of Practical Completion (CPC) was issued even though the project was incomplete.

The Inland Revenue Board (LHDN) also failed to take action to prevent the taxpayers, involved in 802 cases of tax evasion with tax arrears of over RM25 million, from leaving the country.

AG’s recommendation
LHDN should look into the above issues, and among other things, improve its monitoring mechanisms to be more systematic and thorough. Its data of eligible taxpayers in the system should be regularly updated, collection of tax arrears be done immediately and follow-up action be taken against taxpayers who often deliberately and repeatedly do not comply.

The spotlight was on the Customs Department in the third series of the AG report, as technical errors in completely built up (CBU) vehicles assessment left almost RM15 million in taxes uncollected.

The Malaysian Association of Malay Vehicle Importers and Traders (Pekema) was found fail to apply for time extension to keep their unsold imported vehicles more than 36 months without being taxed.

Estimated duty from those unsold imported vehicles came up to RM12.65 million, as at December 31, 2014, which makes up the bulk of the uncollected taxes amount. Other issues found include:

AG’s recommendation
The Customs’ Warehouse Management and Control Unit to step up enforcement over unpaid/tax vehicles in licensed warehouses, and to only accept quality Custom Declaration forms with sufficient details on vehicle information and registration date.

The Ministry of Defence (MinDef) was tasked to oversee the National Defence Education Centre (NDEC) development project, which consists of the Malaysian Armed Forces Staff College (MAFSC) and the Malaysia Armed Forces Defence College (MAFDC). These two colleges aim to provide the requisite training facilities for three military services (Air Force/Navy/Army) to the highest level in the military field.

However, the AG report found the management of NDEC less than satisfactory due to the following weaknesses:

AG’s recommendation
MinDef are recommended to ensure projects can be completed on time and Government do not incur any losses by appointing only qualified and capable contractors and improving on monitoring activities throughout the project implementation. This will also avoid non-compliance to contract specifications issues. It is also suggested that MinDef should ensure proper administration of contracts to protect the Government interest.

5. East Coast not given priority in flood mitigation projects

Under the Tenth Malaysia Plan, the Flood Mitigation Projects (FMP) was implemented across Malaysia, which consist of river improvement works, construction of pump house and other related facilities, upgrading of pond detention, raising the river bund as well as land acquisition.

The audit carried out from December 2014 to April 2015 found that all audited projects were delayed, where one to six Extension of Time (EOT) were approved, due to delays in land acquisition, obstacles and problems on site, weather conditions, changes in design to adapt to current site condition and delays in connection of electricity.

Some of the components and works carried were also found not to comply with specification and do not meet quality standard.

Although, generally, the FMP has reduced the risk due to flood such as loss of human lives and property damages, states like Kelantan and Terengganu with the largest flood area and highest average losses caused by flood, were not given priority to the implementation of FMP.


AG’s recommendation
Department of Irrigation and Drainage Malaysia (DID) is recommended to manage and monitor FMP more effectively by supervising work progress of contractors to ensure timeliness, standard and quality. DID should also form Coordination committee among the Ministry of Natural Resource and Environment (NRE) to discuss problems relating to flood mitigation and regular maintenance of FMP components. Sufficient allocation should also be given to DID to maintain the implemented projects.

6. Low-income earners did not get the rice subsidy

Instead of benefitting its target group, the low-income Malaysians, the subsidised rice went to foreigners, restaurants and food stalls, and pets.

The programme, approved in 2008, started with the aim of covering the losses incurred by BERNAS (the nation’s sole rice distributor) to procure and distribute ST15% and S15% rice as well as to ensure targeted low income group are able to buy quality rice at controlled prices.

However, the audit, conducted between March and July 2015, found that 38 out of the 83 grocery shops did not have subsidised rice in stock because they did not receive enough supply to meet demand.

From the 86 consumers who responded, 54 were Malaysians, while the rest were those who were not eligible for subsidised rice, consisting of foreigners from Bangladesh, Nepal, Indonesia, Pakistan and Philippines, as well as restaurant operators who use the rice as pet food.

It was also found that quotas were given to wholesalers with expired licences, and wholesalers who failed to carry out wholesaling activities.

In response to the report, the Ministry of Agriculture and Agro-based Industry (MOA) announced that it had abolished the subsidy for the Super Tempatan 15% broken (ST15) grade rice in Nov 1, 2015, following too much leakage in the programme.

AG’s recommendation
Prior to its abolishment, the AG recommended that the ministry review the viability of this programme and evaluate the most effective mechanism to ensure only the target group benefit from the programme, such as collaborating with Department of Social Welfare; and also enough subsidised rice to ensure fair distribution.

Under the Property Management Division, the audit found some weaknesses in the management of quarters for civil servants.

There were 39 civil servants that were living rent-free in these quarters, where the rental was not deducted from their salary, costing the Government RM811,326. More than 600 tenants were identified as at April 2015 with rent arrears amounting to RM3.58 million due to tenant’s transfer, resignation and dismissal.

A total of 575 unoccupied units were also not promptly allocated after completion of maintenance work, and RM88,787 worth in rent arrears were incurred by tenants from Non-Governmental Organisations (NGOs).


AG’s recommendation
The division has been advised to review its current mechanism on quarters’ allocation to ensure vacant units are allocated swiftly, and also to quickly identify ineligible tenant. Other mechanisms to review are the housing allowances, regional housing allowance and cost of living allowance, to ensure salary deductions are done accurately.

Over the past few years, the Malaysian government has made some progress toward better management of its assets and also the taxpayers’ money, but as evidently shown in the latest AG report, more work needs to be done, and better transparency needs to be in place.

Rather than nit-picking on each of the above weaknesses highlighted by the AG, the government needs to look at the bigger picture and see how it can better implement effective mechanisms to ensure good activities that benefit the rakyat (such as the rice subsidy programme) can be better implemented. The sense of ownership in each programme needs to start from the individual implementing it in the grass roots.

Money mismanagement can happen to everyone. Keep track of your spending with the right credit card!