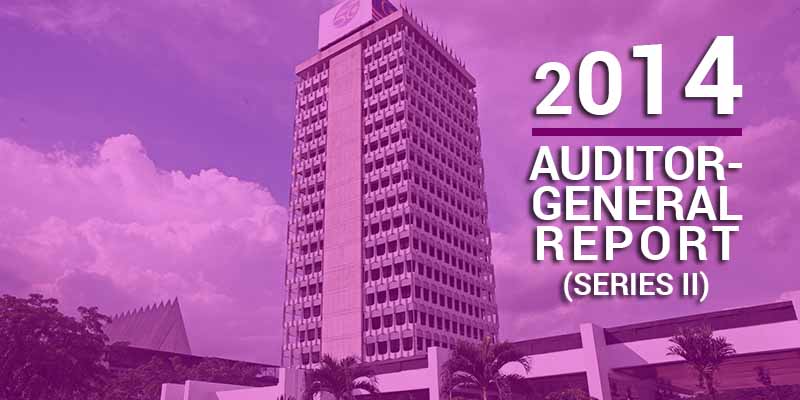 It has become a norm for the Auditor-General Report to point out the Government’s weaknesses that resulted in the loss of taxpayers’ money and also overall inefficiencies. With the publication of the second series of the 2014 report, it is no different.

This audit was done on various activities such as procurement, construction, infrastructure, maintenance and revenue management. In Series II of the 2014’s audit, observation was made on 16 programmes/activities/projects from 13 Federal Ministries/Departments and the management of three Government Companies.

Ninety recommendations were made by the Auditor-General (AG) to help the related parties and departments to take corrective actions and make the necessary improvements.

Let’s take a look at how the Government has fared in the second report of 2014:

The AG Report 2014 found the management of medical fee revenue in government hospitals being less than satisfactory. The RM82.98 million in arrears from 2012 to 2014 was made up of RM34.55 million owed by Malaysians, and RM48.43 million by foreigners.

The Ministry of Health said the deferred revenue from Malaysian patients was due to the patient’s inability to pay the deposit and settle the bill, or the patient being in an unconscious state and unaccompanied by next-of-kin to pay the hospital entry deposit.

Other reasons cited are inaccurate personal information provided by the patient, change of addresses resulting in returned reminder letters, and additional charges for lab work or procedures that were billed after the patient was discharged.

For foreign patients, the reasons for the overdue fee collection was the refusal to pay the medical bills by the patients’ employers, the use of old or false addresses, and even the use of another person’s identification card or passport when registering.

Recommendations made by the AG include a 24-hour registration counter to receive ward admittance deposits, e-payment options through debit and credit cards, and informing patients of deferred bills through phone calls, reminder letters and claim notices from the ministry’s legal department.

For foreigners who do not pay the deposit fee at government hospitals, and a bank guarantee agreement along with a Foreign Workers Health Insurance Protection Scheme with private companies will have to be established. Illegal foreigners will also be reported to the relevant authorities.

Most word processors come with spell checker. However, the Ministry of Education has come under fire when the latest AG report found that they spent RM6.6 million on a separate piece of spell checking software.

The ministry purchased 1,417 copies of the spell check software for 20 schools in Putrajaya, which includes 270 copies worth RM75,600 in excess from a company known as Brilliance Information Sdn Bhd.

The company was awarded a contract worth RM28.28 million to furnish computing technology to schools in the Federal Territories from 2012 to 2014.

In its defence, the ministry explained that it had initially ordered the same number of units of personal computers as the software. However, due to insufficient units from the supplier, the ministry changed the model to a more expensive model, but in fewer quantities.

This resulted in additional software purchased.

The sixth Entry Point Projects (EPP) under the National Key Economic Area (NKEA) for Agriculture was Replicating Integrated Zone For Aquaculture Model (IZAQ), started in 2011 and targeted to achieve its objective in the year 2020.

According to the report, from 2011 to 2014, 11 contracts had been signed between the Federal Government and 10 anchor companies involving 11 projects (shrimp/fish farm and hatchery center). The total project cost of IZAQ is RM2.142 billion and the approved public fund quantum is RM518.63 million.

The audit findings revealed that contract documents worth more than RM100 million were signed by government officer exceeding his authority. For future contracts, Department of Fisheries (DOF) should ensure the empowerment given to government officer in accordance with Contract Act 1949.

The report also found certain costs that should be borne by the company were instead being funded by Government.

Although the construction of NCI was completed earlier than scheduled, the audit found several weaknesses. Leakages in cooling tower tank, stagnant water on the road, nonstop triggering of alarm and tangled wires of ICT equipment, are some of the unsatisfactory or incomplete works found.

Isolation rooms also could not be utilised due to lack of adherence to the prescribed standards.

Public Works Department (PWD) was recommended by the AG to ensure payment made to contractors is as per the built drawing and is in accordance with work done.

These 4 instances highlighted are similar to the weaknesses brought up in previous reports. They all highlight the same general weaknesses: Lack of ownership and also abusing loopholes of set procedures. There could be an underlying issue for all these. Perhaps, there are too many red tapes that caused delay in execution and inefficiencies. Many corporate employees could probably relate to that.

However, when it involves hundreds of thousands, or even millions of Ringgit, that is not yours but the taxpayers’, then the best thing to do is to follow the Standard Operating Procedures set out.

Will real improvements be made? Or will more money continue to leak?

Want to know what the first Auditor-General Report 2014 found? Here are 8 times taxpayers’ money was mismanaged in the first report.