3 Things You May Not Know About The Rich

Rich people are generally good at making, having or keeping money. So if you aspire to join their ranks, it pays to learn more about them and what they do with their money.

Global consulting firm Capgemini publishes an annual World Wealth Report, and here are three key takeaways we found in the 2016 edition of the report, that you probably don’t know about rich people!

Last year, the Asia-Pacific region overtook North America as home to more high-net worth individuals (HNWIs) than anywhere else. According to the report, HNWIs are defined as people who have investable assets of more than US$1 million – “excluding primary residence, collectibles, consumables, and consumer durables”.

Asia-Pacific is home to 5.1 million HNWIs! That was up nearly 10% from the previous year.

No specific number was given for Malaysia in the 2016 report but the 2015 Asia Pacific Wealth Report noted there were 67,000 HNWIs in Malaysia.

2. They believe in diversification

Diversification is important for all investors. Spreading your money around different kinds of assets is one of the best things you can do to build, and preserve your wealth. Having too much in one asset class, like real estate, can lead to financial disaster.

The world’s richest people appear to know this, and have (on average) a broadly diversified portfolio. Based on the average asset allocation among these people, 24% of their assets are in cash, 25% in equities, 18% each in real estate and fixed income, and 16% in alternative investments (including hedge funds, commodities and private equity).

In Asia-Pacific, HNWIs are notably more conservative. For example, rich people in Japan have 37% of their assets in cash, and significantly less in real estate and fixed income. In 2014, Malaysia’s HNWIs held 25% cash and 23% in real estate, while equities only made up 19% of their portfolios.

3. There are a lot of rich people in Singapore and Hong Kong, relatively speaking

Malaysia, by comparison, has relatively fewer HNWIs. Based on 2014’s figures, Malaysia’s 67,000 HNWIs account for only 0.22% of the population. 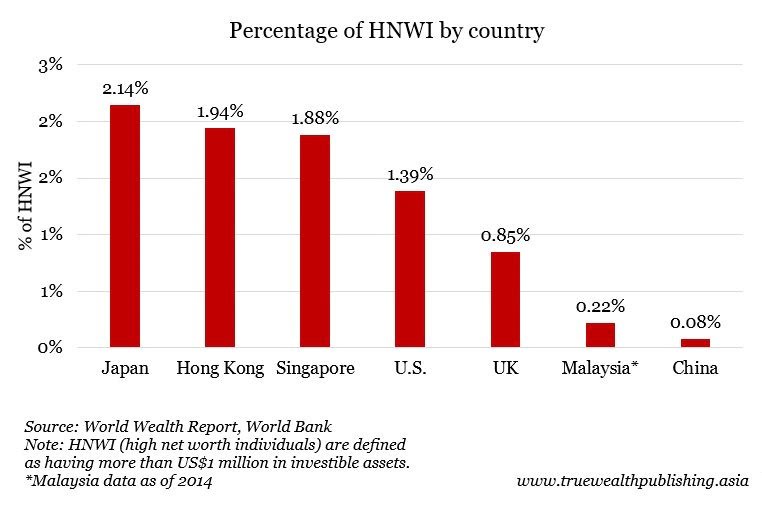 As a percentage of the population, there are more rich people in Hong Kong and Singapore than the U.S., UK and China. For Asian countries, only Japan has a higher relative amount of HNWI.

Regardless of geography, the world’s 16 million HNWIs have one other thing in common. They all like money and aren’t ashamed of it… and they’re are not going to be around forever.

In the Asia-Pacific region, the report estimates that over the next 15 years, around 80% of all HNWI wealth (which equals about US$17 trillion) will be transferred to the next generation. That’s a lot of money changing hands – and a lot of younger people making big financial decisions. How they decide to invest their money will be one of the biggest factors shaping markets in coming years.