Home › Latest Articles › Lifestyle › The Economics of Sharks: Why They’re Worth More Alive Than Dead

The Economics of Sharks: Why They’re Worth More Alive Than Dead

Sharks often get a nasty reputation for being dangerous and deadly (thanks to the famous 1975 movie, Jaws), but in reality, humans have done more harm to sharks than they ever have and ever will to us.

We are hunting them to extinction, for one. According to wildaid.org, an estimated 100 million sharks are killed every year, with fins from up to 73 million used for shark fin soup! These are primarily supplied to the market in mainland China.

One reason why these rampant killings continue is because shark fins can fetch a lot of money. A pair of shark fins can sell for as much as US$700 per kg (RM2,736) in Asia.

But it is the restaurant owners who are getting the biggest slice of these shark fin earnings. Shark fin soup has long been a popular entrée in Chinese restaurants due to its association with prestige and privilege in Asian cultures. It continues to be served at banquets and in weddings.

A 2013 report by National Geographic revealed that a bowl of shark fin soup can sell for as much as US$100 (RM390) at an upscale restaurant!

The economics of sharks

While demand for shark fins continue to result in the slaughter of tens of millions of sharks every year, a 2013 study finds that sharks are worth more in the world’s oceans than they are on restaurant’s menus.

The study, published in Oryx – The International Journal of Conservation suggests that sharks that are free to roam in their natural habitats make up a valuable and sustainable part of tourism around the world.

As part of the study, the research team from the University of British Columbia (UBC), the University of Hawaii and Universidad Autónoma de Baja California Sur in Mexico compiled data from 70 sites in 45 countries to compare how much money is generated every year by fisheries that fuel the global shark fin trade, and how much is generated by ecotourism, which encompasses all forms of shark-watching activities. Below are their findings: 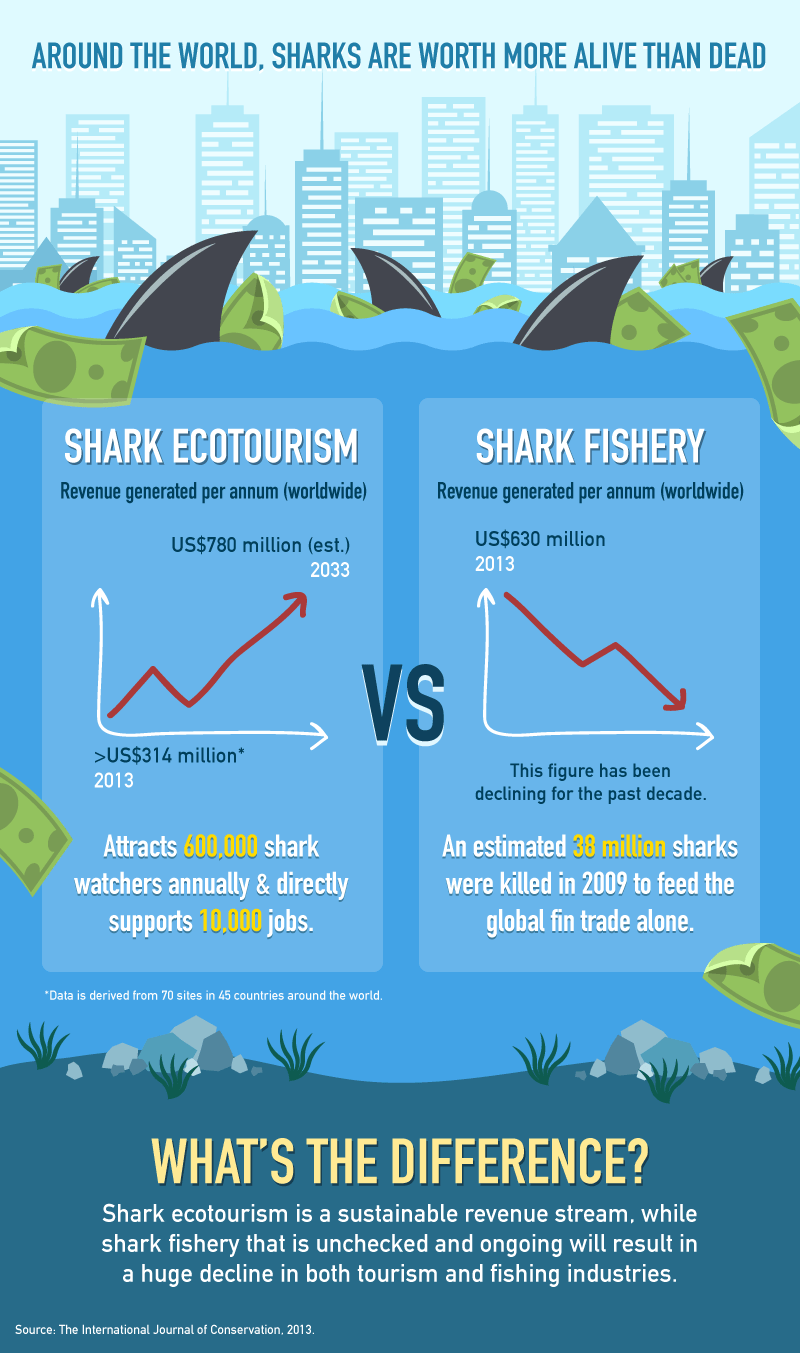 The shark tourism industry can also potentially contribute to the creation of thousands of jobs around the world, as Andres Cisneros-Montemayor, a PhD candidate with UBC’s Fisheries Economics Research Unit and lead author of the study notes.

“The emerging shark tourism industry attracts nearly 600,000 shark watchers annually, directly supporting 10,000 jobs,” he said. “It is abundantly clear that leaving sharks in the ocean is worth much more than putting them on the menu.”The shark tourism industry can also potentially contribute to the creation of thousands of jobs around the world, as Andres Cisneros-Montemayor, a PhD candidate with UBC’s Fisheries Economics Research Unit and lead author of the study notes.

Surges in shark tourism are particularly evident in the Caribbean and Australia, the researchers said.

Meanwhile, a study by the Australian Institute of Marine Science and the University of Western Australia cited that shark diving generates approximately US$5.4 million (RM21.13 million) every year in French Polynesia, while in Palau, Micronesia, the industry generates US$18 million (RM70.42) a year, accounting for 8% of the country’s Gross Domestic Product (GDP).

The study, entitled The Economics of Shark Diving in the Semporna Region, Malaysia also noted that shark-diving has been a significant contributor to the local economy. They found that as a whole, diving has contributed US$34 million in business revenue to the Semporna region in Sabah in 2011. Of this total, 26% or US$7.8 million was directly attributed to shark diving.

What is Malaysia doing to curb this?

Unfortunately, the high demand for shark fin and meat in Malaysia is still leading to high volumes of sharks being caught in the country.

A 2015 study by the World Wide Fund for Nature – Malaysia (WWF-Malaysia) showed that consumption of shark fin soup is still strongly tied to gatherings and celebrations such as weddings (85%) in Malaysia.

The survey, entitled, Asian City Shark Fin Consumer, also revealed that shark fin soup consumers are most likely to be of Chinese ethnicity (76%) living in Kuala Lumpur or Petaling Jaya (91%).

The good news is, consumption of shark fin soup has decreased in the past six months (44% decline) and 56% expect to decrease consumption in the next 12 months. Consumption is also relatively infrequent, on average twice a year, with two bowls consumed in total.

However, the WWF-Malaysia study also found that although the majority (57%) believe that it would be acceptable to replace shark fin soup with alternatives at celebratory events, for 43%, the sense of tradition outweighs environmental concerns for the time-being.

With all of that being said, there are currently still no catch quotas for catching sharks in Malaysian waters.

Under the International Trade in Endangered Species Act 2008, Malaysia also protects sharks for trade, though it does not address the issue of shark finning and hunting.

There was even a proposition to amend the Fisheries Act to give force to setting up a shark sanctuary zone in Semporna and other shark populated areas in Sabah.

However, this was brought to a halt in 2015 when Agriculture and Agro-based Industry Minister, Ahmad Shabery Cheek, said that the ban of shark finning was “unnecessary” as the finning industry does not exist in Malaysia.

He went on further to say “Sharks are normally caught by accident when they enter the fish nets along with the other fishes.”

Marine conservationists have refuted this and continue to fight for a ban in shark fishing in the country.

What happens if the killing does not stop?

They will go extinct, it is that simple. And this isn’t some dark figment of one’s morbid imagination – it is happening here and it’s happening now.

Due to overexploitation and the lack of proper management, some shark populations have declined by up to 98% in the last two decades. Nearly one third of pelagic sharks species are considered threatened by the international Union for the Conservation of Nature, according to National Geographic.

Shark populations take a long time to recover and they can take over seven years to reach maturity. Also, sharks only raise one or two pups in a year.

According to seashephard.org, a study in the United States indicates that the elimination of sharks resulted in the destruction of the shellfish industry in waters off the mid-Atlantic states, due to the unchecked population growth of cow-nose rays, whose mainstay is scallops.

Other studies in Belize showed reef systems falling into extreme decline when the sharks have been overfished, destroying an entire ecosystem.

While no one knows for sure what will happen globally if shark populations are destroyed, one should be mindful of the results.

Over 250 million years ago, planet earth suffered the largest mass extinction on record and scientists believe that this was caused in part by catastrophic changes in the ocean. Sharks are vital to the marine ecosystem and play a key role in ensuring the ocean’s health and equilibrium so we do not reach that point again.

What can we do about it?

You don’t have to be on the front lines to start saving sharks. As a consumer, you can play your part by refusing to consume or to purchase shark. And it’s just not for the sharks’ health – it’s for yours too. Shark meat (including fins) carries warnings due to its high mercury levels from the U.S. Food and Drug Administration, the Environmental Protection Agency, the Environmental Defense Fund, and the World Health Organization.

High exposures to elemental mercury can cause kidney malfunction, respiratory failure, and even death (sounds yummy?).

You may also stop supporting restaurants or stores that sell sharks or shark products and inform them of your concerns to give them a chance to do the right thing by publicly denouncing the sale of shark products.

Several leading restaurants and hotel chains in Kuala Lumpur have already pledged their support for the “No shark fins policy” and no longer feature shark fin soup in their menus. Among them are the Shangri-La chain of hotels, the Hyatt chain and the Hilton hotel chain.

Finally, always report to property authorities if you witness any maligning or abuse of this valuable creature.

Strength comes in numbers. By each playing our part, we might just be able to reverse the imminent mass extinction of sharks – one step at a time.

Start protecting sharks by taking the Break the Soup Bowl challenge by WWF-Malaysia.