Breadwinner Blues: Life On A Single Salary In The Klang Valley

Despite the positive outlook on Malaysia’s economy, no one’s feeling particularly positive about their current state of finances. Malaysians have been feeling the pinch as the cost of living continues to rise, and despite growth in income, it is still not catching up fast enough to counter the effects of high living cost.

The findings on Malaysians’ household expenditures in 2016, which was released earlier this month by the Department of Statistics Malaysia (DOSM), show where Malaysian families are spending their money. The top three expenses for an average household are housing and utilities (24%), food and beverages (18%) and transportation (13.7%). While this survey gives a good idea on how much Malaysians are spending in general, but how much a family allocate for each of these spending categories depend on their income range.

The rising cost of living hits single income families the hardest, as they need to stretch their income for the entire household, with no backup income.

With Budget 2018 about to be announced, we share the stories of sole breadwinners from different income ranges and what they hope to see in the upcoming Budget. 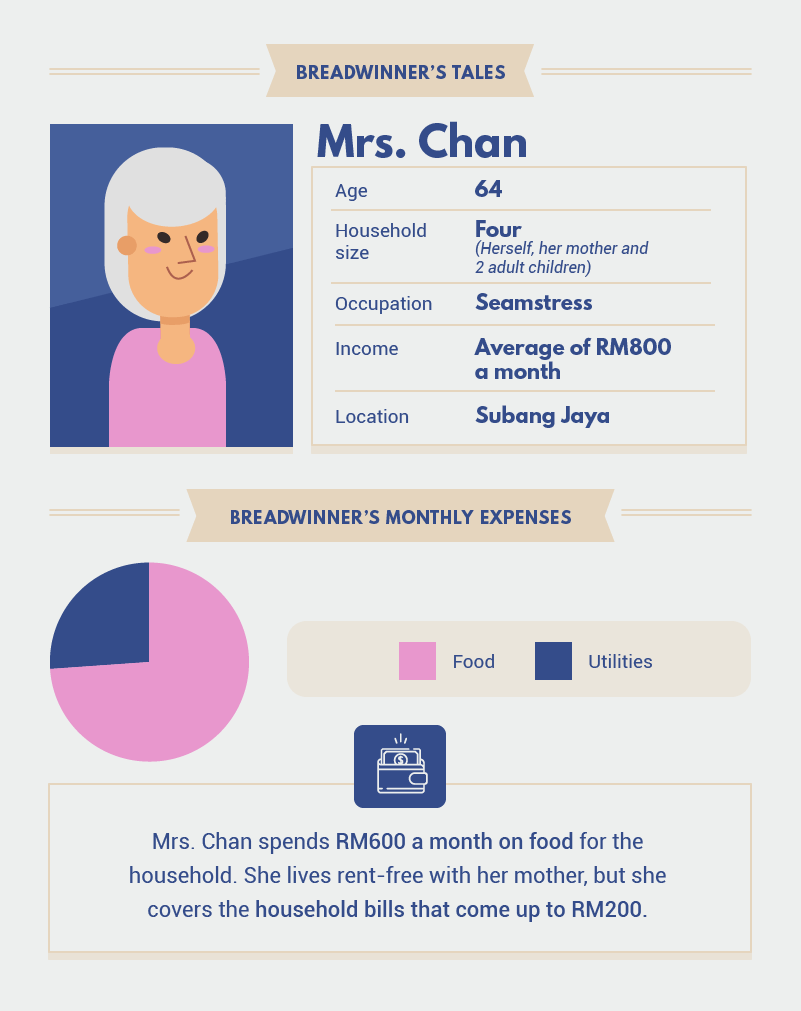 Chan became the sole breadwinner of her family when her husband was unable to maintain his job as a car salesman. Realising there was no stable income to support her family, she took it into her hands to raise her three children on her own. She started working as a seamstress and also took on babysitting jobs on the side to provide for her family’s daily needs, especially her children’s education.

Today, her three children are grown up with two of them still living with her. She lives with her mother, who has already paid for the house they’re living in, so Chan and her children can live rent-free. However, she pays for groceries, as well as the utility bills for the household.

She earns an average of RM800 a month, but her income can go up to RM3,000 on peak period such as months leading up to major festivals. However, she tries to maintain her expenses to below RM800, so she can spread her income on months that she earns less.

With the average income of RM800, she spends a whopping 75% on food and other household items for a household of four adults. This only leaves her RM200 on utility bills. Sometimes, she spends another RM200 on materials for her work as a seamstress, but this is only during peak months.

Thankfully, she has some savings in terms of investment in the stock market and EPF savings, which she has withdrawn and put aside. But she hopes that nothing serious will happen that will require her to take it out. Even if she falls ill, she goes to the government hospital for treatment, so she can do without medical insurance. To further reduce her expenses, she walks to the grocery store, rather than taking a taxi or other transportation.

She considers herself one of the lucky few among the low income earners as she always manages to cope financially, somehow.

“I don’t have a need to spend on entertainment or even on myself. My focus has always been on my children and I always did what I could to provide for them.”

She also attributed her financial survival to staying with her relatives to cut down on her expenses.

“If I had to pay rent, I definitely would not be able to afford a lot of basic things,” she explained. “Neither can I look into staying here in Subang Jaya either. The rent here is too high.

“Other people in my income range are not as lucky,” she said. This is why even when she could get BR1M, she won’t get it as she believes other people need it more.

For Chan, she hopes that Budget 2018 will bring back subsidies.

“Groceries are so expensive these days! The removal of subsidies and GST have contributed to a significant increase in food prices and I’m now struggling to afford basic food items, especially vegetables.” VMT’s life changed when her husband had a heart attack in 2011, then lost his business in 2012. Due to his health, he was unable to get a job since then and unfortunately, passed away this year. It has been a harrowing experience for her and her only son. But VMT has been the breadwinner of her family, and remains strong in providing for her son and herself.

From mortgage to her son’s education, VMT manages her family’s finances single-handedly. She’s able to keep track of all of her expenses with the help of auto payments that help her pay her bills on time.

While she does have some savings, most of it was spent on unexpected expenses that have been popping up since her husband’s death, but she does her best to provide for her son, who is currently home-schooled. His education and other expenses costs around RM1,000 every month.

She’s currently dealing with some debts, including credit card debt, which she’s doing her best to lower by keeping up with monthly payments. She has checked her credit score and it yo-yos from good to bad.

“I hope that the government looks into the welfare of single parents like me by offering more scholarships, allowances or tax rebates,” said VMT.

“But more than anything else, I hope the government opens their eyes and realises that we are suffering today – and rather than pump money into unnecessary areas, look into providing better perks for its people.” 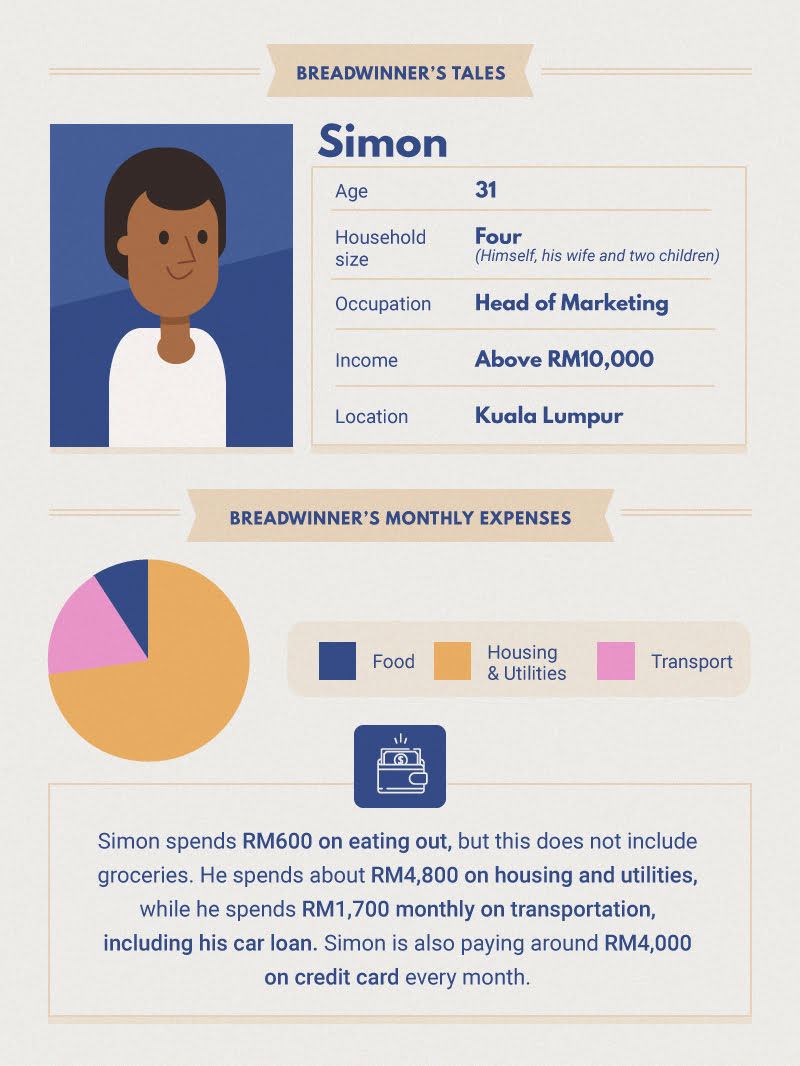 For Simon, being the sole breadwinner made more sense for his family.

“It’s too difficult to have both of us working,” he said. “It also doesn’t make financial sense to pay for a maid which can cost up to RM30,000 a year. My wife will need to earn more than three times to make it worthwhile.”

As the sole breadwinner of the family, he pays RM300 per month on his children, and with insurance that’s an extra RM300 for each child. He and his family mostly eat out, which costs RM600 per month. For transport in general he spends RM300, but he also has to pay for his car loan at RM1,400 monthly. His utility bills go up to RM800, and with his house loan costing RM4,000 per month, he spends the most on this category.

He has also invested in a few properties, but the returns have been terrible so far.

“I’ve been unable to sell one property in the past year. Even if I did sell it, the returns would only be about 5% p.a. at most.”

His other debts include having to pay RM4,000 for his credit card monthly. To deal with this large debt, he handles it by ensuring the overall fixed debt that he has doesn’t exceed 30% of his income and his credit card debt needs to be managed tightly. He also makes sure that his debt never exceeds 80% of his monthly income. His biggest financial fear is not having enough for retirement and buffer cash in case he loses his job.

With regards to Budget 2018, Simon laments that things are not looking good. “GST continues to hurt us. It won’t be increased but it sure won’t be decreased. I don’t expect any reductions in income tax due to the government’s drive to squeeze more tax revenue. I’m not hopeful for anything that will make life easier. I can only pray they don’t introduce anything that hurts more.”

Is there a positive outlook for breadwinners?

In today’s economy, having dual income may be the best solution to handle the rising cost, but it isn’t always possible or feasible for everyone. Breadwinners have small options to look out for to help them deal with this, such as BR1M, but this is mainly for the B40 group.

For those in the M40, the struggle is real when it comes to dealing with the skyrocketing living cost. There aren’t many perks to help them make their lives better.

For parents, will they anticipate more reliefs that’s better than last year? Will the cost of living be stable enough to help them keep up with the rising cost of living?

We will find out soon.