Home › Latest Articles › Lifestyle › Netflix: Is It Really Worth The Money For Malaysians? Netflix: Is It Really Worth The Money For Malaysians?

So, Netflix has finally arrived in Malaysia, and 129 other countries yesterday. It was extremely exciting for most – this writer included. But being a #kiasu Malaysian, I had to take a step back and seriously consider if paying RM42 (the standard package) every month is worth my money, or would I be better off with other options?

It would be impossible to just look at it from the cost point of view, as entertainment preference differs for different people. As iMoney has always advocated value, instead of just being frugal, it’s okay to spend if you are getting the best value for your money.

Now, let’s dissect Netflix Malaysian from the value point of view – does it offer you with the best value for every Ringgit you spend?

If you are a certified couch potato, and your family is too, then getting a subscription that gives you a huge selection of movies and TV shows will definitely be worth it, but the question is, should you be plonking your money at Netflix?

Before you say goodbye to your friends and family, call in sick to work, stock up enough chips and cup noodles to feed a small village, here are a few things you must consider before signing up for Netflix.

Netflix price list in different countries for the standard package

At first glance at the packages offered by Netflix in Malaysia, it does look extremely affordable, especially compared to satellite or IPTV in Malaysia. 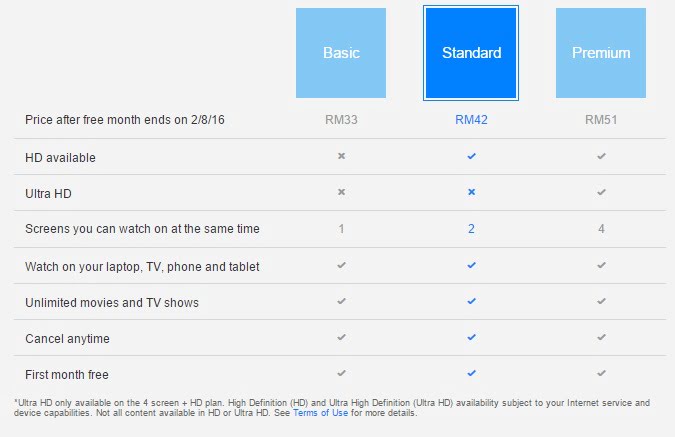 If your New Year’s resolution for 2016 is to watch more TV, subscribing to Netflix is better than getting a gym membership because there’s… NO.CONTRACT.

In the very unlikely event that this resolution doesn’t work out for you by March, you can simply cancel it, unlike that gym membership that you’ve signed up for a year (just saying).

However, do consider the cost of subscribing to an adequate broadband package (more about this later) if you don’t have one, or have one that is inadequate to support your new full-time hobby.

Do bear in mind that subscribing to Netflix will also incur additional costs such as credit card overseas transaction costs. This is why it’s important for you to read the terms and conditions of your credit card carefully, to be aware of all the charges you may incur when you use your card to pay for something online. 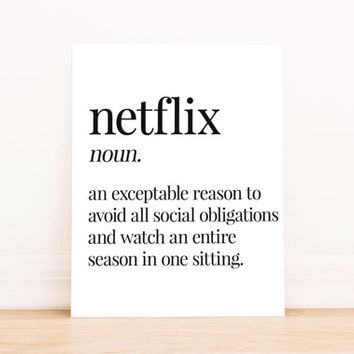 Home décor idea to spruce up your home since now you will be home indefinitely.
Image from Wanelo.

Wait… Before you imagine yourself on the couch/bed/*insert an area in your home* binge-watching Orange is the New Black on Netflix, find out if you will be getting the same deal as the US subscribers.

The answer is no.

The US version still has the best selection of TV series, but it’s missing the prequel to Breaking Bad, Better Call Saul (Malaysia has it!). Unfortunately we don’t get a lot of the Korean and Japanese anime and TV series, which is quite weird since many Malaysians are big fans of those, and also American shows like The Flash, Agents of Shield, Friends and New Girl.

However, we do get movies like Batman Begins, Man of Steel, Clockwork Orange and Catch Me If You Can, but the US doesn’t right now.

Well, we really shouldn’t just compare the content between US Netflix and Malaysia Netflix. Let’s compare it to something that we are all familiar with – Astro On the Go and iflix.

The biggest plus point of Astro On the Go now is the local and Asian content that we can get. They’ve been in Malaysia for years, and undoubtedly know what we like and what we don’t like, unlike new players like iflix and Netflix. 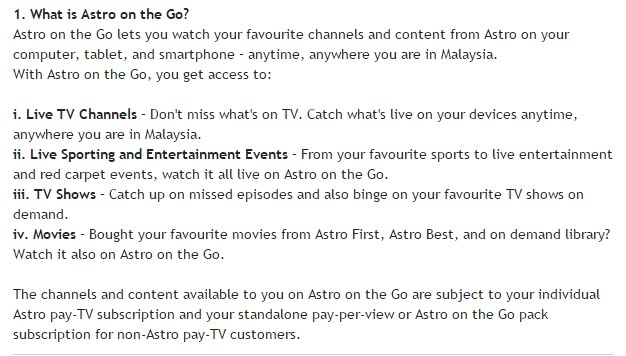 If you are hooked to binge-watching Hong Kong/Taiwanese/Korean/Japanese TV series, I don’t think you would be giving up your Astro subscription just yet. But it’s also undeniable that Astro subscription (that is worth subscribing to) can really put a dent in your wallet. At the moment, Astro On the Go is only worth your while if you are subscribed to Astro pay-TV (satellite or IPTV).

The cheapest Astro package offered is RM42.35 a month with 41 channels, which does not include staples like HBO, Star World, Fox Movies or any of the sports channels that brings you live football matches.

You won’t get these on Netflix – for now anyway.
Images from iflix

iflix, on the hand, is more similar to Netflix where all the content are not categorised by channels, but more by genres and they have Korean, Tamil and Chinese! For the channel surfers, this may take a while to get used to. iflix content is curated with the Asian audience in mind, as you can see from the screenshots above. So it’s a better option if these are the shows you’re interested in. Also, iflix is cheaper by quite a bit compared to Netflix, at RM10 per month without contract.

When it comes to value for money, of course paying for something that you will use and enjoy all the time is worth more than paying for a subscription that offers hundreds of movies and TV shows that do not pique your interest.

The potential is definitely greater with Netflix as they have their own original content that will not be restricted with licensing and distribution rights. Some of the Netflix productions are House Of Cards, Arrested Development, and Orange Is The New Black to name a few. This vastly adds to the appeal of the service.

To get the most out of Netflix, you’ll need a good Internet service. It’s broadband or nothing if you want a buffer-free experience.

Usage limits will be reached quickly, and the quality of the video will drop with low bandwidth and buffering a video is really 1990s. Here are the speeds Netflix recommends.

If you are a heavy user (lots of Youtubing and Netflixing) and sharing a home with three to four other people, here are some plans that will satisfy your needs:

If you are subscribed to Streamyx 1Mbps, you will probably need to upgrade your broadband to enjoy a better Netflix (or any Internet TV) experience for the whole family. Try out our Broadband Smart Search to find which broadband services are available at your area and how much they cost!

Remember, higher quality video uses more bandwidth than lower quality video. To save on your bandwidth using Netflix, you can change your video quality settings under Playback Settings, from Auto (default) to Medium or Low. 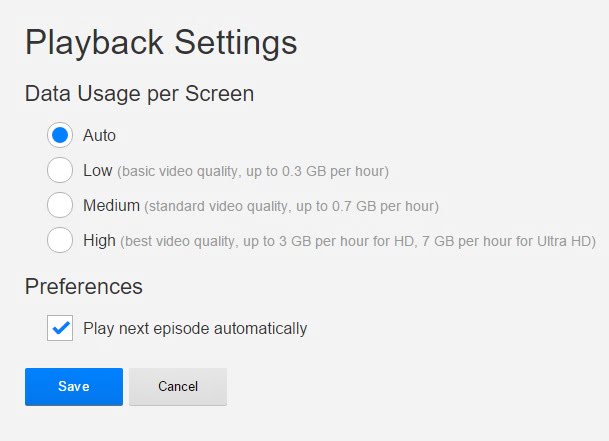 Managing your bandwidth usage is easy on Netflix
Image from Netflix

Here’s a short summary of what Netflix offers compared to Astro On the Go and iflix:

Comparison of Netflix, iflix and Astro On the Go

If you hate commercials interrupting your precious screen time, then Internet TV is definitely the way to go, but looks like those who prefer Asian video content should hold their horses on Netflix.

Plus, if you like to catch your TV shows (even when there’s no WiFi available), iflix and Astro On the Go allows you to download your favourite TV content on your devices to be viewed at anytime.

A movie and TV show junkie would probably be getting value for their money by subscribing to Netflix, with bigger library of content anytime and anywhere you want it. So, if you are pretty set on Netflix, the question now is, should you subscribe the Malaysian packages, or should you continue with the US packages on VPN/proxy?

For the uninitiated, Netflix used to be only available in selected countries, namely the US, the UK and Ireland, and countries in the Europe. If you were not in any of these countries, you wouldn’t be able to subscribe to Netflix the usual way, but it is not impossible. Netflix, and many other US websites, use geo-blocking to determine where you are from, through your IP address.

You need a geo-unblocking or VPN service to get around the geo-blocking. It’s all pretty technical in terms of how they work but essentially it tricks Netflix into thinking you’re accessing it from within the US.

VPN service can cost about US$14.95 (RM65.45) for three months subscription, while geo-unblocking services like Getflix only charges US$3.95 (RM17.30) a month or US$10.67 (RM46.71) for three months. The longer the contract you sign up for, the cheaper the pricing goes. Of course, VPN services have added uses outside of Netflix. If you just want to access Netflix, services like Getflix are enough.

Now, why would you want to pay more and go through so much trouble when Netflix is already available for you in Malaysia? Well, if you want the exact movies and shows available in the US, then it makes sense to pay slightly more, but if you can live without Parks and Recreation, Naruto or Breaking Bad, to name a few, then just pay RM33, RM42, or even RM51, and subscribe it locally.

On the other hand, if you’re into a more Asian selection and don’t want to deal with all the complexity that is region blocking with Netflix, just go with iflix. It’s also a lot cheaper.

Which one you go with really depends on what shows you’re looking for and whether HD matters to you or not right now (iflix presently doesn’t offer HD). Of course from a price point of view, iflix is much better but if you can’t find anything you like on it then there’s not much value there. But it’s a pretty good time for us now as we’re FINALLY spoilt for choice when it comes to TV.


Update: January 15, 2016
Netflix announced today that they will be using a new technology to detect different extensions and proxies being used by subscribers in order to shut them down effectively.
Subscribe to Netflix without worry by paying with the right credit card. Find the right credit card here.