Home › Latest Articles › Sponsored › How Does Islamic Banking Really Work To The Real Economy Of Malaysia? How Does Islamic Banking Really Work To The Real Economy Of Malaysia?

Living in Malaysia, Islamic banking is a very ubiquitous term we see everywhere, especially within our financial institutions. There are Islamic financing, Islamic credit cards, Islamic investing, among others.

But even with just how commonplace Islamic banking and the facilities they offer is, there are still a lot of misunderstandings and confusion regarding Islamic banking.

That means funds under Islamic banking assets now represent over one third of Malaysia’s banking sector assets. Clearly, Islamic banking is growing at a rapid pace and similarly, its impact on the Malaysian economy is even more significant.

What is Islamic banking?

In an article written by Muhammad Ali Jinnah, a Shariah Committee member of Maybank Islamic Berhad, he said Islamic banks’ objective is to establish a just social order in which the material and spiritual aspects are welded together.

In Islamic banking, values that are important in Islam, such as honesty, transparency and others are stressed upon, while also rejecting any practice that goes against the Shariah, such as riba (usury), gharar (uncertainty), and maysir (gambling).

The latest journey of Islamic banking is working on Islamic social finance from zakat, waqf and sadaqah funds where through this scheme, the facilities granted will impose lower profit and is more customer centric compared to normal financing.

This, according to Muhammad Ali Jinnah, will give underserved segments more opportunity to apply for the facilities and cater to their financial needs.

What role does Islamic banking play in our economy

Due to the importance placed in Islam towards universal values such as justice, fairness, and honesty among others, Islamic banking helps protect the consumers from dealings that are unfair for them, thus protecting their ability to be a part of the Islamic banking ecosystem.

As it is also mentioned in Islam’s holy book, the Qur’an states  that a certain proportion of one’s wealth should be funnelled back to the community, Islamic banks also work toward this particular goal by establishing zakat, waqf and saddaqah funds.

Through these funds, Islamic banks are on their journey to work on Islamic social finance where from such schemes, the facilities granted  will impose lower profit rates  when compared to interest rates imposed in conventional loans. This in turn, offers more opportunity for the underprivileged segment of society to apply for these financing facilities to cater to their specific financial needs.

While the advantages and benefits of Islamic banking for the consumers are clear, its  role in bringing  impact to the  Islamic economy ecosystem as well as the overall economy of our country, is of no less significant

Key facts on how Islamic banking impacts the economy

In summary, Islamic banking financing and deposit has a positive and robust influence on the Malaysian economy. In a recent study published by Emerald Insight, it was found that for every 1% change in total financing, the Malaysian real economy will see a 0.067% increase.

Another aspect of Islamic banking that should not be understated is the impact it has on the larger Malaysian community. This is because Islamic bank’s deposit are used to finance personal consumer products, investments and businesses, especially among small and medium enterprises, which will have a significant impact on Malaysia’s GDP.

Here’s how Islamic banking plays a vital role in the real economy: 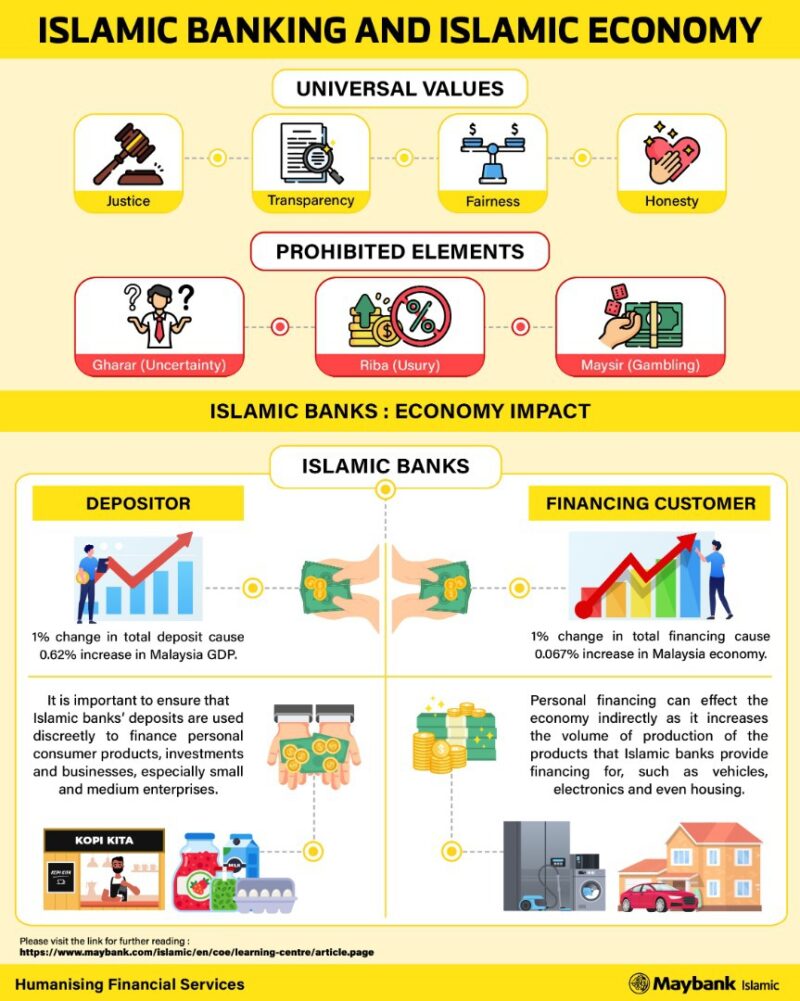 Muhammad Ali Jinnah also pointed out in his paper that although economists are still debating on the definition of real economy and how the banking sector has an impact to the real economy, it is clear that Islamic banks play an important role as a financial intermediary in the real economy.

“Islamic banks must continuously lead the Islamic finance industry to bridge the gap with other Islamic sectors including halal industry, financial planning and Islamic social sectors such as zakat, waqf and sadaqah.

“In a nutshell, real economic sectors require participation and support from all economic agents of individuals/households, firms, government and with support from the financial intermediaries,” Muhammad Ali highlighted in his article.

It is clear that Islamic banking has become an integral part of Malaysia’s economy and financial ecosystem, and it’s safe to say that it will continue to grow by leaps and bounds in the near future and strengthen Malaysia’s role in the global Islamic banking landscape.

The original article can be read here.