New Year’s Eve (NYE) is one of the largest celebrations around the world, where people get together to eat, drink, dance and be merry, and watch or light up fireworks to mark the coming of a brand new year.

Malaysians are no exception, with many already busy making plans to ring in the holiday season. While merry-making and social gatherings might be good for the soul, the same cannot be said for one’s holiday budget, especially in light of rising inflation rates and subsidy removals on the local front.

To give you an idea of how much your NYE expenses has gone up over the years, here is a comparison of the cost of celebrating NYE in Malaysia five years ago and now.

We are a nation of food lovers, and wining and dining make up an integral part of our festivities. Many Malaysians look forward to ushering in the New Year with sumptuous dinners with family and friends.

Those planning to dine out this year will need to fork out considerably more than what they would have to pay some five years ago. Price comparisons between some popular buffet destinations showed that some of these NYE packages have increased by at least 7% to 30%. 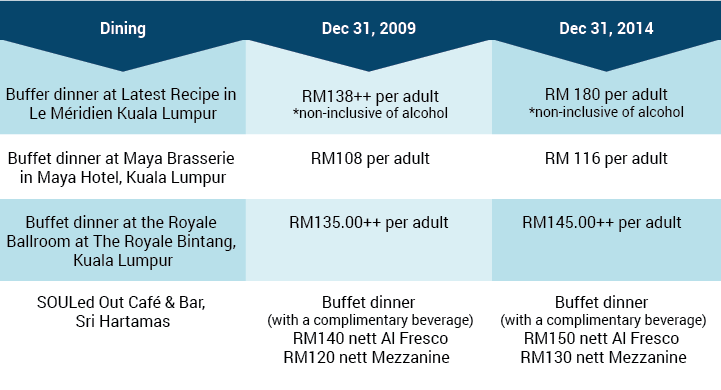 Simply put, RM100 today wouldn’t put as much food on your table as it would have five years ago. You can however, make the most of your Ringgit and max out on your gastronomical adventures with dining credit cards that gives you discounts and cash back privileges while you indulge.

NYE revelry often involves a jolly pint. Or five. The bad news is, Malaysia currently has the second highest excise duty for alcoholic drinks in the world, right after Norway, and is the highest in Asia Pacific.

Malaysian brewers are currently subject to three types of taxes – excise tax (RM7.40 per litre on beverage volume), a 15% value added tax, and 5% of sales tax.

What this really means is, about half of what you are paying for a bottle of imported beer, which costs an average of RM11 in supermarkets for example, goes to these taxes. The same beers could cost up to RM25 in neighbourhood pubs and bars.

While there has been no notable increase in alcohol excise duty in recent years, entrance and service charges of popular clubs and watering holes in the Klang Valley have certainly gone up. Take Zouk Club, Kuala Lumpur, one of the most notable clubbing spots in Kuala Lumpur, for instance. Entrance fees for both male and female have both gone up by RM10 over the last five years – that’s a 35.7% and 26.3% price hike respectively.

Meanwhile, “bottle entry” (for five people) at clubs in general can range from RM350 to RM400. These charges will no doubt increase on special occasions like Christmas and NYE. If you love parties, you can spread the New Year cheer without spreading your budget too thinly with the Citibank Clear credit card, which gives you up to 15% discount on purchase of hard liquor in Zouk KL.

Under the managed float system, which came into effect on December 1, prices of RON95 and diesel are now based on the monthly average world price of crude oil.

Prior to this, fuel prices in Malaysia was determined by the Automatic Price Mechanism (APM), under which the difference between retail and actual fuel prices were borne by subsidies and sales tax exemptions.

The removal of fuel subsidy means that Malaysians will now have to pay to the market price of fuel. While the price of RON95 has gone down 4 sen from RM2.30 to RM2.26 per litre in December, the cost of fuel has risen quite dramatically over the past five years, especially for diesel.

The perennial traffic congestion on our highways have been known to peak during festivities, so if you’re driving around at this time of the year, be prepared to increase your petrol budget for the week as you could be stuck in the parking lot or on the road for hours pre and post partying.

The right petrol credit cards can give you some cashback rewards and gifts for your trouble on the road. Also, find out how you can save up to 10 tanks of petrol in a year with this petrol quiz.

Bloomberg reports that the depreciation is a ripple effect and “reflection of the absolute collapse in oil”. Because oil is one of Malaysia’s main exports, the declining price of crude oil of 38% from its June high is affecting our currency.

The declining value of the Ringgit means that Malaysians will now have to fork out more to make up for the higher exchange rate, such as in countries like Singapore and Australia.

The higher exchange rate means that a S$6.25 order of Turkey Bacon and Cheese Quarter Pounder in a McDonald’s in Singapore will now cost you RM16.68 instead of RM15 just a month ago. Elsewhere, a Quarter Pounder with Cheese that costs A$3.79 in Australia will set you back by RM10.95 compared to RM10.53 earlier in the year.

Don’t despair just yet. The avid traveler can still stand to redeem some goodies with the right travel credit cards that offer cash back benefits or free air miles.

The advent of a new year always comes with mixture of joy and uncertainty. Malaysians are especially apprehensive this time around, partly due to the impending Goods and Services Tax (GST) that lurks just around the corner.

Adequate financial planning can save you a lot of trouble and ensure that you stay out of the red. New Year brings new hope, as well as fresh opportunities to grow your money and kick-start your financial goals.

If you’ve been hoping to boost your financial portfolio and start investing, there is never a better time than now. Embarking on the right decisions will keep you on a fuss-free and profitable financial track all year long.