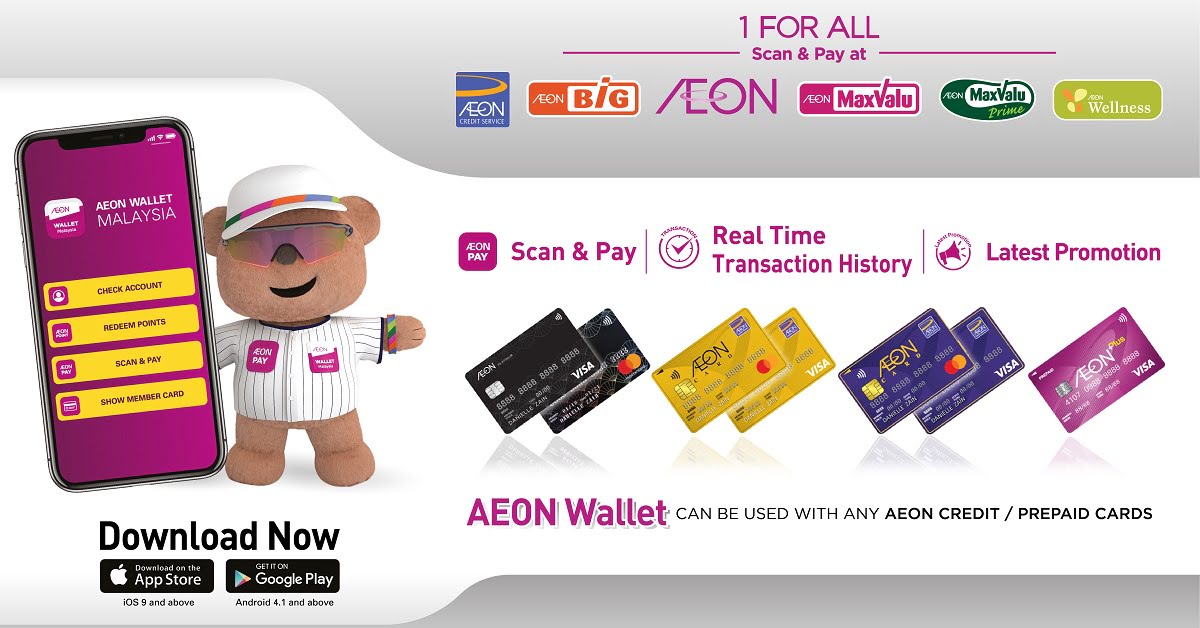 How Does The AEON Wallet Stack Up Against The Competition

Retail conglomerate AEON has taken its first steps into the larger world of digital payments. The AEON Wallet app is not so much an independent effort as it is part of a larger group ecosystem from AEON Group to provide a better shopping experience.

Having the backing of a huge corporation certainly has its benefits, especially if that corporation provides access to the biggest chain of departmental stores in Malaysia. That said, can it compare to the more established competition?

In this comparison, we will be looking at the new AEON Wallet, Boost, Grab Pay, Samsung Pay, and MaybankPay. These generally represent the more widely available options for Malaysians.

Samsung has the clear advantage when it comes to payment technology, having spent a lot more money on the proprietary Magnetic Field Transfer (MFT) system. This allows the phone to simulate the magnetic strip on a credit card; and allows it to work with any credit card terminal that allows swiping.

The other four are based off a Quick Response (QR) code scan to register payment information. These are a little less technologically advanced, making them easier and more economical for merchants to implement than a credit card terminal. Allowing smaller merchants to adopt the payment method; and is why you are starting to see it technology in the pasar malam as well.

One minor thing to note is that these e-wallets are mainly intended to be used for small everyday purchases. Each has a spending limit of around RM1,000 per day; with Boost Pay requiring an additional level of verification to unlock this limit. Samsung Pay is an exception to this rule as it has a lower daily spending limit of RM250.

All these e-wallets are available on the same platforms, at least in general. The main exception is Samsung Pay. It runs on the Android operating system, but is also limited to selected Samsung Galaxy branded smartphones. More importantly, not all of these smartphones feature the MFT technology either (removing a huge reason to use Samsung Pay).

In this case, the AEON Wallet has a leg up on the competition. The e-wallet itself is not a standalone product and is tied to the AEON Members Plus Visa Card, prepaid card. Because of this, the payment system is also available in an offline form. For the moments when your phone battery is dead and you really need to pick up groceries.

Every one of these e-wallets has some sort of way of gaining points when you spend credits; and then providing a catalogue of vouchers to spend those points.

AEON expands on this with providing rewards through its own in-store rewards. Allowing the users to accumulate AEON Points by using the app. In this case, it provides special prices on selected items, reduced parking fees, and even access to the AEON Thank You day (all of which are benefits of the AEON Members Plus Visa card). Users can accumulate AEON Points with AEON Wallet for shopping at AEON Co, AEON BiG, AEON MaxValu, AEON Wellness.

Let’s face it, the real selling point for any e-wallet is how often you’re able to use it. There’s no point in signing up for one that isn’t accepted by any stores. In this regard, Samsung is likely the most accessible. Thanks to its massive network and international availability. Yes, the Samsung Pay wallet works anywhere your credit cards do. Allowing it to seamlessly travel around the world, or at least to countries where it’s officially available. Again, the only drawback to Samsung’s solution is that it is limited to a single platform.

MaybankPay doesn’t work outside of Malaysia, while GrabPay technically ‘works’ within Southeast Asia. In this case, it’s a matter of the payment system being available in the region; but the wallet cannot convert currencies. Leaving the user to top up with the local currency when they reach a new country and then being unable to use it when they leave.

This is worsened by the fact that GrabPay deactivates currencies that aren’t used after 12 months.

The AEON Wallet app doesn’t work overseas, but that doesn’t mean it’s completely left out of the conversation. AEON’s solution is tied to the AEON Members Plus Visa Card; which is incidentally backed by Visa and can be used globally. In other words, you can still partially benefit from the ecosystem even if the app isn’t available.

At the moment, each e-wallet fills its own niche. Covering specific segments of society and their own use cases. GrabPay is great for people who make heavy use of Grab’s services, while Boost and MaybankPay are better for everyday purchases. Samsung Pay is essentially a more premium service for those already locked into the ecosystem.

So where does the AEON Wallet fall? AEON Wallet is mainly targeted at supporting AEON stores to provide better shopping experience. This is not exactly a small number, and a significant portion of Malaysians do their weekly shopping at one of the many AEON branches.

Is there a single e-wallet to cover everyone? Not likely. The current market is fragmented, with each provider using its own unique QR code system. Systems that are not yet interchangeable. This is slowly changing, with CIMB introducing its own proprietary QR codes that can be used across multiple e-wallets like Boost and vcash.

Similarly, Maybank and Grab have an agreement to allow their e-wallets to share a payment system.

AEON is essentially the new kid on the block, and will take a while to expand its network. For now, the AEON Wallet makes sense if you’re a heavy AEON shopper. It collects your payment and loyalty cards into a single place, which is overall more convenient. And convenience is all we really want from our technology.