Budget 2015 marks the beginning of the last lap (11th Malaysia Plan) before the finishing line in our race to achieve an advanced and high-income nation status by the year 2020. In line with the purpose of the vision, the theme of the upcoming budget is “Accelerating Growth, Ensuring Fiscal Sustainability and Prospering the Rakyat”.

In conjunction with this vision, various measures are to be taken under the upcoming budget to help the people cope with the rising cost of living. These include increasing food production levels, as well as curbing profiteering by the middlemen and speculative activities. The Domestic Trade, Cooperative and Consumerism Ministry will continue to step up enforcement and monitor prices of goods and services more closely to ensure they are not overpriced.

Besides that, the Government is also looking into ways of how the people can be empowered through better education and skills upgrade to increase productivity and to earn higher wages, to be able to better afford the rising living cost. The Government believes that these measures will continue to stimulate growth and improve the country’s fiscal position and the people’s standard of living.

From April 2015, the Government will be introducing Goods and Services Tax (GST) at 6% to replace the current Service and Sales Tax (SST) at 16%. This new and equitable tax system will help expand Government revenue streams, reduce Government debt and invest for the future.

With the Budget 2015 just around the corner, here are some of what the rakyat expect from the upcoming Budget:

1. What are your expectations of the Budget 2015, in terms of living cost reduction? 2. What is your opinion of GST? 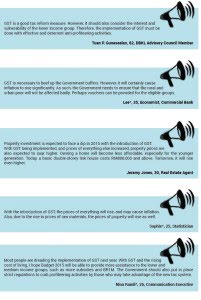 3. What can budding entrepreneurs expect from this Budget?

4. Will sin tax be increased further this Budget?

Based on most of the comments we collected, the biggest concerns are what the Government will do to help the rakyat in dealing with the rising cost of living and also preparing for GST. Perhaps the Government will introduce some game-changers that will alleviate the burden that Malaysians are carrying – from affordable housing and cars, to better quality of education.

Though the Government will introduce some measures to alleviate the high cost of living in the country, its hands are also tied due to their strict fiscal consolidation programme to trim its budget deficit and debt.

According to Bank Islam Malaysia Bhd chief economist Mohd Afzanizam Abdul Rashid in a report published on The Star, while the rising cost of living and higher interest rate environment will be key considerations in formulating Budget 2015, measures to address some of the predicaments faced by the rakyat will be limited due to the Government’s resolve to stick to its fiscal consolidation programme to cut its budget deficit and debt.

BR1M hand-out for the lower income group is likely to be increased, in view of GST, and hopefully the quantum of distribution will be revised to ensure the money given will not be used recklessly, but does really go towards supporting the rakyat’s increased expenses.

For those who are wishing for higher subsidies in essential goods, especially fuel, they may be in for disappointment, as the Government is set to conduct further subsidy rationalisation activities. This is one of the key strategy reducing the fiscal deficit and also the country’s debt.

However, all speculation and forecasts aside, for now, we will just have to wait and hope for the best, until October 10, 2014, when the Prime Minister Datuk Seri Najib Tun Razak reveals the plan.

Here’s what was announced in Budget 2014 last year.