Have you ever wondered how much actors earn to portray your favourite superheroes on screen? Find out below, and you jaw may just hit the floor:

As an influential superhero, Superman possesses extraordinary powers, including super strength, super speed, heat vision, acute hearing, and even super breath! He can fly across the solar system to stop meteors from hitting the Earth or sometimes just to clear his head. He has an incredibly dense body structure that could be pierced by almost nothing.

We have seen three Superman on the silver screen and two on our telly, but the highest paid Superman was Henry Cavill in the 2013’s remake.

A bite from a radioactive spider causes a variety of changes in the body of Peter Parker, which gives him superpowers that make him, Spiderman. As Spiderman, he has the ability to cling to walls, possesses superhuman strength and speed and a “spider” sixth sense that alerts him to danger.

The best part came with him shooting webs from his wrists – used as a strand to swing from building to building or to form a net to bind enemies.

Only two actors have so far played Spiderman on the big screen, Tobey Maguire and Andrew Garfield. The former was the higher earning actor for playing Spiderman – with a total of US$36.5 million (RM130.2 million) for the three instalments (exclusive of the back-end value).

Batman, or also known as the Dark Knight of Gotham City was a silent guardian, a watchful protector, and incorruptible defender. A man full of mysteries, he bought corporations in the day and fought crime in the night. He wore a cape, body armour and battled supervillains as a night time hobby. And none of us would forget his amusing butler, Alfred.

Although there have been five actors who have portrayed the Batman role on the silver screen, the most expensive King of the Gotham City was Christian Bale. He was paid a total of US$54 million (RM192.6 million) for the Batman Trilogy.

Tony Stark hailed from a wealthy family. He was a genius – obtained admission to MIT at the tender age of 15 to study electrical engineering. After his parents were killed in a car accident, he inherited his father’s company, Stark Industries.

In a booby trap set by his enemies, Tony Stark is injured and was held captive. His injuries was dire and the shrapnel was moving towards his heart. His fellow prisoner, a physicist, saves him by constructing a magnetic chest plate to keep the shrapnel from reaching Stark’s heart. They then designed a suit of powered armour, which Stark used to escape from his enemies.

Later, Stark discovers that the shrapnel fragment lodged in his chest cannot be removed without killing him, and he is forced to continue wearing it. He uses the suit to protect the world as Iron Man – pretending to be Stark’s bodyguard and corporate mascot

By playing the rich and playboy and industrialist Tony Stark aka Ironman, Robert Downey Jr. has topped the Forbes List for Top Earning Actors. He is the one and only Ironman we seen on the big screen and so far he has earned US$205 million (RM731.0 million) just by portraying the superhero Ironman since 2008. 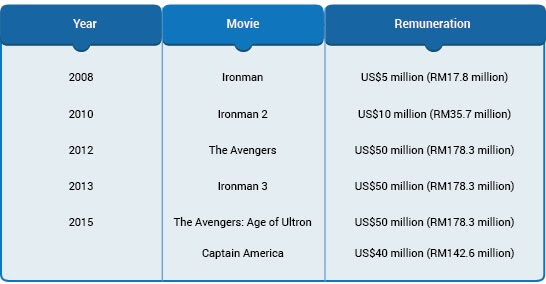 The majority of us would have grown up watching different superheroes via comics, cartoons, TV series and on the big screen. Each of us have our personal favourites, with our own justification as to why we liked or disliked them.

However, it is not easy making superheroes believable in today’s jaded and cynical world. We have these actors to thank for doing a great job, and letting us immerse in the world of good versus evil.

So, which is your favourite superhero?

The Avengers aren’t just good at saving the world, they also know a thing or two about money!

Don’t have the moolah to be a movie buff? We’ve got you covered with these best credit cards that rewards you for every movie you watch at the cinema!