Is The Pocophone F1 Really Value For Money?

In case you haven’t heard, Chinese smartphone maker Xiaomi has introduced a new smartphone that promises to compete with the Samsung Galaxy Note 9 and iPhone X; at less than half the price.

It sounds like a fantastic promise. Especially for those who look at the prices of flagship smartphones and wonder who has that kind of money to throw around. But is it really worth sinking your money into this?

Firstly, two comparisons must be made. One based on the hardware profile of the Poco F1 against the flagships it wants to compete against; and the second is against a similarly priced smartphone.

At first glance, there are a lot of big numbers that probably don’t mean much to the average person. But, we will try to break it down into simpler terms.

As far as size and displays go, the Galaxy Note 9 wins out. It’s not only bigger (for those who want a bigger phone), but Samsung’s Super AMOLED displays are known to produce more vivid colours than regular LCDs. Not to mention that it squeezes more pixels onto the screen for a sharper picture. On the other hand, the Pocophone F1 and Honor Play both have similar Full HD resolutions and IPS LCD displays. Not bad, but pretty standard fare for smartphones.

Then there is hardware performance. For the most part, it’s difficult to compare different processors. Especially since each company tries to focus on a different performance aspect; like AI, image processing, or speed.

But there is one metric that tells us how well these smartphones compare against each other: benchmarking software.

While the Galaxy Note 9 crushes the Honor Play in terms of hardware performance, it still somehow lags behind the Pocophone F1. Something impressive considering that Xiaomi is selling its flagship killer for about a third of the price.

That said, the difference between the Pocophone F1 and the Galaxy Note 9 isn’t that big. Most regular people won’t notice a couple of hundred points difference in their day to day usage. Not unless you happen to enjoy running a lot of apps at the same time.

What really matters. The Camera. 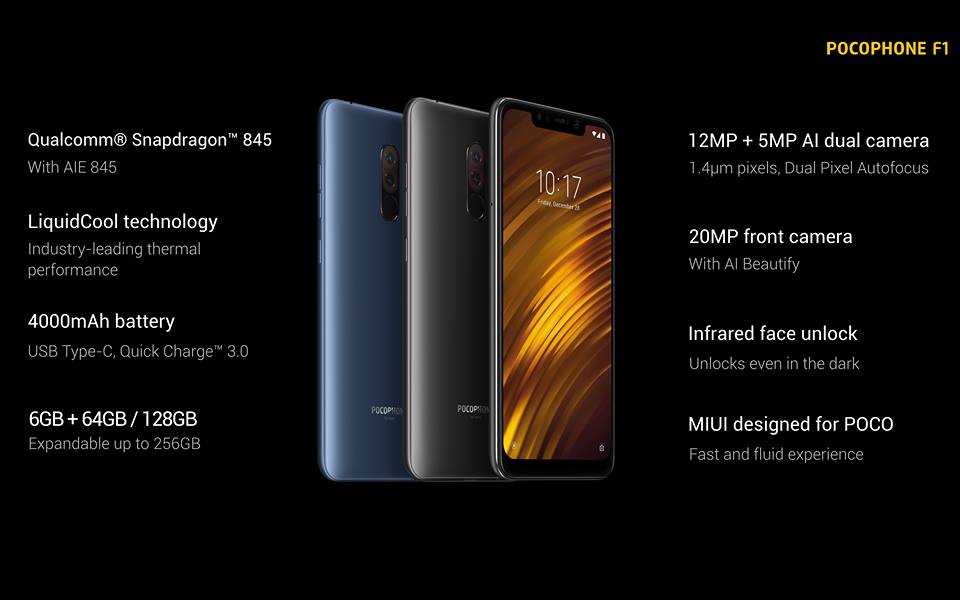 A huge factor in the success of a smartphone is the camera setup. “Does it take good pictures” is practically the first question that’s asked when buying a new phone.

In this case, the Pocophone F1 has a reasonably attractive setup. Dual cameras have improved smartphone camera quality since Huawei introduced the concept with the P9. In this respect, the phone should at least outperform similarly priced phones that usually only sport a single rear camera.

Sample images from reviews show that it takes relatively good pictures for the price point. Comparable to the much more expensive Galaxy Note 9 – at least in daylight. At night, it’s another story. The pictures can occasionally get grainy and lose detail; partially because of the lack of Optical Image Stabilisation or OIS.

OIS is a system of springs that suspend the camera lens and minimise the impact of shaking hands. It generally translates into nicer pictures that get more attention on Instagram.

That said, it does feature Electronic Image Stabilisation. Which tries to get software to do what OIS does. It’s not as good. Most flagship level smartphones use a combination of the two systems for the best results. But it is adequate for the price point.

On the other hand, sample pictures from the Honor Play show similar results. A camera that works well in well-lit areas, but struggles in low-light conditions which gives it a rather similar profile to the Pocophone F1.

So is it really value for money?

Cards with the lowest income requirements.

Yes, yes it is. At least as far as these short term tests can tell. There’s more to a mobile phone that just how well it takes pictures and the price. For instance, iPhones only develop the mysterious screen flickering problem after a year or two of use while the Huawei P10 has a sensor that gets stuck after about a year. Xiaomi phones have also been known to develop battery problems.

So is this worth your time? Probably. It’s too early to tell if any problems exist with the Pocophone F1. And as far as we know, it will work perfectly fine for a reasonable amount of time. Reasonable because you’ve just paid RM1299 for a device that would have cost RM3500 from any other company.

In fact, you could even buy a second one as a backup phone and still come out ahead.