That version of Budget 2018 projected an expenditure of RM258.52 billion with RM200.16 billion allocated to operating expenditure and RM58.35 billion on development.

The federal budget projected an expenditure of RM280.25 billion, of which RM234.25 billion is dedicated to operations and RM46 billion to development with RM2 billion in contingencies.

It even trained its guns on the Prime Minister’s Office and lobbied for a budget reduction from RM20.8 billion to a more “acceptable” RM8.4 billion. 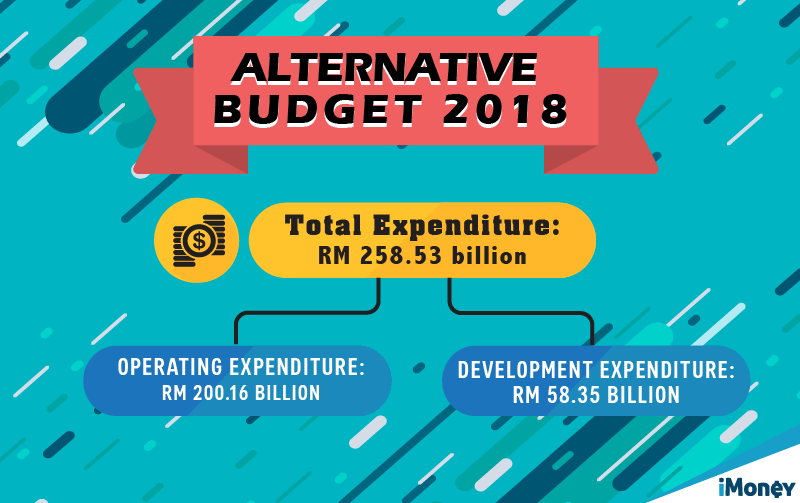 While providing a critique of 72 pages of policy requires more time and space than one article can afford, here are the three major policy proposals that deserve some attention:

The good: Raising expenditure for health and education

One of the major selling points of the alternative budget is: more spending on higher education and health ministries.

Prioritising both ministries, the coalition said it needed to check the decline in the standard of healthcare and public universities.

This year’s federal budget however injected more funds into both ministries. The health ministry received RM26.58 billion which is 9.5% or a RM1.7 billion increase compared to what it received in the 2017 budget.

Both education and higher education received more next year. The former is allocated some RM46 billion, a RM3 billion increase, while the latter receives RM1.61 billion more at RM13.89 billion from the previous RM12.28 billion.

Strangely, Pakatan did not explicitly state how much will be funnelled towards education or health, so it gives of the impression that the coalition doesn’t actually realise the gravity of their proposals.

Some of Pakatan’s policies are laudable such as placing greater emphasis on Technical and Vocational Education and Training (TVET with the goal of strengthening apprenticeship programmes.

So under this programme, host companies are given funding to conduct on-the-job training for selected TVET students who can then go on to obtain jobs in the same companies in the same sector.

As for health, the coalition said it was necessary to deal with all complaints from the public on the shortage of medicine and inability to carry out much-needed health tests.

Kelana Jaya MP Wong Chen, who was also part of the policy team behind the budget, said that much needs to be pumped into health and education by way of a higher allocation for development expenditure.

According to the federal budget, the Prime Minister’s Office received RM12 billion, or the lion’s share of the development expenditure, while health and education only received RM1.8 billion and 1.4 billion respectively.

While the raising of health and education expenditure is great, the only caveat in the Pakatan budget document on these areas is that there is no proper breakdown on how much the coalition needs to spend in the long run.

Healthcare costs are expected to skyrocket due to a list of factors, from medical tourism to the spike in non-communicable diseases. Education on the other hand needs serious policy considerations, given that our quality of education is already questionable if we were to consider the disqualification from the Programme for International Student Assessment (Pisa) two years ago.

Sorry folks, abolishing the goods and services tax (GST) is not going to solve your financial woes. What’s confusing is the opposition coalition’s plan to abolish the tax but still keep its reporting system.

Despite being regressive in nature, the GST is a more transparent form of tax as opposed to its predecessor, the sales and services tax.

One of the reasons for removing the SST is that the system encouraged leakages and the taxation of exports.

For example, studies have shown that Malaysia has large capital outflows which can’t be reconciled in the national accounts. As much as 80% is said to be from transfer pricing where firms transfer costs to various centres around the world to minimise tax.

With the GST, it makes the process more difficult because complete records are kept at every stage of the value-adding process.

There are records of who sells to you and at what price and the same for yourself, all along the supply chain. It’s just a matter of working your way down the chain to see if people are playing around with the figures. So it’s not just capital outflows but all manner of things, even those who are avoiding duties or evading taxes.

Nurhisham Hussein of EPF observed that despite all the talk about GST being regressive, the tax incidence is actually highest on the upper middle income group. Removing the GST, he said, is actually a tax cut for the urban elite. Which makes sense since with the GST system, it’s harder to evade taxes.

The coalition also states that there will be a 20% consumption boost from abolishing GST. The problem lies in this assumption that the coalition makes. For example, in the manifesto, it is assumed that this 20% boost will lead to higher transactions in the property and car markets.

The property market is soft because of an unsustainable boom. The National Property Information Centre (NAPIC) recently revealed that completed but unsold residential units ballooned to RM12.26 billion for the first half of this year from about RM8.56 billion a year ago. Malaysia is undergoing what’s known as an “overhang”.

Also getting Malaysians to buy property inadvertently go against another one of the coalition’s policies which is to reduce household debt to 75% of GDP over the next five years. The current household debt stands at 85.6% to GDP.

The car market is also depressed simply because of the available of public transport and ridesharing operators Grab and Uber. So how that 20% would translate by way of car and house purchases is a mystery.

The coalition has expressed its intention to reduce fuel subsidies for low-income earners if it won federal power.
It said it would bring back petrol subsidies which would be targeted at the B40 group by limiting the subsidies to motorcycles and small cars of 1,000cc and below.

Pakatan also says it will use a targeting mechanism based on the IC of the consumer which would ensure that only Malaysian citizens benefitted from the subsidy.

It is a well-known fact that the fuel subsidies mostly benefits the better off. While targeting the poor makes sense, administering such distributions will prove to be nightmarish.

For example, who is going to check whether the car is 1,000cc and below, or even whether they have an IC or not. It’s a system that attracts more problems than solutions.

According to data from Bank Negara Malaysia, the richest, or T20, benefitted from fuel subsidies receiving 42% while the bottom 20% of households only received 4%.

Fuel subsidies were among the heated topics debated during our Pre-Budget Facebook Live session and two economists, namely Dr Muhammed Khalid and Dr Jomo Kwame Sundaram, argued that it was impractical and the worst thing to do for the country. They proposed that subsidies be channelled towards the public by way of public transportation.

Muhammed in particular said it was the worst thing to do to help the poor. He urged a review of the definition of poverty, saying that as a developing country, what needs to be looked at was the relative term of what being poor meant and not just merely looking at income.

Well, let’s put it this way: the Pakatan budget is an alternative to the federal government’s version.

Both budgets are just plans. That’s the key thing to remember when analysing the feasibility of either one’s budget proposal.

That said, there are a lot of questions that Pakatan Harapan did not answer, for example their intention on keeping its reporting system and zerorising the GST.

Also they intend on making tertiary education free. While that might get parents smiling ear to ear, what it is lacking is how are they going to pump billions into public universities on the back of a huge number of cuts such as the abolishing of tolls and the GST?

To their credit, they did express some intent on taxing other forms of revenue such as inheritance and capital gains from the selling of stocks and shares. But they stopped short by saying they would only do so if they needed to.

If you go through their documents, there are other important issues they raised such as the need for better fiscal reporting and accrual accounting, reforming state finance, and the setting up of a heritage fund from oil and gas revenues.

But perhaps the best way to sum up the Pakatan Harapan budget is this: it is a budget that panders to its constituencies – the elite and middle class.