Home › Latest Articles › GST › Naikwatch: 5 Common Misunderstandings You May Have About GST

Naikwatch: 5 Common Misunderstandings You May Have About GST

We are finally on the other side of the Goods and Services Tax (GST) discourse, post April 1, 2015. Before the first day of April, most discussions about GST were mostly theoretically, with many people unsure of how it would directly affect their wallet. After April 1, though there are many who are still confused with how GST works, we can now see exactly how much our finances will be affected.

Having a plate of nasi lemak, buying a toothbrush, and buying certain health supplements are now costing you more than before.

Two weeks after the implementation of GST, we can see that having zero-rated and exempted supplies don’t mean the cost of our everyday bills are not going up. In fact, we had a debate on prepaid reload recently — on whether should consumers pay for 6% GST or should it be absorbed by telcos, like how they did the Sales & Services Tax (SST).

As the Government, the businesses and the consumers, fine-tune their understanding, and also the rules and regulations that come with the implementation, here are some common misunderstandings that you may have about GST, answered in the simplest way:

1. Every shop or business has to charge GST starting April 1.

This is not true. Only businesses that are registered for GST are allowed to charge GST on standard-rated items. Businesses that have a turnover of at least RM500,000 a year are compulsory to register, while others can voluntarily register to charge GST.

To check if the business is registered to charge GST, check if the receipt or tax invoice for your purchase has the 12-digit GST ID. You can also counter check the GST ID and the company name on Customs website. 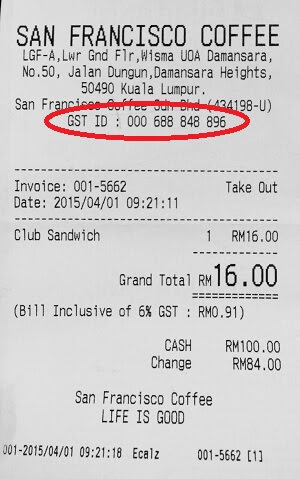 2. Eating rice at a restaurant will be GST-free since rice is exempted from GST.

Some of us may think that by knowing what are the GST zero-rated and exempted items are, we can avoid paying GST. Basic foods like rice, chicken and vegetables are all zero-rated items, but by ordering these items at the restaurants does not mean you are exempted from paying GST.

These items are only zero-rated in their raw form. For example, buying rice grains at the hypermarket, or vegetables from the market will not incur GST. However, once they are processed and cooked, for example in the form of fried rice, you would still be charged 6% GST by the restaurant.

Check the sundry list to see what are standard-rated, zero-rated or exempted.

3. I’ll save money by buying my goods from a non-GST registered shop.

Ideally, prices should not go up if the shop or business is not registered for GST. For example, a bottle of bath soap should not increase price if you buy at a non-GST registered sundry shop, compared to buying it at the hypermarket.

However, unknown to the consumers, their operation cost might go up as their suppliers would be charging them GST, and they are unable to claim for it. To keep their profit, they might just increase their selling price.

4. Eating out will be the same, since the 6% GST will just replace the 6% Government Tax.

However, there is a slight difference, as previously the government tax is not applicable to the 10% service charge. Here is the difference between the bill before and after GST:

Based on the example above, though the difference is not a huge amount, there is a slight increase in prices when it comes to dining out.

5. Zero-rated and exempted items are the same thing. Both prices will not change after GST.

In an ideal world, it is right to think that way. Unfortunately, businesses are still businesses, and at the end of the day, it’s all about their profit margin.

From the consumers’ point of view, both zero-rated and exempted items seem the same — both will not be charged GST. However, if we understand what each of these terms really mean, we will understand how they can affect our prices.

Exempted on the other hand, means the businesses are not allowed to charge GST at all, and they are not eligible to claim input tax too. One of the examples of exempted supply is residential property.

This means that even though the property developer is registered for GST, they could not charge the buyer GST, or claim the GST input tax from the GST incurred in their business operation. While some of the prices of goods or services may be going down, such as milk and detergent (according to the price guide released by the Domestic Trade, Cooperatives and Consumer Affairs Ministry), the prices of others things are still going up.

It is worrying that without education and awareness, consumers may sit on their hands in the false sense of security that their cost of living will not be impacted by GST.

Regardless of the economic terminology, consumers still need to save money wherever they can to accommodate rising costs in some areas of their finances. They need to know how much prices are going up, and what are the items that are affected.

As a social initiative, Naikwatch 2015, a project initiated by Cilisos and iProperty, allows consumers in Malaysia to participate by just answering a few questions on their smartphones or tablets, on the rising cost of living.
Having your regular instant noodles increased in price by a few cents may not seem impactful to your finances, but these things often have far-reaching implications on the average Malaysian’s spending behavior.

The Naikwatch survey allows you to share your experience. The first result will be released in the third quarter of 2015.

Let your voice be heard at www.naikwatch.com.