Make Your Dreams Come True With Maybank And Manchester United

Ask any football fan what their dream is, and chances are they’ll tell you that it’s the chance to catch their favorite football team in action, live and in person.

For Manchester United fans, the opportunity to watch players like Paul Pogba, Cristiano Ronaldo, and Jadon Sancho weave their magic in person at Old Trafford will be a dream come true.

However, for most Malaysians, that wish is a really expensive one. Hence, for a lot of Manchester United fans, the idea of catching their favorite team in action and taking in the atmosphere of Old Trafford remains very much out of their reach.

Now, Maybank is offering a once-in-a-lifetime chance to win an all-expenses paid trip to Old Trafford for two with the Maybank x Manchester United 10 Years United Anniversary campaign. Five lucky winners with their partners will enjoy a Premier League game featuring Manchester United, a meet and greet session with a Manchester United players or legends, and a stadium and museum tour!

With the festive holiday season in full swing, there is no better time to celebrate and stand a chance to win this trip. Let’s get started.

How to win a trip to Old Trafford in England

All you have to do is make sure that you’re one of the top five spenders using the Maybank Manchester United Credit or Debit Card during the campaign period.

Anyone who follows the Premier League and Manchester United will know that the season hasn’t really gone according to plan so far, leading to the decision to get maverick German coach, Ralf Rangnick to help right the team’s course.

So, Maybank is actually offering you a chance to catch Manchester United and their stable of stars under the guidance of the legendary Ralf Rangnick as they prepare to create a new era of Manchester United!

Second step: Spend a minimum of RM3,000 with any eligible Manchester United Cards. Winners will be selected based on the highest spend throughout the campaign period.

This also means lots of shopping and dining, as you prepare to celebrate Chinese New Year with family and friends. Now with the Maybank Manchester United Cards, you get great rewards for yourself as you celebrate with your loved ones!

Besides the chance to win a once-in-a-lifetime trip to Old Trafford in England, there are a lot more benefits and offers during the Maybank x Manchester United 10 Years Anniversary campaign.

20% OFF Football Gear*. Enjoy a 20% discount when you shop for your favorite football gear at Sports Direct outlets nationwide from now till 31 January 2022.

Time to reward yourself with a Maybank Manchester United Card

To be eligible for this campaign, all your purchases need to be made using a Maybank Manchester United Credit or Debit Card, so here’s how to apply for one today.

So which card should you get? Well, that depends on what you need.

Don’t worry, to help you make your decision, here are all the cards on offer in the Maybank x Manchester United 10 Years United Anniversary campaign. 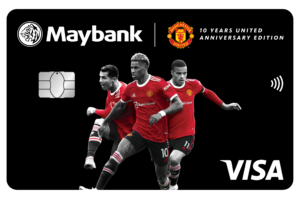 Looking for a credit card for your daily use? Then you can’t go wrong with the Maybank Manchester United Visa Gold Credit Card. This credit card waives off your annual fee forever, which means that you will never have to pay your annual fee with this card.

With a sleek design featuring Manchester United superstars such as Cristiano Ronaldo, Marcus Rashford, and Mason Greenwood this credit card is the perfect credit card for you to show off your love for Manchester United! There are limited quantities available, so get yours while you still can right here. 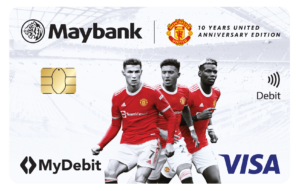 This card is a limited edition card featuring Paul Pogba, Jadon Sancho, and the GOAT himself, the talismanic Cristiano Ronaldo on the card. What better way to show you’re a Manchester United fan than to have the GOAT himself gracing your debit card.

This card is only available in limited quantities, so act fast to get your hands on. Other card benefits include tracking your online transactions via Maybank2u. There is no income requirement to apply, plus no finance and late charges or annual fees.

Note: Customers need to walk-in to any Maybank branches nationwide to replace/apply for this card.

If you’re a frequent traveler who needs a credit card for overseas spending, then the Maybank Manchester United Visa Infinite Card is the perfect card for you.

With this card, you’ll be getting complimentary travel insurance coverage worth up to RM2 million when you use it to buy your flight ticket, and you’ll be enjoying bonus points with AirAsia, MAS, and Singapore Airlines.

The English Premier League 2021/2022 season is in full swing, so what better way to finish the season on a high note by winning exclusive merchandise, or watching a game live in Old Trafford. So, what are you waiting for? Get your Maybank Manchester United Card right here, and show everyone how you’re the biggest Manchester United fan around!