Home › Latest Articles › Investment › Investing In Sukuk: How Does It Work?

Investing In Sukuk: How Does It Work?

Since the early 2000s, Sukuk (the Arabic name for financial certificates) have become a viable alternative for fund raising by corporates and sovereigns.

The first corporate Sukuk, worth RM125 million, were issued in Malaysia by Shell MDS in 1990, followed by Bahrain in 2001. In the same year, Kumpulan Guthrie Berhad, a Malaysian corporate also issued the first global corporate Sukuk. Later, the Malaysian government issued the Malaysia Global Sukuk, a landmark Sukuk Ijarah worth US$600 million, and became the first country in the world to issue a global sovereign Sukuk.

Since then, Sukuk have been growing in popularity and have been utilised by both corporate sector and states for raising financing.

This figure is expected to climb to US$250 billion by 2020, according to a reported released by Thomson Reuters entitled “Sukuk Perceptions and Forecast,” at the 21st Annual World Islamic Banking Conference in Bahrain.

Think of Sukuk as Islamic bonds that are structured in a way to generate returns to investors. They are issued and traded in compliance with the principles of Shariah, which prohibit “riba” or interest.

When you buy bonds, you are essentially loaning money to the issuer for a fixed period of time. You will receive a predetermined interest rate, which is usually paid annually within that fixed timeframe. The value of the bond is repaid at the end of the period and you get your money back.

However, because Shariah law prohibits the generation of money from money (such as interest or “riba”), financial instruments that involve the trading and selling of debts, and conventional loan lending (which includes conventional bonds) are not permissible.

This is where Sukuk comes in to fill in the gap between Islamic financing and the global capital market.

How does Sukuk work?

Sukuk represent certificates of equal value that evidence undivided ownership or investment in the assets using Shariah principles and concepts endorsed by the Shariah Advisory Council.Essentially, when you invest in Sukuk, your money is put into the assets of a project or investment in order to generate profit. The investor receives a margin of that profit based on a pre-agreed ratio.

When investors buy Sukuk and become Sukuk holders, they receive a certificate from the issuer to evidence ownership, and are entitled to receive periodic profit payments on the principal amount invested. Upon maturity, the Sukuk holder will get back the principal amount of investment.As with most Islamic financial instruments, there are different methods of achieving the same objective, and the above is just one method of doing it. For instance, the periodic profit payments may come in the form of profit-sharing or rental from the asset.

These different methods are characterised by the different types of Sukuk below:

What are some of the different types of Sukuk available in the market? 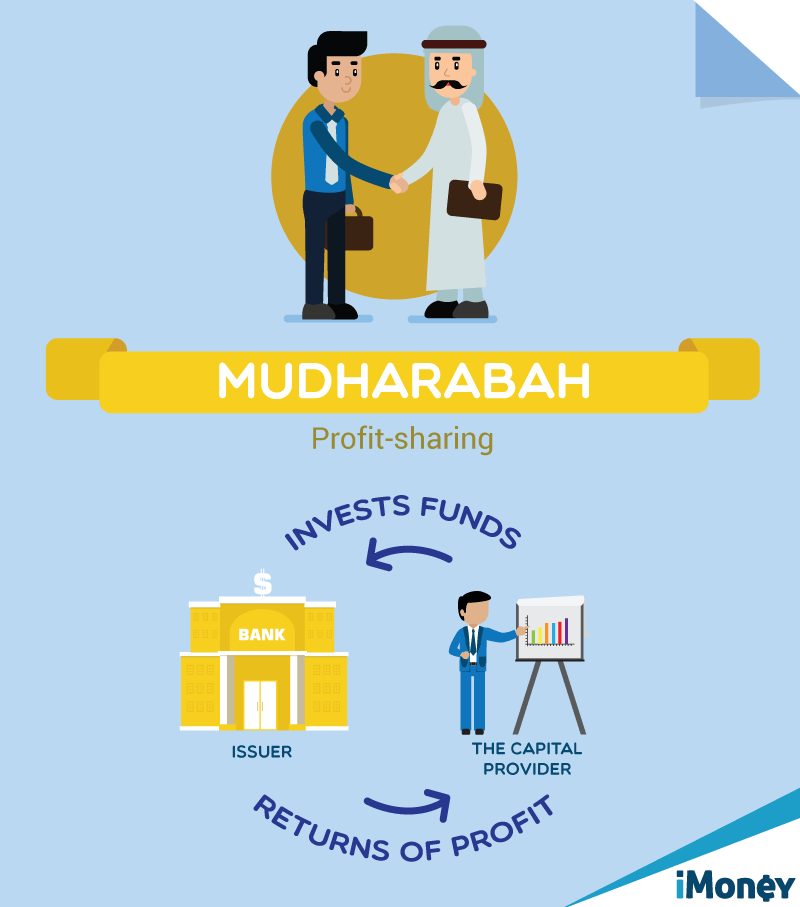 A profit-sharing contract between two parties – an investor and the Issuer.

All profits in the venture will be shared based on a pre-agreed profit sharing ratio. However, in the case of loss – all will be borne by the investor unless there it was due to negligence or mismanagement of the venture where the loss will then be borne by the Issuer.

The investor will supply the entrepreneur with funds for his business venture. In return, the investor will get a return on the funds he puts in based on a profit-sharing ratio.

The main principle in a Sukuk mudharabah is that, the investors are dormant business partners who do not participate in the management of the underlying asset, business or project. The party who utilises the funds on the other hand (the issuer), is the working partner.

The profit from the investment activity is shared between both parties based on a pre-agreed ratio depending on how well the asset or project performs. Losses suffered will be borne by the investor.

However, Sukuk mudharabah should not contain a guarantee from the issuer for the capital or a fixed profit, or a profit based on any percentage of the capital. 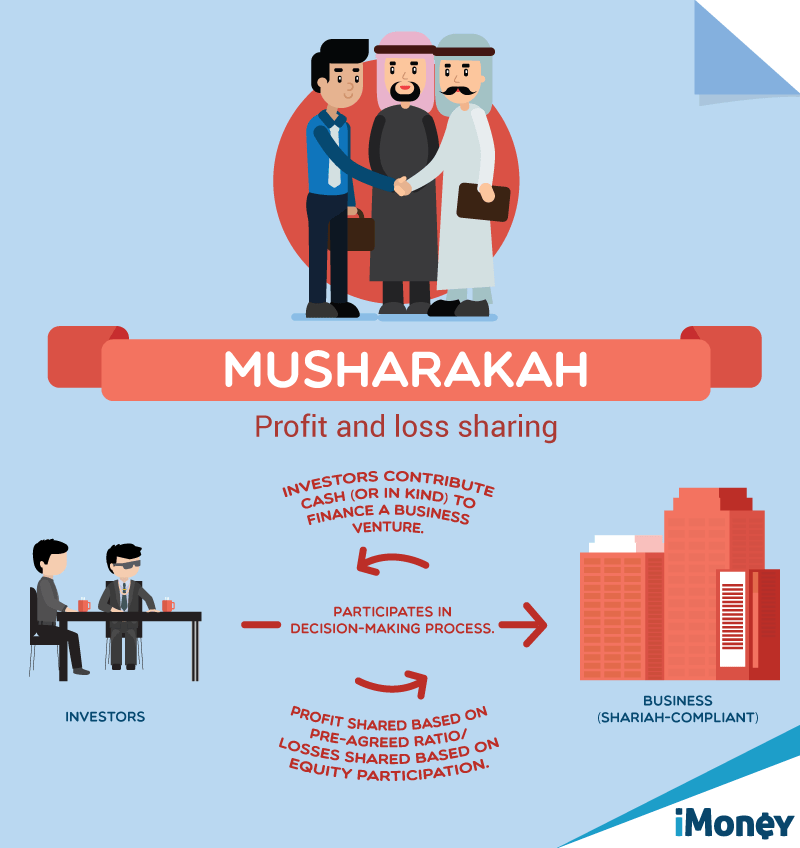 A partnership between two or more parties to finance a business venture.

All parties contribute capital to it either in the form of cash or kind for the purpose of financing this venture.

The profits for the venture will then be distributed based on a pre-agreed profit sharing ratio. However, losses are shared based on the basis of capital contribution.

The musharakah contract supports a joint business venture. All parties contribute capital either in cash or in kind for the purpose of financing a project or business venture (that must be Shariah-compliant)..

The contract specifies a profit-sharing ratio and indicates that the obligor will contribute assets (such as cash or property) to the joint venture.

With Sukuk Musharakah, the Sukuk holders (investors) are the owners of the joint venture, asset or business activity. 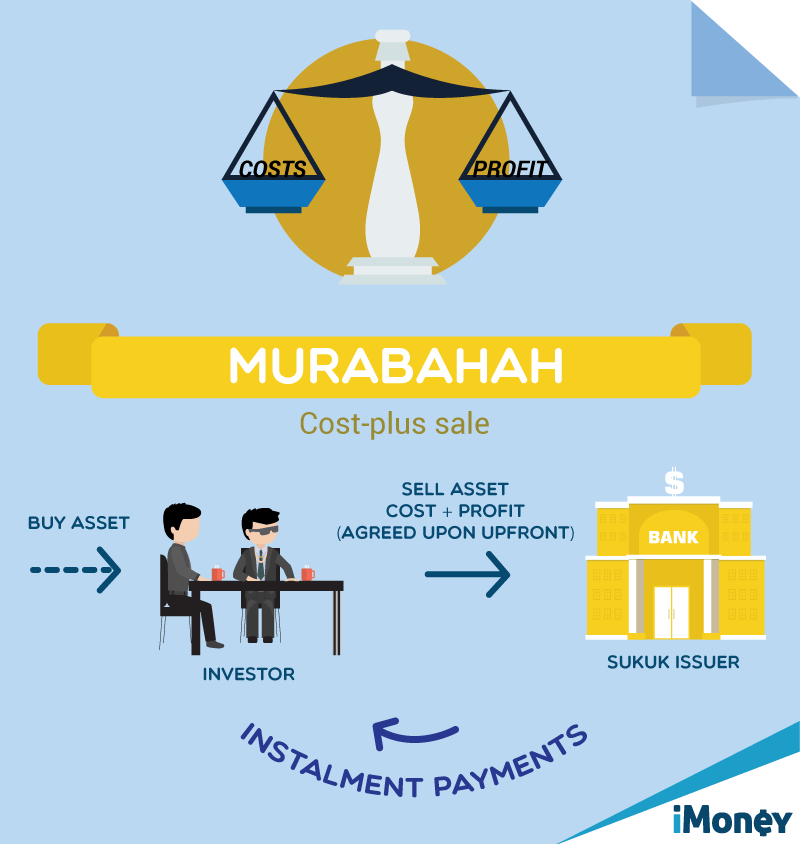 A contract of a sale and purchase of assets where the cost and the profit margin (the marked up price) are made known to all parties.

A murabahah contract is an agreement between a buyer and seller for the delivery of an asset.

For example, the Sukuk holderbuys an asset in order to supply it to the Sukuk issuer who has no capacity to purchase the asset directly.

The holder then sells the asset to the issuer for the cost-plus profit – a mark-up that both have agreed to upfront.

The issuer then makes payments to the holder on an installment schedule.

In general, it is a contract in which a party authorises another party (usually an agent or “wakeel”) to act on behalf of the former based on the agreed terms and conditions as long as he or she is alive.

Here, a wakeel could be appointed to manage the wakalah portfolio with the aim to generate an agreed-upon profit return.

When the investor and wakeel enter into a wakalah agreement, the contract will govern the appointment, scope of services and fees payable to the wakeel (if any).

In a wakalah agreement, the investor will only receive the profit return agreed between both parties at the outset. Any profit in excess of the agreed-upon profit return will be kept by the wakeel as a performance or an incentive fee.

The wakeel is not held to be a partner in the arrangement and therefore, does not need to share the risk of loss in the agreement. A contract where the owner of an asset (lessor) leases it out to a lessee at an agreed lease rental for a predetermined lease period. However, the ownership of the asset itself is not transferred and will always remain with the lessor.

The Sukuk Issuer with the funds raised from the Sukuk holders will purchase an asset and then lease it back under an Ijarah contract. The rental payments will then be paid back to the Sukuk holders at set intervals.

Some salient features of ijarah include that the lessor must own the specified asset for the full lease period. If the lessee defaults on payments or delays payments, the lessor cannot charge compound interest.

Finally, the leased asset’s use is specified in the contract.

The market for Sukuk is now maturing and there is an increasing momentum in the wake of interest from issuers and investors. A growing investor base also validates Sukuk’s viability as an alternative means to mobilise medium to long-term savings and investments. Also, investing in something with underlying assets is always more comforting.

However, one drawback is that each country have their own interpretation of what is Shariah-compliant and what is not, and such interpretations may vary across the board. Such differences between Shariah and other legal perspectives can sometimes result in complications.

According to Moody’s Investors Service in its recent analysis entitled, Islamic Finance: 2015 Malaysian Sukuk Volumes Will Be Stable, Driven by Refinancing, Malaysia remains the largest and most liquid Sukuk market, with a deep institutional investor base.

Moody’s Global Head of Islamic Finance, Khalid Howladar said they expect a slightly lower total Sukuk bond issuance in Malaysia in 2015, when compared with the US$20bil (RM72bil) in 2014.

However, he noted that Malaysia’s declining share of global issuance reflects the increasing internationalisation and diversity of Islamic capital markets.

Industry players are also optimistic that Islamic banks will continue to issue Sukuk in addressing the maturity mismatches between their assets and liabilities, and to improve liquidity management.

The report also highlighted that future growth in Sukuk issuance in Malaysia would be driven by strong demand from local investors, and coordinated and supportive policies from the Government for Islamic finance.

A large and growing base of Shariah-compliant sectors in Malaysia, as well as the increasing familiarity and comfort with Sukuk instruments among global investors also contribute to the segment’s growth.

As Sukuk and other Shariah-compliant products are expected to grow by leaps and bounds over the years, it is important that investors understand how these products work in order to not miss out a piece of the pie.