Prime Minister Datuk Seri Najib Razak will unveil the 2017 budget tomorrow and he is expected to put a raft of “people-centric” measures in a move to assuage Malaysians unhappy with the rising cost of living.

Poor oil prices have squeezed Southeast Asia’s third-largest economy with growth slowing in each of the last five quarters, reaching 4% in April-June. Public debt as a percentage of gross domestic product is just shy of Malaysia’s 55% ceiling, rising from 43% in 2008.

Since Najib took office in 2009, populist measures have been a theme of the federal budget with the focus being on cash aid to low-income households and development projects in rural parts of the country.

Next year’s budget however will be challenging for the Najib administration as any widening of the fiscal deficit at a time when the economy is cooling could risk downgrades to Malaysia’s sovereign rating.

Below are some items that could feature at the tabling of the budget, compiled from media reports and research notes:

Allocation for the 1Malaysia People’s Aid (BR1M) has been on the rise since its inception in 2012.  According to asset management firm Affin Hwang, the distribution of cash assistance through the BR1M will continue in Budget 2017 with the possibility of a higher quantum.

The BR1M was introduced to assist households that fall into the low-income group and singles that earn less than a stipulated amount each month. This acts to spur the domestic economy by increasing the disposable income among the lower-income group. But with the rising cost of living burdening the population, the one-time payment is likely not enough to help recipients. 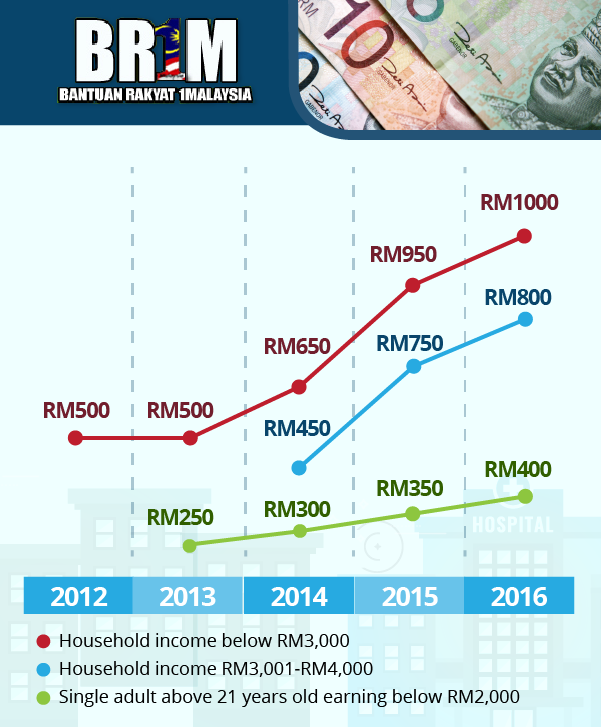 Putrajaya is studying the possibility of granting tax relief to the middle 40% income bracket (M40) under the 2017 budget to help cope with the rising living cost, says Minister in the Prime Minister’s Department Datuk Abdul Rahman Dahlan.

However, Maybank Investment Bank, as quoted in a Reuters report, believes there will likely be no cut to personal income tax rates though there may be more provisions for tax relief next year.

The goods and services tax introduced in April 2015 will likely be maintained at 6% to avoid any disruption to household expenses and cost of doing business, says Affin Hwang.

Second Finance Minister Datuk Johari Abdul Ghani has mooted a proposal to increase the allocation for funds available for low-cost housing purchases under the Employees Provident Fund to 40% from 30% of savings in Account 2.

The First House Deposit Financing (MyDeposit) scheme might be extended to more buyers, says RHB Research. Introduced this year with an allocation of RM200 million, the scheme was aimed at helping up to 30,000 first-time homebuyers with down payments.

A larger Account 2 allows members to pay the down payment for their first home, but that comes at a risk of eating into their retirement fund. Extending the MyDeposit scheme also might empower more to purchase their first house as up to RM30,000 is covered by the government.

Small and medium enterprises (SMEs) play a critical role in Malaysia’s economy, contributing close to 36% of the country’s overall GDP and 65% to overall employment in 2014. This is expected to continue with the upcoming budget.

SMEs may receive further incentives under the budget, says Minister in the Prime Minister’s Department Datuk Seri Wee Ka Siong. He said SMEs contributed 39% of the gross domestic product last year and account for 98% of all businesses worldwide.

Chinese newspaper Oriental Daily reported that prices of several categories of cooking oil will increase next month with more details to be revealed during the budget speech.

RHB expects cuts to be made to subsidies for daily necessities such as flour and cooking gas.

Currently, the ceiling price for a 14kg cylinder is RM26.60, while subsidy for 25-kg bag of wheat flour was removed earlier this year.

According to Chinese paper Sin Chew Daily, Putrajaya is considering an exemption for first-time car buyers from excise duties for local and imported small models assembled in Malaysia.

In a survey conducted by Ford, 55% of Malaysian respondents said they spent more time in traffic compared to last year. Cheaper cars will likely exacerbate the situation especially among the urban dwellers.

The Health Ministry is expecting the same amount it received last year, before the revision in early January this year. The revision saw the ministry receiving a 10% cut, losing about RM250 million.

Deputy Health Minister Datuk Seri Dr Hilmi Yahaya said despite having to operate under budget constraints this year, the ministry would be happy if Najib maintained the 2016 allocation in next year’s budget.

Next year’s budget will likely see the government carry out a tight rope walk in alleviating the high living cost and property prices among the B40 and M40, while still reducing the country’s fiscal deficit.

Stay tuned for more coverage and analysis of Budget 2017 tomorrow.