Budget 2015: Can You Afford Your First Home Now? Among the biggest problems faced by Malaysians in recent years is the exorbitant property prices that has rendered many buyers, especially those residing in the Klang Valley, unable to afford their first home.

Nowadays, a condominium unit in prime locations such as Subang Jaya or Petaling Jaya can easily cost over RM600,000. With 4.45% interest over a 35-year loan tenure, buyers will need to fork out at least RM2,802 every month (not forgetting the 10% down payment) for the most basic unit.

Given that the mean monthly household income in Malaysia is about RM5,000, according to the 2012 findings by the Household Income Survey (HIS), it is no wonder that owning a home has become an elusive dream for many.

Infrastructure investments such as the new Light Train Transit (LRT) and Mass Rapid Transit (MRT) lines will also have an impact on property prices.

Last week, Prime Minister, Datuk Seri Najib Tun Razak tabled the 2015 Budget with aims to address the rising cost of living. Let us examine some of the measures announced and their implications on the property market at large.

Married young couples between 25 and 40 years with a household income not exceeding RM10,000, can now look forward to owning their first property with the Youth Housing Scheme (YHS).

YHS, a partnership between the Government, Bank Simpanan Nasional, Employees Provident Fund (EPF) and Cagamas, offers RM200 financial assistance every month for the first two years and also 100% home loan financing, including cost of mortgage insurance (with 10% loan guarantee from the Government)

Under YHS, the Government will give a 50% stamp duty exemption on the instrument of transfer agreements and loan agreements. The maximum loan period is 35 years. 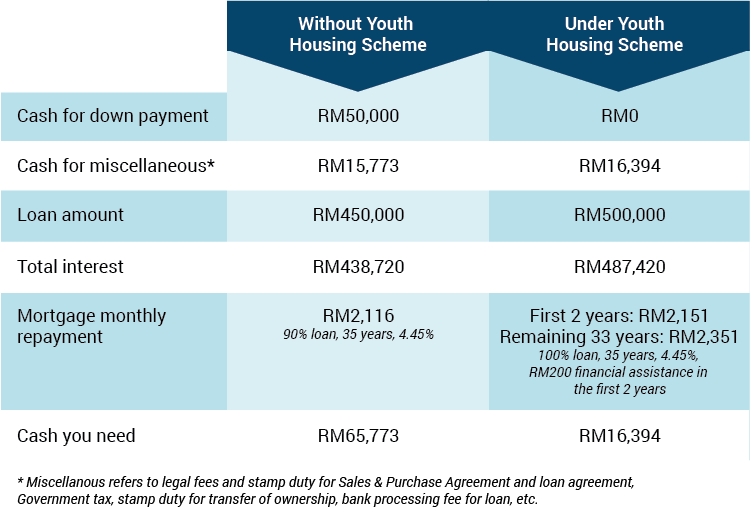 If you are one of those who are lucky enough to secure a property under RM500,000, with 4.45% interest, over a 35-year tenure, your home loan monthly repayment will come up to RM2,116. However, you will need to fork out RM50,000 for the down payment, as without the YHS, you will only be eligible for 90% margin of finance.

With YHS, qualified applicant will get 100% financing and RM200 financial assistance from the Government for the first two years. This translates to RM2,151 monthly home loan repayment (or about 43% of an average monthly household income of RM5,000) and results in RM4,800 savings in two years, excluding the amount you save from the down payment.

Without having to fork out that RM50,000 in cash for down payment, property ownership becomes much more feasible for people who qualify. However, with a RM500,000 loan amount, you will be incurring RM46,300 additional interest. This may not seem like a good idea for those with cash for down payment, but for those who are having difficulties saving the cash. It will also come in handy if you want to keep the cash you have for renovation or other miscellaneous costs.

However, the number of 20,000 units allocated under the scheme is hardly sufficient to meet the housing demands of the people. There is an estimated 1.6 million people living in Kuala Lumpur alone.

Needless to say, singletons will have to work harder, both in finding a property they can afford to buy and a significant other.

Although housing is exempted from GST, the construction costs involved are not. Once GST is implemented beginning April 1, 2015, 6% GST will be imposed on various aspects of property development such as land cost, material cost (concrete, steel, roof tiles, bricks), labour cost and so forth.

Experts predict that the margin of increase will be about 3% for residential properties following the implementation of GST.

Experience from other countries such as Australia had witness trends in anticipation of future-cost drive inflation of asset prices. Already, Malaysian buyers have been rushing to snap up property in the two quarters prior to April 2015, while developers are rushing to complete their projects pre-GST.

Post-GST, property demand is expected to taper off due to the rush in buying the year before. The increases in prices could also price-out many buyers.

There is speculation that there will likely be a one-off increase in property prices across the board. The secondary home market should also see a knock-on effect in prices.

In the long term, the property market will likely adjust to GST and property activities should return to normal, given that demand and supply move accordingly upon changes in things like interest rate and loan-to-value (LTV) ratio.

The Government is doing its part in addressing issues of affordable home ownership by mobilising its housing agencies such as the 1Malaysia People’s Housing Programme (PR1MA) Corporation (80,000 units), the National Housing Department (26,000 units) and Syarikat Perumahan Negara Berhad (37,000 units) to fulfil the needs of the low and middle income class.

Extensions of the LRT and MRT

The Government will build a third light rail transit (LRT3) line linking Shah Alam, Bandar Utama and Klang to improve connectivity. This line will complement the network that is currently undergoing expansion to connect the existing Kelana Jaya line to one that runs to Putra Heights. The cost of development for LRT3 is budgeted at RM9 billion and is due to be completed in 2016.

The Government will also start work on the second line of the Klang Valley Mass Rapid Transit (KVMRT) to run from Selayang to Putrajaya at an estimated RM23 billion cost. Construction has already begun on the first line running from Sungai Buloh to Kajang.

Currently, travelling to the northern reaches of the city such as Klang and Shah Alam can be a challenge due to limited public transport options. The KTM Commuter Line running from Sentul to Port Klang is currently the only track that connects Klang and Shah Alam residents to the centre and west of Kuala Lumpur. Unfortunately, KTM is notorious for its poor service and delays, which could drag on as long as 20 to 30 minutes. Meanwhile, Putrajaya is accessible via the Express Rail Link (ERL) from KL Central.

Elsewhere, although Kajang is accessible through networks of highways, which include the North-South Expressway through Kuala Lumpur-Seremban Expressway or through the Cheras-Kajang Highway, congestion is a perennial problem for residents. Motorists can spend hours in the traffic crawl to and fro work on a daily basis.

There are currently about 500 housing estates under the Kajang Municipal Council’s (MPKJ) jurisdiction, some 200 located along the Cheras-Kajang Highway. The rapid development, along with the construction of the Sungai Buloh-Kajang MRT line, which started in 2012, has caused the situation to get from bad to worse.

The new LRT and MRT extensions will definitely be a boon for real estate located in surrounding areas. Paired with the increasing cost of living and decreasing fuel subsidies, property in locations that are easily connected via public transportation will no doubt see an increase in demand among buyers. This could potentially contribute to higher property prices.

Some industry players opine that the measures announced for Budget 2015 are too small to have any real impact on the property market.

While more can be done to reduce transactions and curb speculation in the property market, the Government is certainly taking a step in the right direction with the YHS for first-time buyers and PR1MA to help the lower and middle income group cope with soaring house prices, as well as the upcoming GST.

The upgrade in public transport system also allows urban-dwellers to cut down on fuel and travelling time on their daily commute.

Some experts believe that the escalating cost of living, removal of subsidies and GST will translate to income levels growth. However, how the property market will pan out and whether Malaysians will be able to cope successfully with the post-GST era still remains to be seen.

Want to know more about the Budget 2015? Here is the breakdown.