Home › Latest Articles › Investment › How Does A Bond Or Sukuk Default Affect Your Portfolio? How Does A Bond Or Sukuk Default Affect Your Portfolio?

Bonds, and their Shariah-compliant equivalent, sukuk, are a way for governments or companies to raise money.

When you invest in bonds or sukuk, you’re basically lending money to these institutions. In return, you’ll get periodic interest or profit payments throughout the term of the bond or sukuk. When it matures (i.e. reaches the end of its term), you’ll get your original investment back.

Bonds and sukuk are low-risk investments, as they offer stability and consistent returns. But they aren’t risk-free – you could lose money if your bond or sukuk defaults.

What is a bond or sukuk default?

If a company cannot generate enough income (or collect enough taxes, in the case of governments), it may have trouble repaying its debt. If it can’t repay its bond or sukuk’s interest or principal on time, it is said to have defaulted on its payments. When this happens, you could lose part or all of your original investment.

What happens when a bond or sukuk defaults?

According to the Bonds + Sukuk Information Exchange (BIX), one of the following could happen when a bond or sukuk defaults:

How do you know if a bond or sukuk is likely to default?

In Malaysia, there are two credit rating agencies, RAM and Malaysian Rating Corporation Berhad (MARC). These agencies assess a bond/sukuk to assign it a credit rating, which reflects the company or government’s financial strength and ability to pay back the bond/sukuk.

The credit ratings are represented by letter grades. For example, the highest grade of AAA indicates that the bond/sukuk issuer is very likely to meet the repayments on time. A grade of BBB indicates moderate ability to make repayments. At the end of scale, a grade of C indicates a high likelihood of default, while D means that the issuer has already defaulted.

These ratings are useful to assess a bond/sukuk’s risk rating before you invest. But they’re also handy for keeping track of your portfolio, as these ratings update quarterly. A downgrade in rating could mean that your bond/sukuk is at risk of default. For example, MEX II Sdn Bhd has recently defaulted on its RM1.3 billion sukuk, which has been anticipated by credit rating agencies who have downgraded its rating several times since 2019.

How many bond or sukuk default cases have there been in Malaysia?

The number of bond and sukuk defaults in the past decade has been fairly low. Bonds research platform Bondsupermart points out that Malaysia saw a surge in defaults during the Global Financial Crisis, but has seen single-digit defaults from 2010 to 2020. 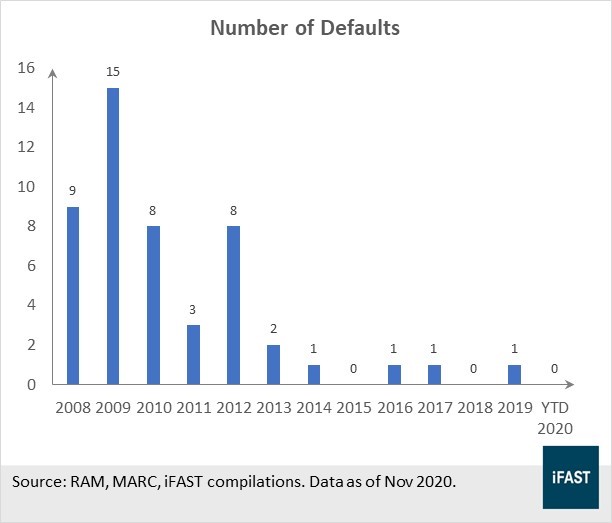 How do you reduce your risk as an investor?

Here’s what you can do to reduce the risk of losing returns or your initial investment:

Besides that, you could diversify into other low-risk investments. For example, money market funds invest in short-term debts that are loaned to banks and the government. These funds carry lower risk than bonds – but they also typically generate lower returns.

You could even make additional contributions into your Employees Provident Fund (EPF) account, which has delivered 5% to 6% annual returns in the past few years. For conventional accounts, it also guarantees a minimum annual dividend of 2.5%.

But don’t forget that reducing risk isn’t the end-goal. Instead, the point is to align the risk of your portfolio with how much risk you can take, which could depend on your age, when you want to retire and your financial obligations.